How Wes Unseld 'paved the way' for Louisville men's basketball

The late Cardinal great was the first Black superstar for the UofL program, who helped turn it into a national power. 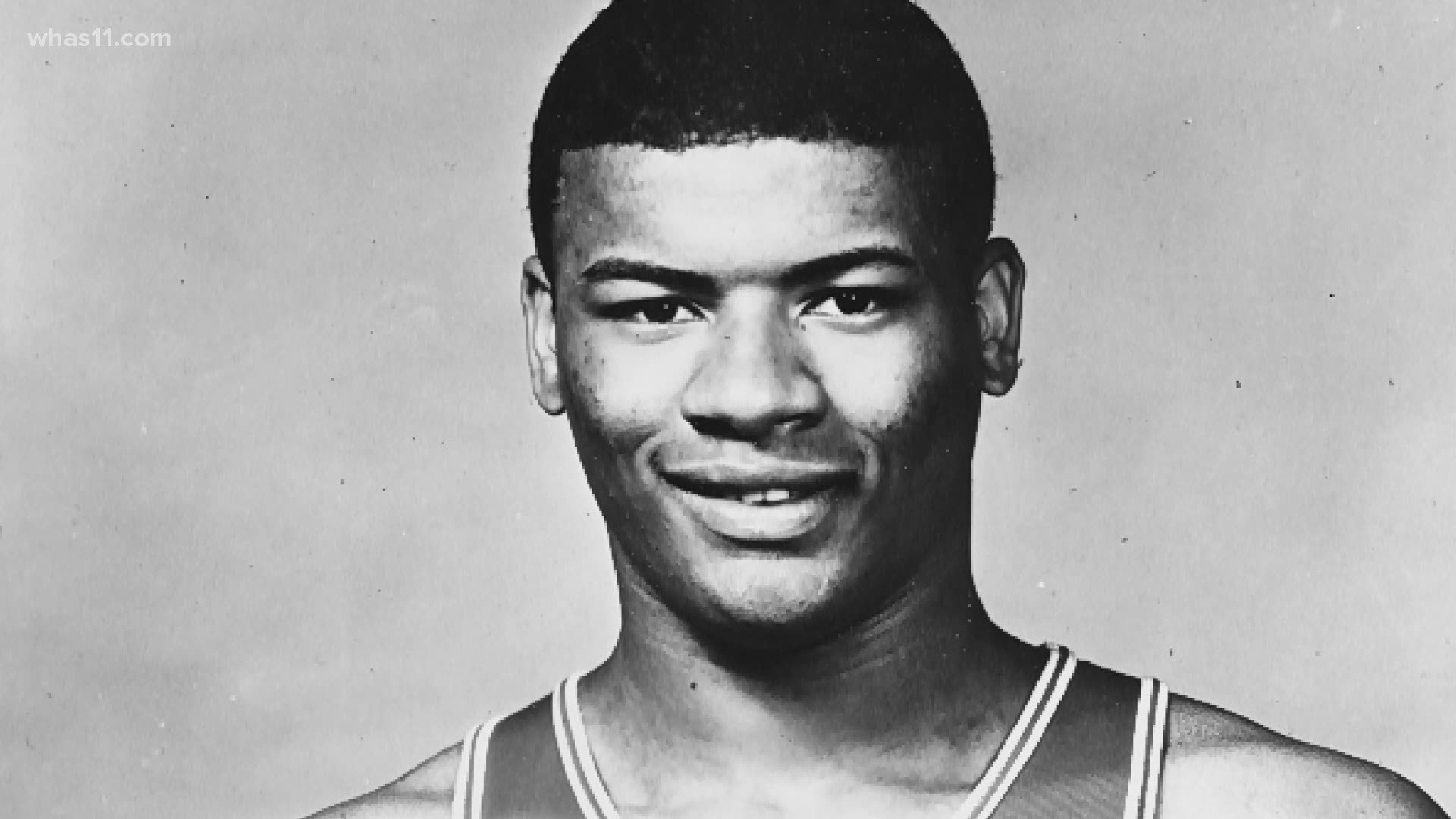 LOUISVILLE, Ky. — Wes Unseld was not the first Black player to suit up for Louisville men’s basketball. But the Naismith Basketball Hall of Famer, who died at the age of 74 back in June, was the one who changed the Cardinal program.

"He paved the way for everybody that came after him at the University of Louisville, that first true African-American superstar,” Darrell Griffith, Louisville’s all-time leading scorer, said.

Butch Beard, a Louisville Athletics Hall of Famer who ranks second in program history with a 19-point per game career scoring average, believes not enough of the current generation of Cardinals understand Unseld’s importance. He recently wrote a letter to the school, asking it to remove his own name from its records until it creates more diversity within its program and properly honors the legacy of Black trailblazers like the NBA champion, MVP and Rookie of the Year in Unseld.

“The letter was written to get the University to understand that they had greatness there in Wes Unseld,” Beard said. “And it should be recognized that he had a tremendous contribution on where the basketball program is today. I'm telling you, if you sat down with any of those kids on that team right now, they couldn't tell you if Wes Unseld was pink, purple, what position he played or anything.”

Beard wasn’t just Unseld’s former teammate at Louisville: He roomed with him for three years. But he befriended his future running mate at the 1964 state basketball tournament, when Beard’s Breckenridge County High School team was on the same hotel floor as Unseld’s Seneca squad.

“We became friends that week,” Beard recalled. “We played dominos and cards. That’s how I got to know him.”

Unseld and Seneca got the best of Beard and Breckenridge in Lexington, winning a second-straight state championship. But Beard also witnessed what the best player in Kentucky was enduring with how those at Memorial Coliseum treated the star, whom the University of Kentucky was recruiting to be the first Black basketball player in the Southeastern Conference as a Wildcat.

“Wes was a little bit of a villain as far as the state was concerned,” Beard said. “He was booed. And it should have never happened. The people should have at least accepted the greatness that they were watching at a very early age.”

It was just a part of the abuse he faced. While considering his options as a recruit, Unseld reportedly received threats and even a dead chicken in the mail for considering Kentucky. And Beard thinks all of it affected one of the state's greatest talents more than he let on.

“He never said it, but I think it hurt him a lot,” Beard said. “Because I think that he felt that the state was trying to take out something on him that wasn't even about him.”

As one of the best players in the country, Unseld had more options than just Kentucky, including the University of Louisville. He ultimately chose to stay at home and join the Cardinals.

"To me, it was a defining moment,” Wade Houston, one of the first three Black players to play men’s hoops for the Cardinals, said. “We talked a lot about just the care and the love we both have because we were both here back in the 60s when a lot of people just didn't know what it was like being a player here."

“I followed him because I knew him,” Beard said. “And I wanted to play with him because he was the best big player that I ever played against or with.”

While proving to be a productive pair on the court, Beard and Unseld also grew close off of it. Beard said there were 15 Black student-athletes on scholarship at Louisville at the time. And the group formed a tight bond with Unseld.

“His mother fed us so much,” Beard said. “We worked with each other to try to make sure that we were successful not only in our particular sport, but to go ahead and see if we could get our degrees and move out to be successful in life. So we pushed each other a lot. And people don’t even understand that we became a little family. And Wes was the part of that family to get us going.”

He was a gentle giant that Beard thinks people mistakenly pegged as a tough guy. But blessed with sheer strength, that toughness could come out, something the roommate learned the hard way when he playfully tried to beat up Unseld upon his return to their room.

“What I was going to do was hit him around his legs, knock him off balance and leave the room,” Beard said with a laugh. “I would maybe go hang out with my some of my friends until he fell asleep and then come back.

“I'm around his legs trying to tackle him. And he braced himself. He says, ‘When you get done doing whatever you're doing, you let me know. Because that's not the smartest thing you've ever done in your life.’ He threw me on my bed and beat my thighs with his fists. I go to practice the next day, I'm black and blue. And Coach (Peck) Hickman is saying, ‘What happened to you?’

“Now, you think I could tell him what the heck happened to me,” Beard recalled with laughter. “No way. But really, he was a gentle giant.”

Jerry King, who scored 1,189 points for Louisville, remembers Unseld as a high-character, humble leader who led by example. And he wouldn’t have to use his size or physicality to let a teammate know when something wasn’t up to his standard.

“In the locker room, he would joke around and had that great sense of humor,” King said. “But then, when you got on the court, he almost would look at you with these piercing eyes. And if you weren't getting a rebound, or your man beat you, you would see it in his eyes: He didn't want to let it happen again.”

The All-American led the Cardinals to two top-ten finishes in the Associated Press poll as well as two regional semifinal berths. From 1965-1968, with the help of Beard and King, Unseld pushed Louisville to an overall record of 60-22, which even included winning the 1966 Quaker City Classic in Philadelphia with victories over Niagara, Syracuse and Princeton.

“They kind of thought that the New York-Philadelphia area was the mecca,” King explained. “But we sure let them know that there was really good basketball being played farther down south.”

Unseld put a stamp on the style in two ways. First, his physical gifts were imposing: long arms, soft hands and thighs that were so thick, Beard said his mother had to cut the big man’s shorts just to fit them through. It all created an intimidating defender and powerful rebounding prowess that resulted in 1,551 boards, ranking Unseld second all-time in Louisville history.

“He used to tell me, ‘Block your man out, count to three and I’m going to get the rebound,’” Beard recalled. “If he was going for a rebound and he got his hands on it, and you got your hands on it, 85% of the time it came out to be Wes Unseld’s rebound”

That led to the second step of his Hall-of-Fame game: an unrelenting unselfishness embodied by scintillating skill as a passer, as shown by the outlet passes that not just made the future NBA Finals MVP famous, but got the Cardinals flying.

“He had the greatest outlet pass in basketball,” Beard said. “I’ve seen Wes Unseld throw the ball up on the glass, turn in midair and hit the glass on the other end of the floor. Not just hit, but almost put a dent in it. That’s how strong his wrists were.”

“It was something to behold because he could almost take it and as he got it off, even before he came down, that ball was flying out to a guard,” King said of Unseld’s outlet pass. “They would be literally at midcourt and that ball came out with force. So it was boom, boom and then we were off and running.”

He eventually ran his way to the highest career scoring (20.6 points per game) and rebounding (18.9 rebounds per game) averages in Cardinal history. The impact though was felt far beyond any record book or statistic.

“I can only think that with the University of Louisville’s success down the road after Wes and I got there that they were able to go out and recruit more African Americans to play basketball,” Beard said.

“The foundation was laid for African Americans from Coach (Wade) Houston and that group,” Griffith said. “And then Wes came. He started to build a floor and expanded the foundation, that footprint in a major, major way to where people could see that this building is getting ready to go up.”

Griffith referenced the five-time NBA All-Star as the first Louisville player he really grew up admiring. A Male High School alumnus, 'Dr. Dunkenstein' captained the Cardinals to a national championship as an All-American in 1980. And as a kid, he was inspired by watching a fellow local legend in Seneca’s Unseld.

Griffith now works for the school as an ambassador to try and spread such a message to kids. His role is partly to increase the profile of the university and expand relationships in support of the school’s strategic plan as well as advancing its Cardinal Anti-Racism Agenda.

In regards to Beard’s letter, he said many things the Cardinal great mentioned “were very valid and they are things former players can reiterate.” Griffith believes Louisville is already ahead of some of those concerns.

Beard said he has spoken with University of Louisville President Dr. Neeli Bendapudi. He believes the ball is simply in Louisville’s court now to move forward and address the issues.

Unseld’s number 31 is one of four retired in Louisville’s history. That honor can be seen hanging in the rafters of the KFC Yum! Center. But these two UofL legends see the first step in properly recognizing his impact as putting something up outside of the arena.

“He needs a statue in front of the Yum! Center,” Griffith, who believes it should’ve happened while Unseld was alive, said. “He is the one.”

“He’s the one who helped put you on the map as an athlete,” Beard said. “He should be honored in that way.”