"We're not going to stop trying to make the world a better place for animals in Kentucky,” Mychell Lawson, founder and president of Kentucky Animal Action, said. 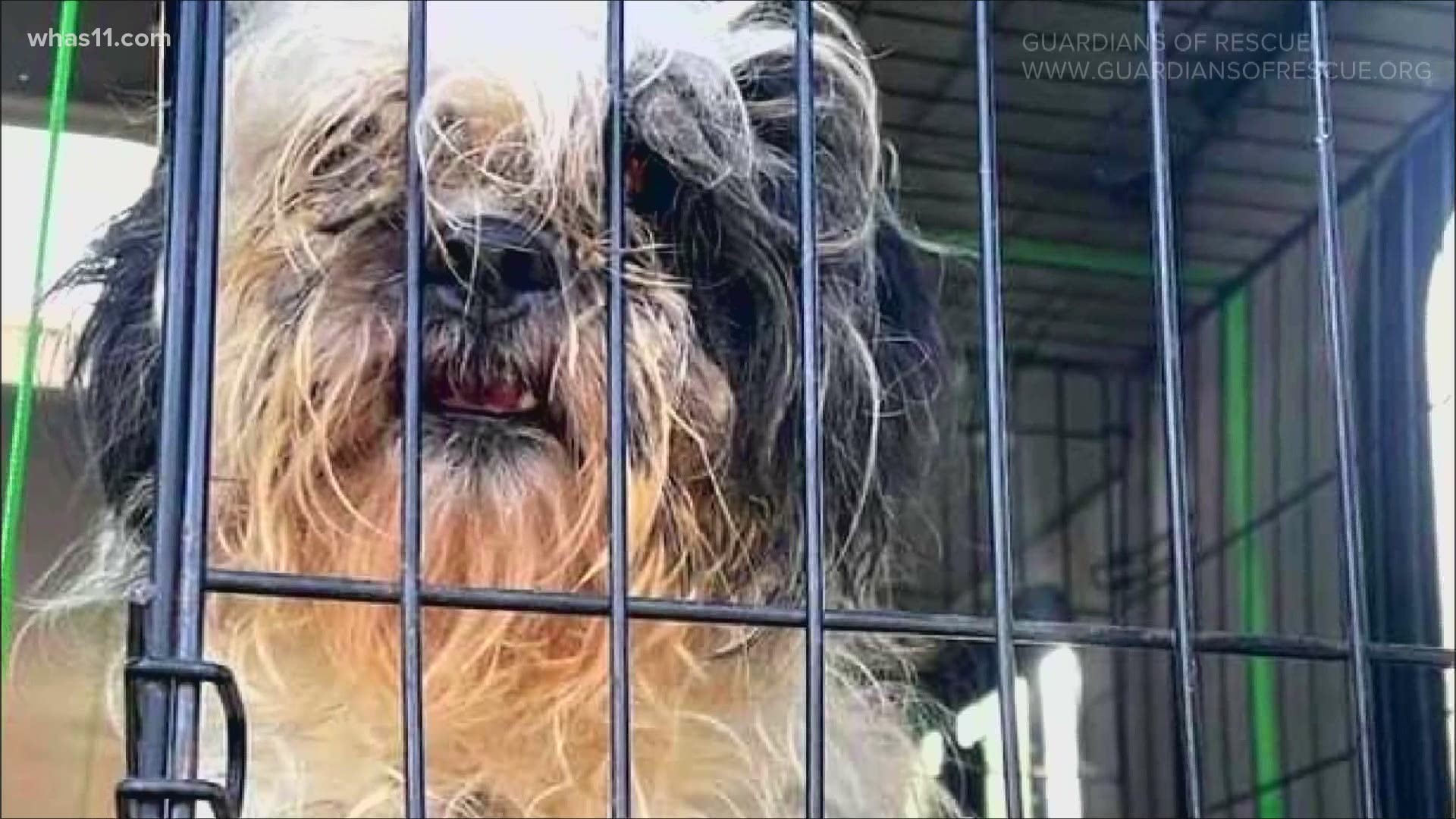 KENTUCKY, USA — In the last two months, Guardians of Rescue has participated in at least five animal rescues.

“We assist animal control, law enforcement, and counties that may stumble across a situation that's larger than what they can handle when it comes to puppy mills, hoarding cases,” said James Houchins of Guardians of Rescue.

The national nonprofit assists in cases like the bust at a home in McCracken County, Kentucky in April. More than 100 animals were seized from the home including more than 70 dogs, kittens, goats, pigs and chickens.

“Dogs were up to their knees in muck,” Houchins said.

The group also assisted with an alleged puppy mill case in Adair County, Kentucky in March. Wearing gas masks and hazmat suits, Houchins and other volunteers carried 132 dogs and nine cats out of the home. Many animals were found dead.

“You would clear a cage out that had 14-15 dogs in it, which was overpopulated, and then you would lift the doghouse and you would find skeletal remains,” Houchins said.

But Mychell Lawson, founder and president of Kentucky Animal Action, fears these cases represent only a fraction of animal abuse in the Commonwealth.

“We lose a lot of sleep worried about the cases that aren't being busted and the animals that are still sitting there waiting for someone to come rescue them,” Lawson said.

She believes that many times the expense of animal cruelty cases is what keeps them from being pursued.

“A lot of large animal cases are not pursued because of the cost incurred with it and that cost goes back in taxpayers, as well,” Lawson said. “When there's a large case, unfortunately sometimes counties have to look the other way because they could be looking at $100-200,000 bill to hang onto these animals during a court case.”

Now, Kentucky Animal Action is working on a 'Cost of Care' bill which would put the expense on the accused offender.

“When there's a large hoarding case, the person being charged either has to pay a decided amount of money to care for those animals while they're in care during the case or if they can't or won't pay that fee, they have to forfeit the animals where the animals can move into adopters or rescuers immediately. And there's not a cost of care for the animals incurred during the court case,” Lawson said.

Lawson has efforted the bill alongside former Louisville Metro Police Officer Joye Keeley. In her retirement, she has been working to expose the link between animal abuse and crimes against humans.

“We need lawmakers to quit looking at the species of the victim and start looking the abusive nature of the perpetrator because it's that abusive nature which will abuse more than one species at a time,” Keeley said.

Keeley contributed to the University of Louisville’s Brandeis School of Law's Journal of Animal and Environmental Law and cited a study that said 82% of defendants in animal abuse cases had also committed other crimes like intimate partner abuse, assault, and child or elder abuse.

“When you see a neglected animal outside or hear an abused animal being abused outside, that could be going on inside with a vulnerable adult or a child,” Keeley said.

“It means that hoarding cases do not make up the majority of neglect cases, but it means that these are a phenomenal amount of animals involved in these 6%,” Keeley said.

According to Keeley, passing the Cost of Care Act would give law enforcement the tools to save more lives—both animal and human—while also saving taxpayers money.

While the bill wasn’t heard on the Kentucky Congress floor this year, it caught the eye of some lawmakers. Kentucky Representative Kim Banta (R) told FOCUS it protects "against huge bills to tax payers" as well as "animals which I support wholeheartedly.”

Lawson said things are changing slowly, but she feels like the momentum is picking up.

“I feel like more people are realizing they can make a difference if they just reach out to their legislators and let them know this is important to them,” Lawson said.

“These animals are voiceless,” Houchins said. "They need help. They need people to speak up and speak out.”

In the McCracken County case, David Howery was charged with 25 counts of cruelty to animals in the 2nd degree. His criminal history revealed an outstanding bench warrant from a previous cruelty to animals conviction in Adair County in 2009. Court records show he plead guilty to more than 100 counts and was sentenced to 12 months in jail. Howery served just 60 days.

“They basically get a slap on the wrist and then just months down the road, they're right back at it, hoarding dogs, breeding dogs, selling dogs,” Houchins said.

"There's a lot we can do better," Keeley said.

These animal advocates will continue to fight for tougher laws and more accountability. Their hope is that revealing more cases like these will rally the support needed for lasting change.

“There are a lot of people like me who aren't going to give up and we're not going to stop trying to make the world a better place for animals in Kentucky,” Lawson said.

TIP: If you're considering purchasing a dog from a breeder, always ask to see the puppy's parents and the living conditions in person. If the breeder says no, that's a red flag. You should report suspected puppy mills to local law enforcement and can also reach out to the Guardians of Rescue.