As districts like JCPS continue with remote learning, internet problems reveal a socioeconomic gap that existed long before the COVID-19 pandemic. 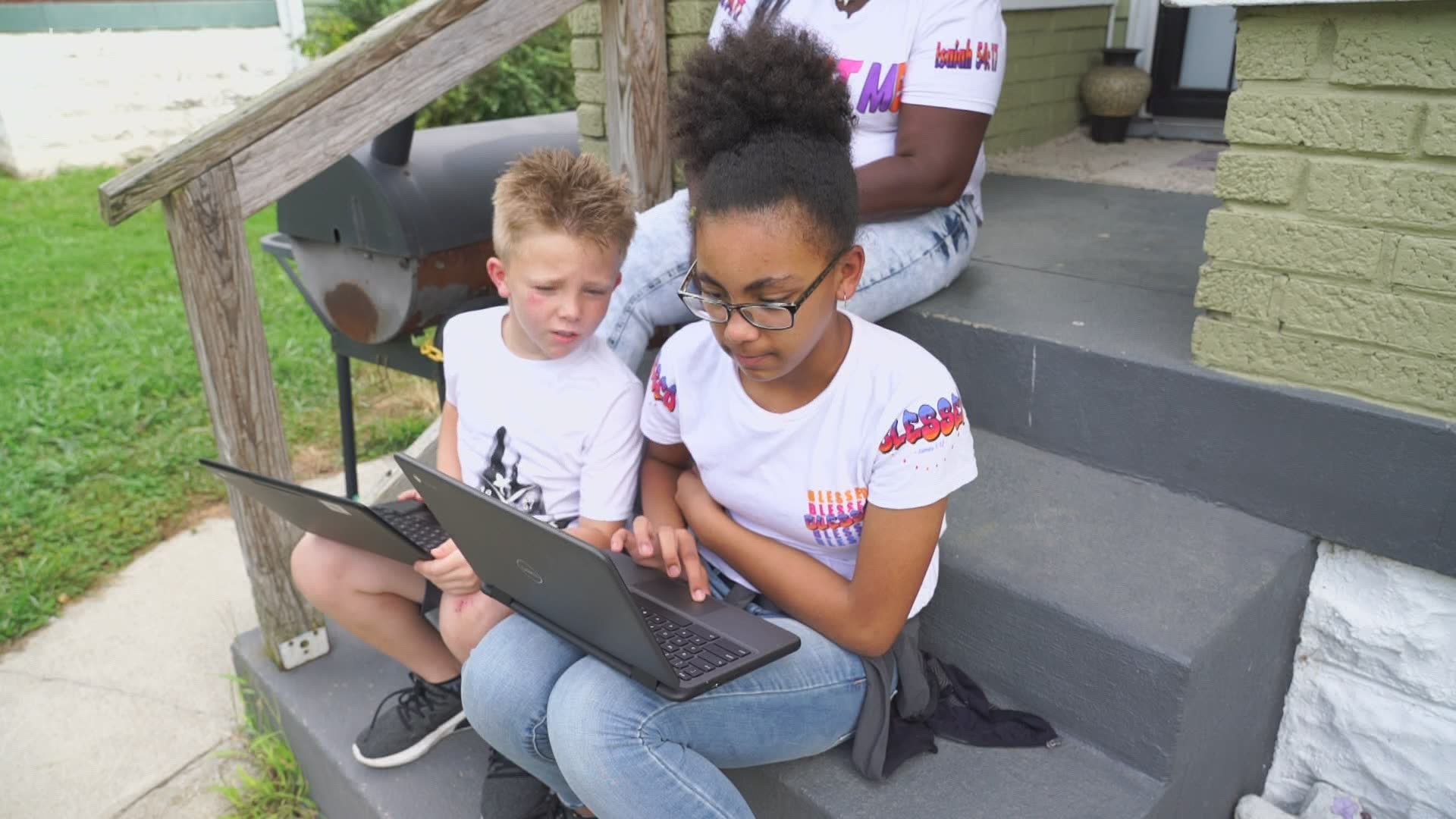 LOUISVILLE, Ky. — As remote learning becomes the new norm for students amid the COVID-19 pandemic, many schools are forced to confront a painful truth: a "digital divide," which some families say makes them feel as if they’ll never catch up.

Lorethia Byrd is a single mother with five foster children. With her kids home all day due to their virtual classes, she said they need more of her attention.

"It has been very challenging, first off I am not able to work," Byrd said. "I still have to help them with things they need help with if the teachers are not online."

For her children Ave Harris-Foster and Kaysan Adams, virtual learning has often meant no learning at all.

"It made me feel like, mad, because I was missing my classes," said Harris-Foster, an 11-year-old student at Western Middle School in Louisville.

Byrd said she has spent hours on the phone with her internet provider, Spectrum.

"I was only able to get through twice," she said.

According to a Spectrum spokesperson, internal wiring, number of devices, location of the router, and level of internet service all impact speed and reliability. Unsecured Wi-Fi can also contribute to a slowdown. They also tell us they're in the process of looking into Byrd's internet problems.

Those factors have never been more impactful since students have been working remotely. For Harris-Foster and Adams, both students in Jefferson County Public Schools, it began when their schools stopped in-person classes in mid-March, citing "a worldwide pandemic."

Since then, the school system has invested $12.5 million to make the transition easier. Now, instead of sharing one Chromebook, Harris-Foster and Adams each have their own. JCPS is also offering free Wi-Fi hotspots for students who need them.

But this family and others we interviewed say it does not solve everything.

The struggle of Byrd and her children reveals a socioeconomic gap that existed long before COVID-19, but one the pandemic highlighted: the "digital divide." It’s the gap between those who have adequate access to technology and those who don’t.

"Our kids aren’t being provided the opportunity to get an education that they need when they can’t access the internet today," said Shelley McKinley, a vice president at Microsoft.

McKinley has been working to close the digital divide, in areas like education. Her company, Microsoft, is partnering with local internet service providers to build infrastructure in mainly rural communities across the U.S that lack access. She's working on Microsoft’s Airband Initiative, with a goal of expanding broadband access to three million people in the U.S. by July 2022.

"We don’t actually know how big the digital divide is. And that’s because the data that’s collected is woefully inaccurate," McKinley said.

McKinley is talking about data from the Federal Communications Commission that shows about 93% of Kentucky has broadband, or high-speed internet, available to them. But McKinley said the portion of the state’s population actually using internet at broadband-speeds is about a third of that, at roughly 31%.

McKinley said this digital divide is driven, in part, by the fact many families can’t afford high-speed internet. In the Louisville area, broadband service usually ranges between around $60 and $126 a month. Prices vary depending on the provider.

To understand the challenges of online learning, WHAS11 spoke with teachers around the state who have watched some in their virtual classrooms fall behind.

Pam Elkins, an eighth-grade social studies teacher at South Laurel Middle School, said she has noticed a digital divide. She said schools in her area are providing each family with one Chromebook. Every school in the district is now a hotspot.

"And kids can sit in the car and do their work if they don’t have good, working internet at home," Elkins said.

Their cars become classrooms -- something Elkins said her students are often embarrassed to admit.

Louisville teacher Amber Recktenwald has seen the digital divide play out in her classroom too.

“It doesn’t make you feel good at all," said Recktenwald, a second-grade teacher at Wilt Elementary School in Louisville.

As some students falter, she said she feels mounting pressure.

“You’ve got to take kids and catch them up and try to make them back on grade level," she said.

Harris-Foster and Adams said every day is a fight for education, saying they worry about their future. Both said they're concerned about failing their classes if their internet fails them.

“Will I be able to get on my class? Will I pass?" Harris-Foster said.

“If it would keep on saying no internet...and like I couldn’t pass and go to another grade and I would get held back, I would be mad," said Adams.

Kentucky Governor Andy Beshear has recommended schools wait to start in-person classes until Sept. 28, to prevent the spread of COVID-19. The unintended consequence of remote learning, according to many researchers, is a widening education gap, with students who lack access to technology and support at home scrambling more than ever to keep up.

JCPS spokesman Mark Hebert said the school district has done everything in its power to ensure every student has access to the technology needed to connect with their teachers.

"While the digital divide is real, requiring a community-wide commitment in Louisville and most other U.S. cities, JCPS is doing more than its part to bridge the gap," Hebert said in an email.

Families can go to Jefferson County Public Schools’ NTI web page for help with remote learning. Some places, like the Frazier Museum, have also opened "NTI camps" to help working parents find a place for their student to learn.