'I just can’t believe that they’re still at it': Puppy scam victim speaks up

A Louisville woman is speaking up after falling victim to a scammer when she attempted to purchase a French Bulldog puppy online. 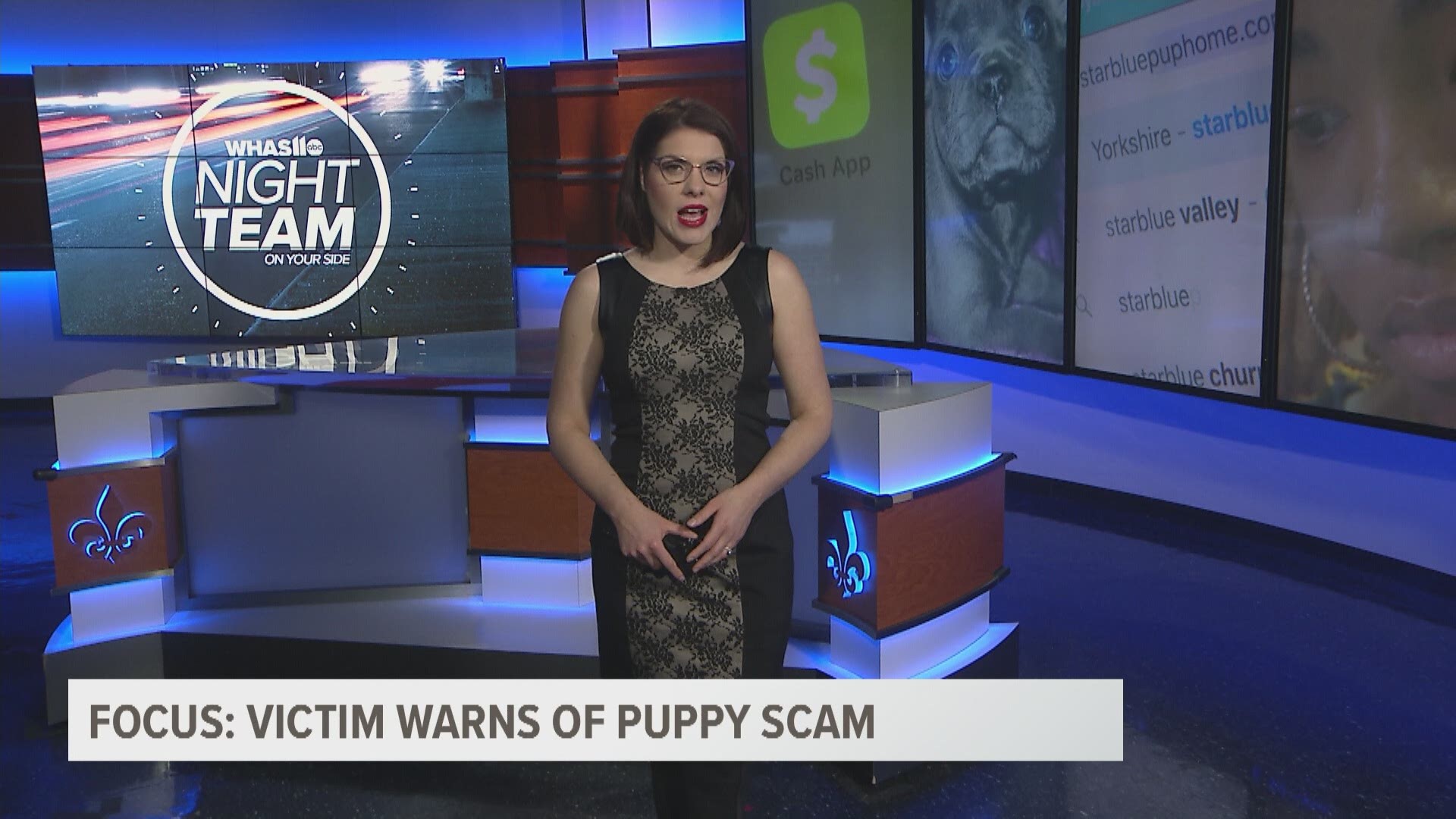 LOUISVILLE, Ky. — It’s a global scam, up 39 percent in the U.S. and Canada over the last few years, according to the Better Business Bureau. And it’s preying on those who think they’re getting a cute, cuddly puppy.

A recent victim, 24-year-old Cierra McLaurin from Louisville, is still shocked by the website that fooled her. She said the website was starbluepuphome.com. In January, she went on the site and found photos of French Bulldogs up for adoption, but she said all she got was a broken heart.

“I just can’t believe that they’re still at it,” McLaurin said.

The dream of owning a French Bulldog is now on hold for the recent Bellarmine University graduate and middle school math teacher. For years, she volunteered at the Animal Care Society, a shelter in Louisville, where she imagined one day adopting a dog of her own. She’s always had a soft spot for one breed in particular.

“I’ve been wanting a French Bulldog for like the longest,” she said.

McLaurin filled out an application on the website to adopt a French Bulldog named Jerry.

“I thought that it was perfect,” said McLaurin. “And it was a cute little French Bulldog with blue eyes.”

She was sent videos and photos of Jerry, and even spoke with someone who claimed to be a representative on the phone. She used the mobile payment service Cash App to send over a total of $1,600 to get Jerry the healthcare he needed and then on a flight from Oklahoma to Louisville.

When she got to Louisville International Airport, there was no Jerry. “And that’s how I knew that it was a scam,” she told WHAS11’s Paula Vasan.

RELATED: 'Tis the season for love, taxes and scammers who never take time off

“I’m outraged and angry about it,” said Bruce Gadansky with Louisville’s BBB.

The problem, he said, is driven by the fact law enforcement often can’t catch the culprits. Scammers are creating more elaborate websites, using mobile services to get paid without leaving a trace. Gadansky estimates about 300 pet scams occur annually in Kentucky alone, but the number is likely much higher since many people don’t report.

“For every one complaint or scam you see there are 10 that don’t get reported,” he said.

“A lot of scammers are making fake websites,” says Louisville Metro Police Department Sergeant Brent Willen. “They are copying pictures from other sites and using them to make their site look legitimate. It’s buyer beware because it’s very hard, nearly impossible, to track these scammers due to them using prepaid cell phones, spoofed phone numbers, and the fake websites.”

Gadansky said the majority of puppy scams trace back to the African country of Cameroon. “They’ve kind of established themselves as the ground zero of puppy scams," he said.

We tried getting in touch with those behind starbluepuphome.com. No one picked up, or replied to our emails.

“It was all a lie,” McLaurin said.

She tells us she’s speaking with WHAS11 to help others. “So hopefully somebody out there will learn from what I did.”

HOW TO AVOID PUPPY SCAMS

If you do find yourself in this situation, help others by reporting your story to BBB Scam Tracker.

More from the FOCUS team: