'You either die or you get buried in bills': Patients sued for payment of medical debt

The FOCUS team investigates a new wave of debt driven by the healthcare system. 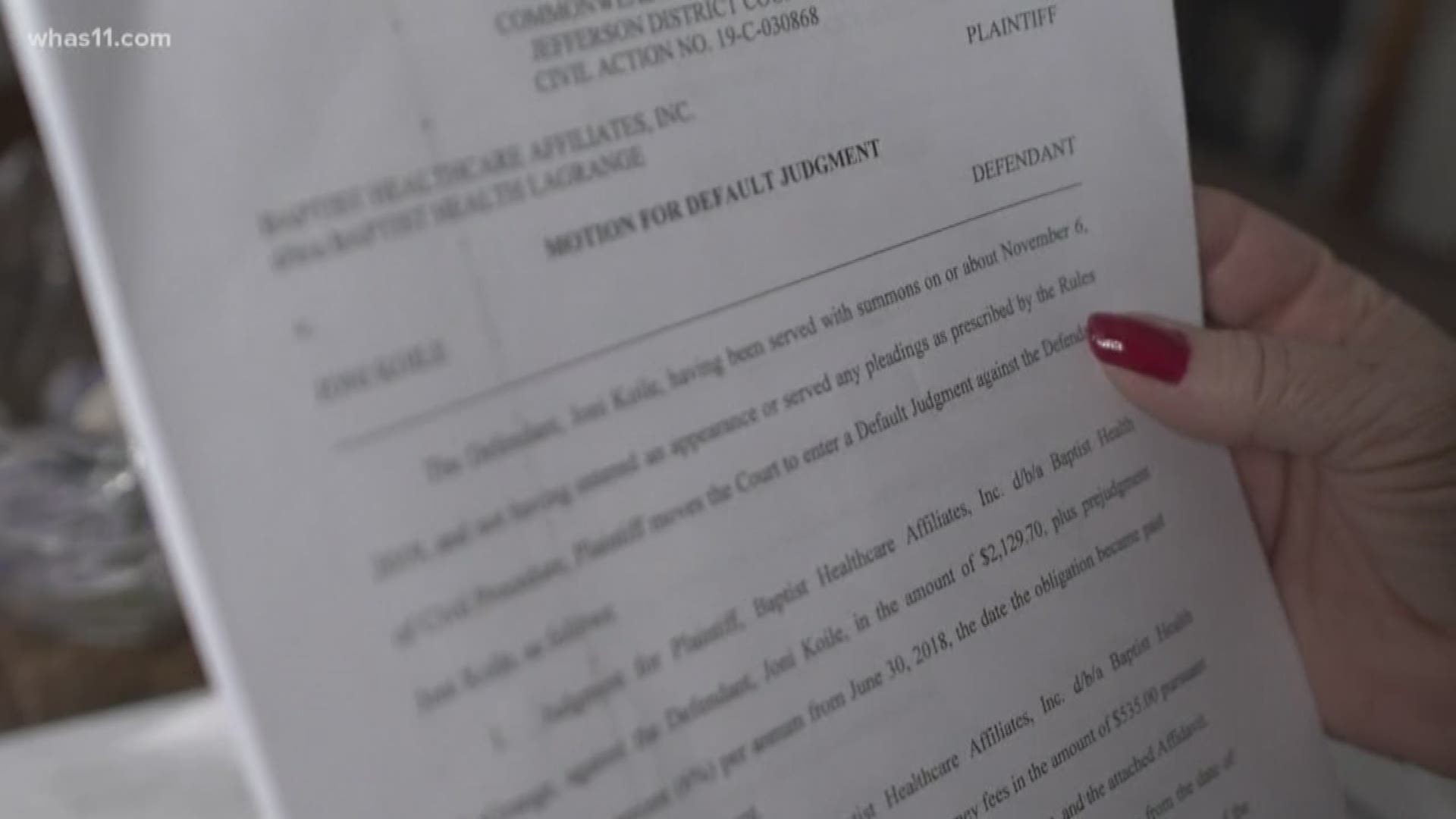 LOUISVILLE, Ky. — Joni Koile, 58, gets into her Toyota Hybrid and heads to the Baptist Health Cancer Center for another dose of reality. It’s her Monday routine twice a month. After surviving colon cancer, a brain tumor and dealing with Crohn’s Disease, her blood needs a boost because she’s anemic.

She can’t live without her iron infusion treatments from Baptist Health Cancer Center and remains a patient despite their lawsuit against her.

“I have to get [treatments] because I'll die if I don't,” Koile says.

Jefferson County District Court issued a default judgement. Personal Injury Attorney Brian Katz of Paducah oversaw collecting the amount of $2,129.70. Katz is linked to many of Baptist Health’s lawsuits. The FOCUS team reached out to him for comment but did not receive a response.

“I was going to retire in about three or four years, but then I had to use my 401K to try to get my bills under control until I could get back on my feet. So, I had to start all over again," Koile says. Her medical bills continued to pile up.

After 20 years working at Snyder, the company cut her well-paying job. Now, she works more hours for a lot less pay in order to cover what is owed after insurance.

Paying is just a Band-Aid on her medical debt. According to Koile, she put her debt on a credit card to “get them to leave me alone.”

Baptist Health system provided the FOCUS team with its seven-step billing process. They included statement reminders as well as a reminder after 90-days financial assistance is available, but the patient is responsible for calling before the bill goes to collections.

According to Baptist Health, they work for months to resolve patients' medical bills. Then an outside agency works to collect the debt for another 120 days before it is turned over for legal action, which is only pursued when the "account balance is over $1,000, the person is not eligible for financial assistance and [their] income meets a certain minimum level."

Norton Healthcare bills more than $2.5 billion annually and writes off $80 million on average.

Plans with high deductibles and larger copays are growing. According to Gough, very few patients of Norton Healthcare are uninsured. He said it is more about those patients who are underinsured. He encourages people to talk to their health system, saying "a lot of them will negotiate with you."

"For patients that come in that don't have any insurance, before we send them a bill, we automatically discount it 80 percent. So, their only get a bill for 20 percent of what the full charge was," Gough says.

Norton Healthcare also offers a program called Clear Balance through Republic Bank. Patients can sign up for a payment program for up to five years, depending on the balance, at zero percent interest.

According to Gough, they only sue patients for payment “as a last resort” and do everything they can to keep patients from reaching that point.

“In only about one percent of the cases do we ever end up and sue,” Gough says.

Jefferson County court records show Norton Healthcare has two active cases, and the FOCUS team couldn't find any, past or present, for UofL Health, which now includes Kentucky One.

Of course, having no bill would be better for many facing medical debt. One nonprofit is making that possible for thousands of people.

The nonprofit is in the business of buying debt and putting it to rest. Antico says it is possible because of generous donations.

According to Antico, Appalachia, which stretches through Eastern Kentucky, has mountains of medical debt.

“You guys are one of the worst for having medical debt on your credit report,” Antico says.

That's life for people like Joni Koile. It is a burden she will bear for the rest of her life.

For clarification: the legal names of the healthcare systems are Baptist Health, Norton Healthcare and UofL Health.

However, it has come to our attention that there are variations of those names. Therefore using Jefferson County Courts online search engine, many more active civil cases by the healthcare systems against patients were discovered.

For Norton Healthcare, more than 1600 cases.

And for UofL Health, 4 cases.