'No more goalpost-moving': McConnell calls out JCPS board's reluctance to return to class 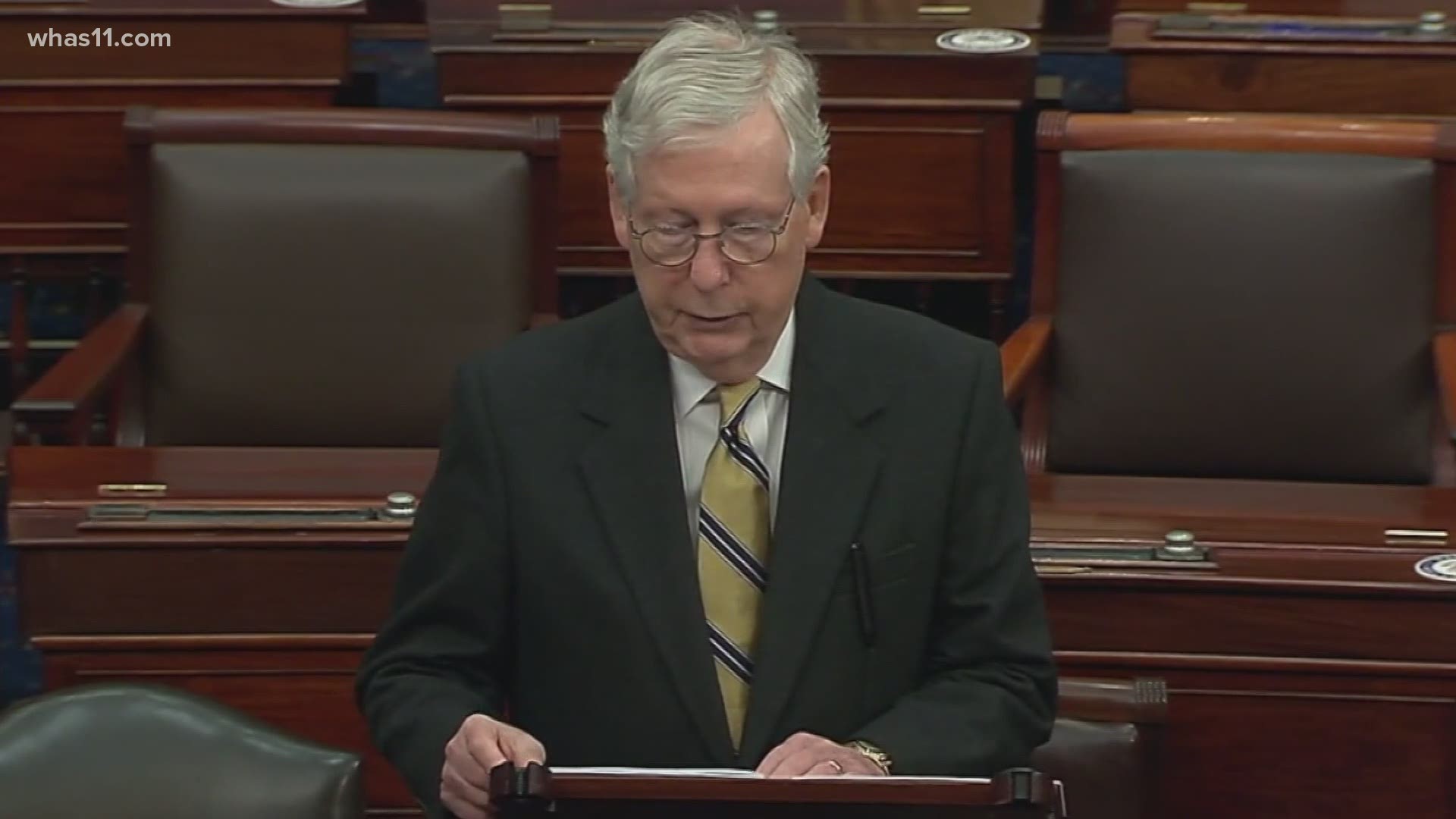 LOUISVILLE, Ky. — Minority Leader Mitch McConnell questioned the Jefferson County Board of Education's reluctance to return to in-person classes during his remarks on the Senate floor Wednesday morning.

In his push to reopen schools, McConnell called remote learning "a poor substitute for the real thing," saying unions are putting the best interests of children last.

"In my hometown of Louisville, Kentucky, the largest school district in the state has a union-funded Board of Education Vice-Chair," McConnell said. "He’s now saying that even if all school personnel get vaccines, he’d still be reluctant to open schools."

This comes after a Tuesday board meeting where Chris Kolb, the JCPS Board of Education Vice-Chair, suggested vaccines may not be enough to combat COVID-19 if both teachers and students are back in the building.

Kolb, the board member identified by McConnell, called him a "disgrace" bought by health insurers, drug companies and "the corporate elite."

"If you got off your ass and did your job we could defeat COVID," Kolb tweeted. "You're a disgrace and you're lucky you didn't have to face Booker."

Louisville is not your hometown. That's in Alabama. You're bought by drug companies, health insurers, predatory hedge funds, and the corporate elite. If you got off your ass and did your job we could defeat COVID. You're a disgrace and you're lucky you didn't have to face Booker. https://t.co/s9uE78n1NJ

WHAS11 talked to Kolb today who said his responsibility is to keep people safe and healthy. Something he feels McConnell has not done.

"Trust me I want nothing more than to have my child out of my house for seven or more hours a day," Kolb said. "He was trying to deflect attention, away from his inaction, from his failure and lay it at the feet of a local board of education which is just beyond ridiculous."

"We are on track to become the fastest state to vaccinate our teachers," Beshear said.

Beshear said he understands there's an expectation to get classrooms open in some form, but he explains according to the CDC, you can only do so safely with density control, masking, proper ventilation and community mitigation.

"We will always need, through the end of this year, a virtual option for students whose parents choose it," Beshear said.

But people like Kolb are also worried about forcing employees back into school buildings who don't want to go.

As the pressure to reopen schools mounts, President Joe Biden's administration is pushing for a COVID-19 relief package that would distribute billions of dollars to offset necessary expenses for K-12 and colleges reopen safely. McConnell argued there is still unused money set aside for K-12 schools, though the amount is significantly lower than Biden's proposal.

"The president’s chief of staff keeps saying we need even more massive federal funding before teachers can go back. There’s no scientific basis for that," McConnell said.

While CDC said there is little evidence of the virus spreading when proper precautions are being taken, many teachers nationwide have stated they would not return without a vaccine. Some educators, like those in Kentucky, have had the chance to receive the vaccine.

"The goalpost-moving doesn’t stop with money," McConnell said. "In several places, these unions sought to elbow toward the front of the line for vaccinations — only to turn around and say, thanks for those vaccines, but don’t think these will necessarily get our folks back in the classroom anytime soon."

In a meeting Tuesday night, JCPS Superintendent Marty Pollio said he will suggest a return date once the district knows when teachers will receive the second booster shot.

McConnell said states and districts must "follow the science" and return to in-person learning, speaking against Biden's recovery plan.

"Kids, parents, and a lot of talented teachers have given online learning their all," McConnell said. "But we will be deluding ourselves if we continue to accept this pale shadow of proper schooling when all the science points the other way."