Additional witnesses spoke Thursday about the crash that claimed the life of LMPD Det. Deidre Mengedoht. 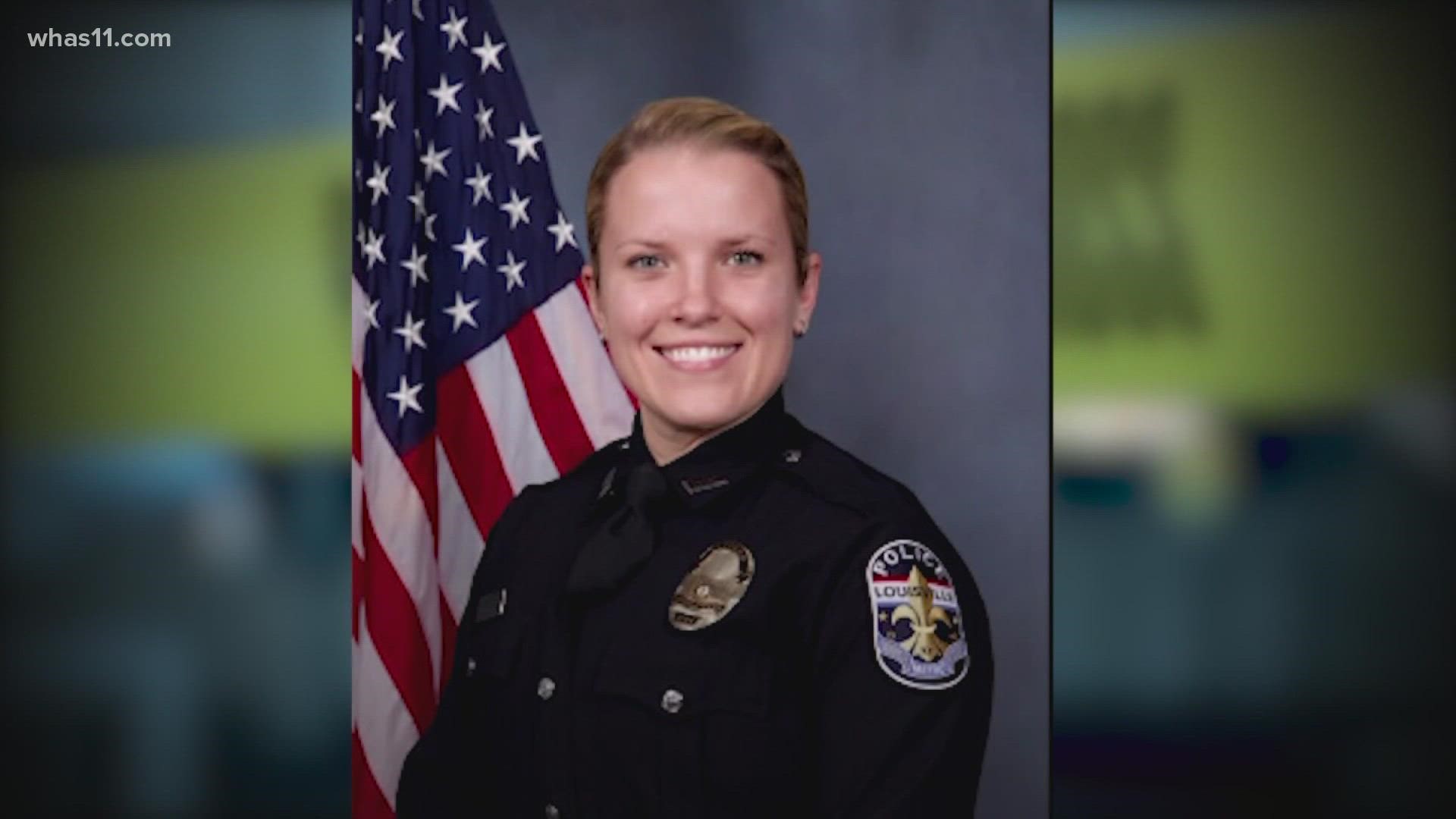 LOUISVILLE, Ky. — The jury trial for Roger Burdette, the man charged with killing Louisville Metro Police (LMPD) Detective Deidre Mengedoht in a crash in 2018, is underway.

Witness testimony continued into the fourth day of the trial on Friday, Oct. 29.

Questioning on Friday morning focused on CDL licensing guidelines, including restrictions in place for those operating with a license.

Burdette uses a hearing aid, so he would have a V license restriction, according to the Federal Motor Carrier Safety Administration.

"From February of 2017 to February 2019 was the search that was done, it came back with negative results showing that he did not have prescription for either of those," PIU Sgt. Omar Lee said.

Lee then testified that they looked through cell phone data as part of the investigation and found text messages where Burdette asked for pills between November 2016 and December 2018.

The PIU investigation also look at cameras near the underpass and Lee testified he counted 29 cars that moved over to avoid Menegedoht's police cruiser and the truck she pulled over on I-64 at the Belvedere.

LMPD's lead traffic investigator broke down the MSD truck's speed and brake analytics from the moment of the collision. They revealed that Roger Burdette's foot was on and off the brake around the point of impact.

Officer Dean Kisling was also at the scene of the crash and says he looked at tire marks that could indicate signs of braking.

"I cannot by those marks definitively say if he was on or off the brakes at the point of impact, what I can say is we did not have," Kisling testified. "Any substantial length of skid marks or braking evident coming into the impact area."

The first witness of the day was a toxicology expert, who told jurors it was his opinion that Burdette was under the influence of hydrocodone and clonazepam at the time of the crash. He added that the clonazepam may have been taken the day before the crash.

Toxicology expert Dr. James Davis was first on the stand this morning explaining the effects hydrocodone and clonazepam might have on a person.

Davis said the effects of the drugs could have dampen down Burdette's ability to steer the truck. Additionally, he said that the levels found in his system would be classified as under the influence.

But during the defense's cross examination, Davis refused to say whether or not the hydrocodone and clonazepam found in his system directly caused the accident.

"That's for the jury to decide," Davis said.

During Tuesday's testimony, the prosecution presented medical documents showing Burdette had taken hydrocodone Dec. 24, 2018, the day of the deadly wreck.

Dr. Davis testified the clonazepam was probably not taken that day.

"Because there's only 7 amino colazapam and not colazapm, I can say with medical certainty the drug was taken a day or so before; and not since then.," Davis said.

Jurors also heard from FBI Agent Blake Downing, who analyzed Burdette's phone activity around the time of the crash, based on towers it pinged to.

Downing testified Burdette's phone activity is shown to have been playing a pornographic video during the time of the wreck.

A detective with Kentucky State Police and digital forensics expert, who asked not to be named, showed the jury the analytics  Burdette’s phone. The data shows that Burdette unlocked his phone at 2:11 p.m., and milliseconds later, opened the Safari app on his phone, going to the website, xvideos.com.

The detective testified that Burdette accessed a video from that site from 2:12 p.m. through 2:20 p.m. when he closed the app.

"[I]t was a pornographic video,” the detective told the court.

Later on, the Commonwealth called Bill Malcolm, a Director with MSD to the stand. Malcolm testified about fueling records with the truck that Burdette was driving, and could tell the jury if the MSD tanker was moving, and about how fast it was going during certain times.

According to the data, Malcolm said Burdette's truck was in motion each time he accessed the website on his phone. At one point, the truck was going as fast as 70 mph.

Malcolm testified that the GPS and ignition status showed the truck was in motion, going about 40 mph at 2:15 p.m. and was at a complete stop by 2:17 p.m.

The trial resumed Wednesday morning with additional witness testimony. The first witness to speak was Quentin Brady, who had been pulled over by LMPD Det. Deidre Mengedoht on I-64 just before the deadly crash.

"When she pulled me over… I saw the semi coming and next thing I know, we were shoved forward," he said.

Brady and the other passengers in his car - his girlfriend, sister and daughter - saw Burdette's truck crash into Mengedoht's cruiser and catch on fire.

Jasmine Parks, Brady's girlfriend, said she saw the smoke, but did not see the crash.

Brady was in the car with his girlfriend, her sister and his daughter. This picture shows them running from the wreck on I-64 at the Belvedere. He says he couldn’t get to Officer Mengedoht’s car because of the flames @WHAS11 pic.twitter.com/hWOmyugyU2

Jeffrey Scott, another witness to the crash, said he pulled over to try and help.

"It brings back bad memories, he had stated, he had his hands over his head and I said, 'what's going on…' he goes there's a body in the car, a police officer, so I tried to save them," he told the jury, talking about Mengedoht. “I really wanted to try and save them."

Scott's wife, Angela, was recording the scene one her just a few feet away. Video footage shown to the jurors was the bumper of the MSD truck damaged and smoke smothering the underpass.

"He was pacing, hands on head, sweaty," Angela Scott said. "I felt like he was under the influence."

"Stepped off the line, did not turn like he was instructed and used arms for balance," Johnson recalled.

Sgt Johnson confirmed to jurors there was no alcohol found in Burdette's system. The LMDC registered nurse who took Burdette's blood did testify that the defendant did quote "sometimes" take hydrocodone.

Toxicology reports had indicated that hydrocodone, which is an opioid, was in Burdette's system at the time of the crash.

According to his arrest report, Burdette admitted to officers that he had taken multiple prescription drugs on the scene of the crash. The defense argues his innocence - he told jurors he has trouble hearing.

Roger Burdette, a former Metropolitan Sewer District (MSD) driver, crashed his truck into LMPD Detective Deidre Mengedoht's cruiser while she was conducting a traffic stop on I-64 on Christmas Eve in 2018. Mengedoht was killed in the crash.

After the crash, Burdette failed a field sobriety test and admitted to officers that he had taken multiple prescription drugs on the scene of the crash, according to his arrest report.

Additional court documents released earlier this year say Burdette was watching pornographic videos on his phone around the time of the crash.

Burdette was charged with murder, four counts of wanton endangerment, driving under the influence of drugs or alcohol and failing to give the right of way to a stopped emergency vehicle.

Burdette's trial was supposed to begin over the summer but was delayed due to the availability of a necessary witness.

The trial began Monday, Oct. 27, 2021. On Tuesday, after the prosecutor and defense questioned potential jurors, the court settled on the final 14 jurors: nine women and five men.