Lawsuit filed in pepper spray incident at the Hall of Justice

“I do believe it was extreme excessive force,” Kejohn Jennings said. 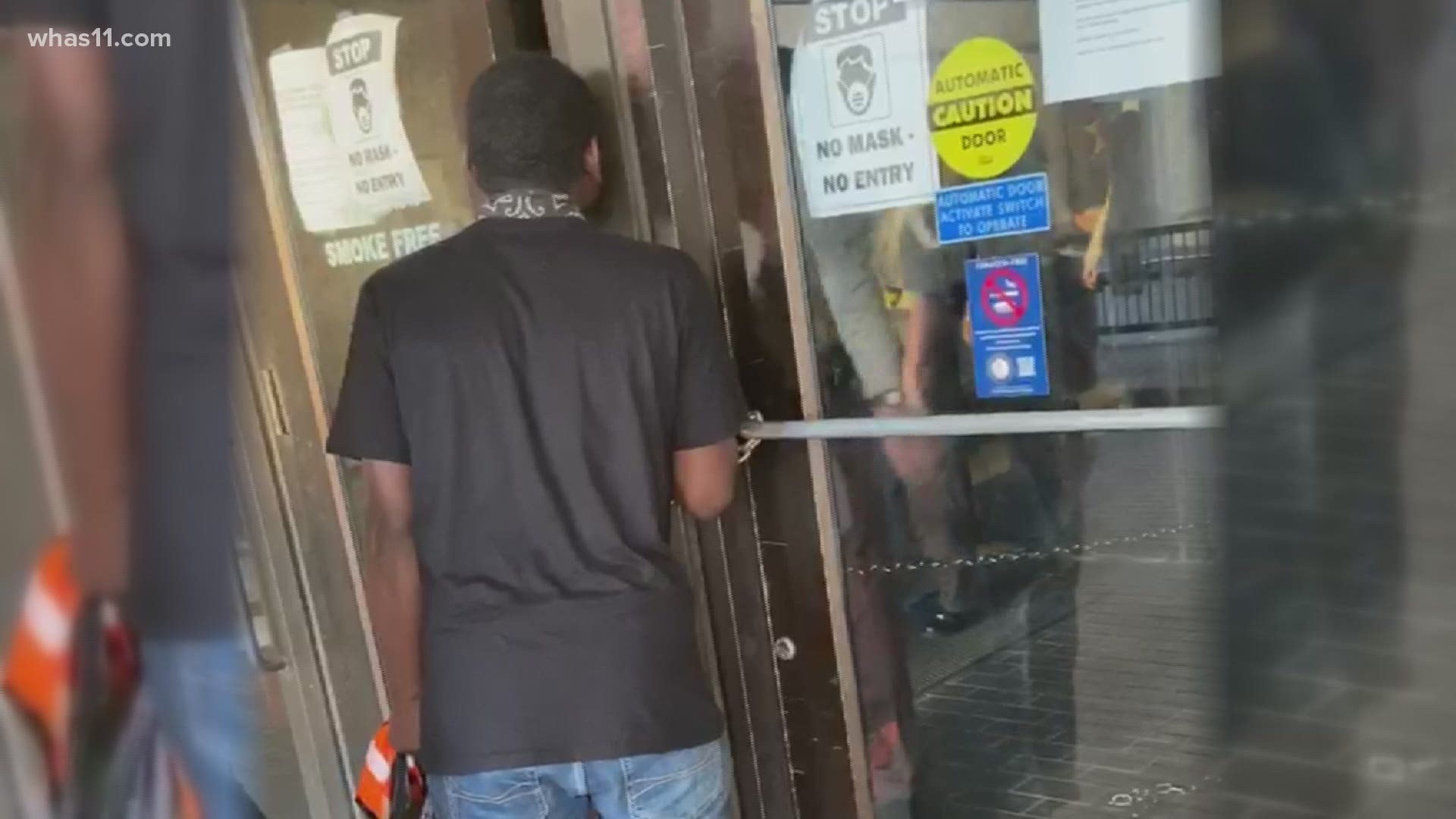 A Louisville man is suing the Jefferson County Sheriff’s Office after a deputy was caught on camera pepper spraying him through the courthouse doors on July 10.

Video taken on a cell phone showed Kejohn Jennings, 22, asking to use the bathroom at the Hall of Justice.

After a minute or so, the video shows a deputy approaching the doors from inside the courthouse on 6th and Jefferson, and deploying a cloud of powdered spray, believed to be pepper spray through the doors, hitting Jennings in the face.

“I do believe it was extreme excessive force,” Jennings told WHAS11. “My face just burning, feeling swollen, pain in my abdomen, pain in my stomach, I couldn't even really feel my hands.”

The doors to the courthouse are usually open to the public 24/7, but since the protests started, the Sheriff’s Department have used chains and handcuffs to keep them shut.

“No deputies were giving any type of information, they were giving us no type of commands either,” Jennings said.

“It's an executive order by the Supreme Court of Kentucky that this courthouse is supposed to be *explicative* open,” he told deputies inside.

At one point, Jennings can be heard cursing at one of the deputies.

His attorney David Mour filed a lawsuit against the Sheriff's Office and the deputy behind the glass, George Grissom.

“I don't care what he said to the deputy. The reaction was unlawful, miles and miles over the stop, aggressive, brutal, uncalled for,” Mour said.

In the complaint, Grissom is accused of having a history of discipline as a law enforcement officer.

“Through open records I determined twice in the last few years there were incidents involving this particular deputy,” he explained. “One of the incidents was an inappropriate post on Facebook. I don't have the post. They're supposed to be getting that to me. The other time was an accidental discharge of a weapon,” he said.

The Jefferson County Sheriff’s Office confirmed they've launched an internal investigation and cannot comment, but did release a statement on July 13 that said deputies have a duty to protect the courthouse: “We will not give these buildings up to anyone attempting to gain entry by force or aggression.”

“I think it's very clear even in the video my hands hadn't even touched the door, in fact the only person that put hands on that physical door and tried to pull it any type of way was a Sheriff's deputy,” said Jennings, who wants to see criminal charges against him.

According to a spokesperson from Jefferson County Sheriff's Office, “pepper spray is an option of less lethal force for use instead of ‘hands-on’ force when verbal commands are not complied with. It should be used in short bursts to the area of the face.”

The Use of Force policy states reasoning for using less lethal force depends on:

RELATED: Hunger strikers for Breonna Taylor on 11th day, say no halt until officers are fired