'We don't feel let down, we are let down': Andrea Knabel's family worried new leads in missing case might go cold

The Knabel family has a renewed sense of hope after new eyes looked at the case, but they still fear their leads might go cold. 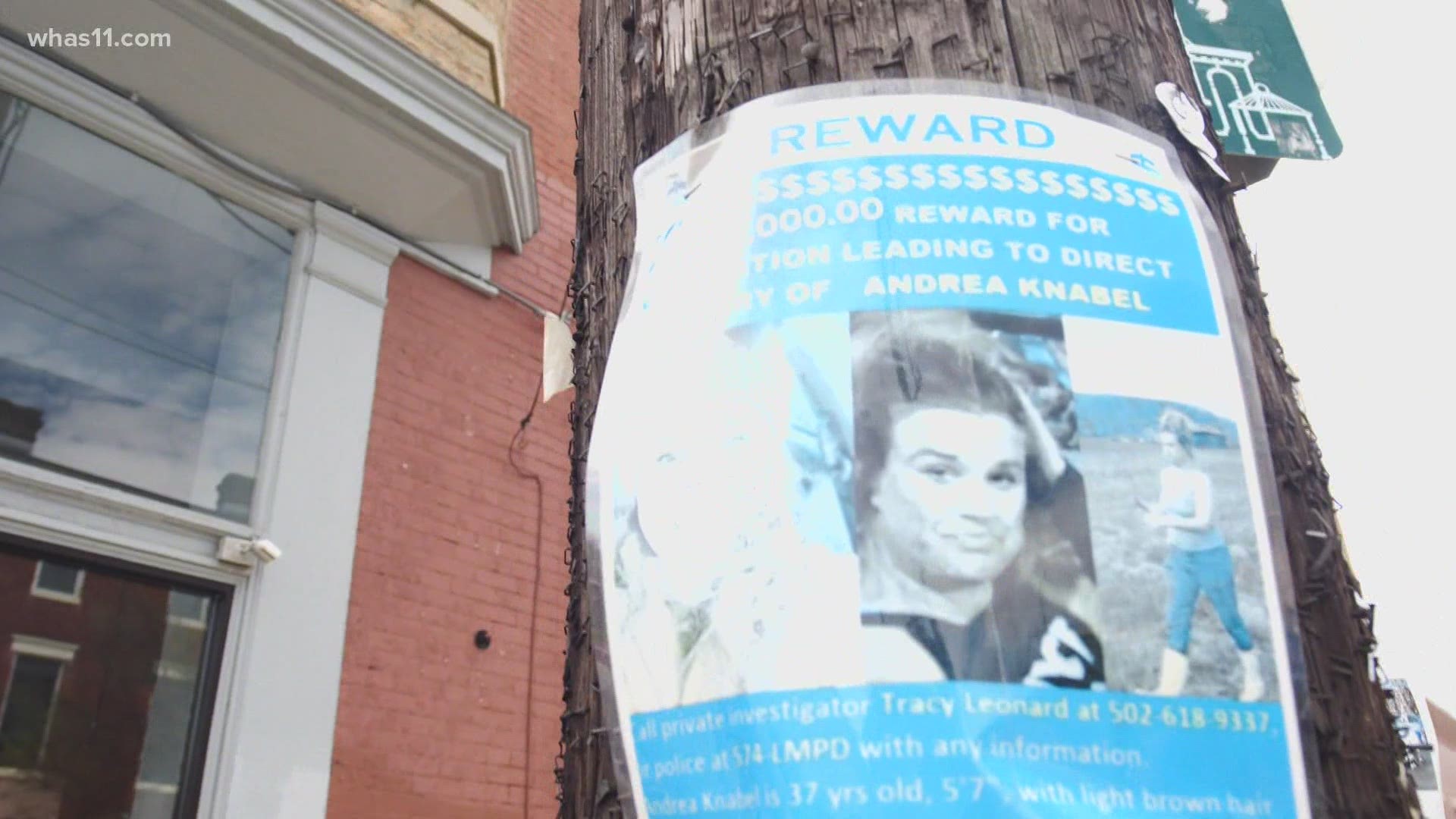 LOUISVILLE, Ky. — Flyers stapled to telephone poles across the city beg for the public's help in finding Andrea Knabel, a mother of two missing since August 2019.

For over a year, Mike Knabel has spent every moment he could searching for his daughter. Now, a new set of eyes has discovered a discrepancy in the timeline the night she was last seen alive.

The UNSOLVED team first covered Andrea Knabel's story in 2020. In a terrible twist of fate, the member of 'Missing in America' — a group dedicated to searching for missing people — became the focus of searches.

Knabel had been staying at her mother's home when her family said they had some sort of argument. She eventually left for the hospital, where she had some sort of infection on her face, and returned home before heading to her sister's place.

Family members told WHAS11 in November that she was last seen at her sister Erin's home. Though evidence shows she made it back to her mother's home that night, she was never seen again.

Investigators have struggled to narrow the field of possibilities and find answers in Knabel's case, leaving her family to their own devices.

Knabel's father, Mike, said the Louisville Metro Police Department assured his family that the case is "open and active." Still, he said his attempts to contact the agency tasked with uncovering what happened to his daughter have been unsuccessful.

"Its very, very difficult to keep the Louisville police department focused on this," Mike Knabel said.

Still, new eyes have brought new developments to the case —  and new hope to the Knabel family.

Joe Fanciulli, a retired homicide detective with a law enforcement career spanning 50 years, found Knabel's case through a Facebook group for missing people. He got involved in the family's search in January.

"[I] met Andrea's family and volunteered to help...to go in and look at this as a cold case-go back to the beginning —  redo everything," Fanciulli said.

In the days after Knabel first disappeared, investigators used her computer to create a "Google timeline," tracking her final movements before her cell phone went dark. That's where Fancuilli started.

"When I looked at them they weren't quite complete," Fancuilli said.

Following Knabel's trail, physically walking the route himself, Fancuilli discovered a discrepancy. Investigators originally reported that Knabel was at her mother's home until around 6:30 a.m. Fancuilli said that timeline is not correct.

Though it may seem like a small error, Fancuilli said the difference of three hours is huge —  and now that they're poking around, more people are speaking out with new information.

"We're turning over a lot of rocks and we're poking a lot of hornets nests and it's starting to bring out more information now than I think the family has had in the last year and a half, and that's a good thing," Fancuilli said.

But is it enough?

The Knabel family said they worried that without collaboration from LMPD, the new leads may end up going cold.

"We don't feel let down, we are let down, but I'm not sure who to blame exactly," Mike Knabel said.

Knabel said a lot of key people in the investigation are more than willing to talk about what they know, but no one has spoken to them.

"These are long shots and we fully understand that, but with any investigation you can't neglect something like that, you have to take your longshots, too," Mike Knabel said.

Knabel reached out to LMPD, letting them know that they have information that might help them further the investigation. He said despite the department saying they work on the case regularly, the family has not seen anything.

"I'd at least like some communication, to talk to them about it, but I think they've got their own plan and their own system and maybe the distraught father of a daughter that's been done 19 months isn't part of that," Knabel said.

Despite his disappointment with local law enforcement's efforts, he ended his latest attempt for answers with gratitude.

"My family enthusiastically supports your efforts, and thanks you for what you do for the community," his most recent email to LMPD said. "Signed, Mike Knabel and Family."

There is an anonymous tipline dedicated to getting any new information that might be useful to the case. People are asked to report anything they know that might help at (855) 746-0846.