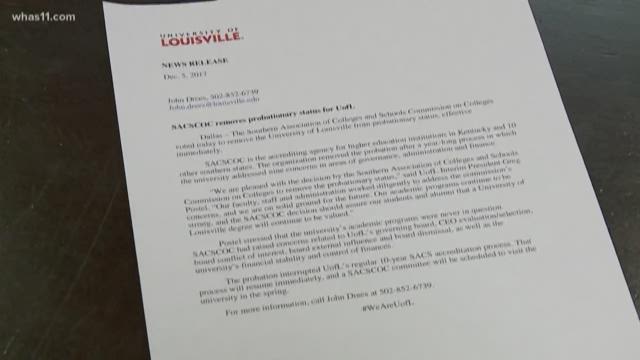 LOUISVILLE, Ky. (WHAS11) – The University of Louisville will keep its accreditation after sufficiently addressing concerns raised by the Southern Association of Colleges and Schools.

The higher education accrediting agency voted Sunday to take U of L off probation but the decision wasn’t announced publicly until Tuesday.

“I think is an attestation of our commitment to an environment where students feel safe, where they feel like they’re going to receive a quality education, and where they don’t have to worry about things like accreditation,” Postel said Tuesday afternoon during a teleconference with local media. “That’s the kind of thing that students should never have to worry about.”

Postel was in Texas for the accrediting association’s annual meeting.

The agency put the university on probation almost one year ago after Gov. Matt Bevin fired the old Board of Trustees and appointed a new one. SACS was concerned about the political influence.

The positive decision is a huge relief for U of L students and faculty. A university must be accredited for students to receive federal financial aid. A loss of accreditation can also devalue academic degrees.

The probationary period interrupted the university’s regular 10-year accreditation process. Administrators said that process would resume immediately, with the accrediting agency expected to visit U of L in the spring.