Holcomb told lawmakers in his State of the State speech he wants to tap into the state's cash reserves to make an early payment into a state teacher pension fund.

INDIANAPOLIS — Indiana’s governor has outlined to state legislators how to free up tens of millions of dollars toward boosting teacher pay but he doesn’t want them to act on it until next year.

Republican Gov. Eric Holcomb told lawmakers in Tuesday night's State of the State speech that he wanted to tap into the state’s $2.3 billion in cash reserves in the 2021 legislative session to make a $250 million early payment into a state teacher pension fund.

"I am recommending that in the next budget the General Assembly use an additional $250 million from our surplus and put it toward teacher retirement funds. In turn, $50 million a year will be generated to redirect to teacher pay," he said.

Holcomb and Republican legislative leaders have resisted calls from teachers unions and Democrats for immediate action to improve the state’s lagging teacher pay.

Holcomb says the new payment will free up $50 million in annual state funding.

In his speech, Holcomb also reiterated his support for a statewide ban on drivers using hand-held cellphones.

He also called out the rise in e-cigarette use by Indiana kids.

"In addition to raising the age to 21, we'll also seek to increase the penalties for retailers who sell tobacco and vaping products to underage buyers," he said.

Another proposal he touched on was the push for Indiana to join 27 other states requiring employers to provide reasonable accommodations for pregnant workers.

"Our strong economy didn't just happen. We earned it," he said.

Read the governor's full remarks below: 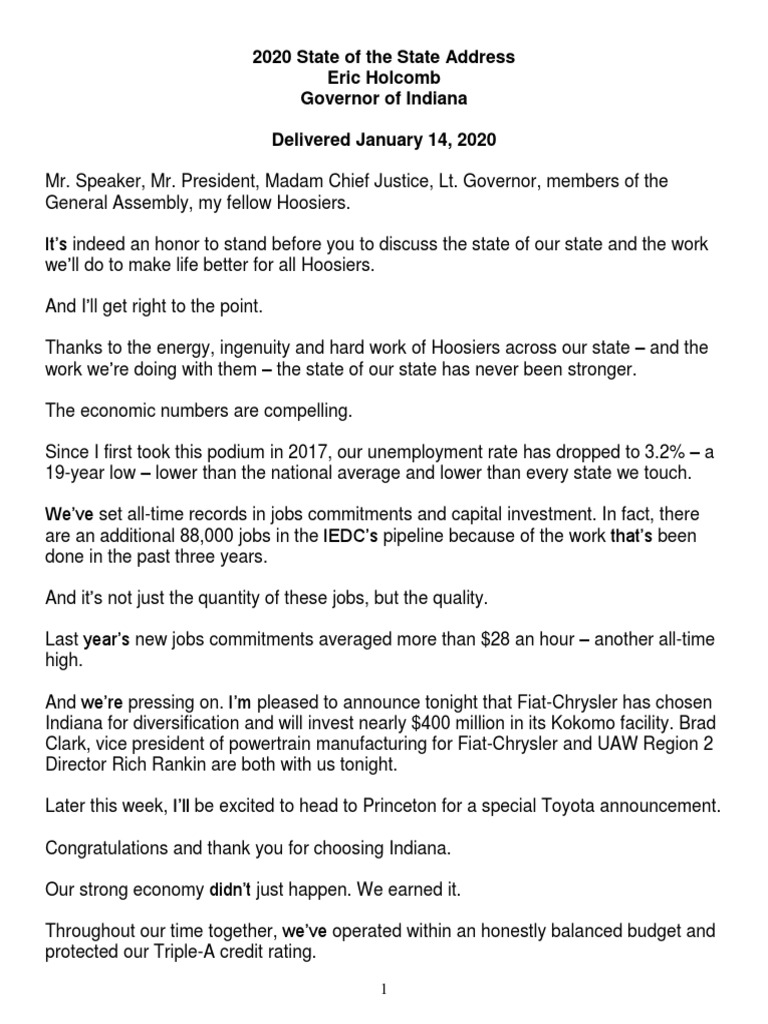 2020 State of the State Remarks | Teachers | Employment
Eric Holcomb Governor of Indiana Mr. Speaker, Mr. President, Madam Chief Justice, Lt. Governor, members of theGeneral Assembly, my fellow Hoosiers. It's indeed an honor to stand before you to discuss the state of our state and the workwe'll do to make life better for all Hoosiers.