Double amputee: 'Safety, it's in your hands'

After losing both of his arms in a workplace accident, a local welder is making sure that no one else makes the same mistakes. 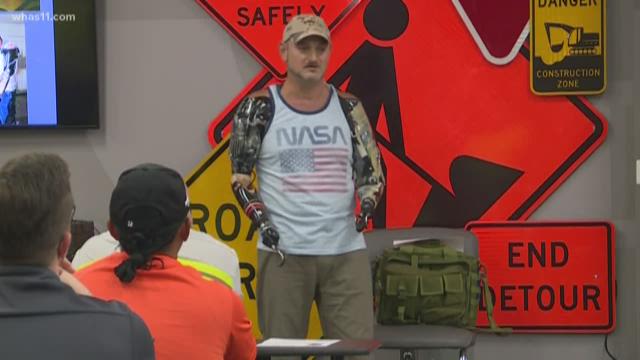 LOUISVILLE, Ky. (WHAS11) — A local welder who lost both of his hands in a workplace accident is reigniting the conversation of safety on the job.

Billy Parker now speaks to local businesses about his story hoping his loss will be the last.

"Safety, it's in your hands. It really is," Parker said, while addressing a crowded room of employees at Louisville Paving and Construction.

RELATED | Jessica Cox is proof you don't need arms to reach for the stars.

As he holds up two prosthetic arms in front of them, his message is heard loud and clear.

"I knew it wasn't the right thing to do," Parker said, thinking back to the day it happened.

It was the spring of 2007. Parker was a welder at a Jeffersontown manufacturer when he was asked to help clean out a drywall shredder while it was still running.

"I walked over to the machine and saw another gentleman doing the same thing they were asking me to do. So, I picked up my screwdriver and went and did it. I wasn't there for 10 seconds and just said, this is way too...and before I got 'dangerous' out of my mouth, that's when I got caught and pulled in," Parker said.

He lost both of his arms above the elbow and a 20-year career.

He's one of the lucky ones. The most recent data from the Occupational Safety and Health Administration reveals 5,190 people died on the job in 2016, a 7 percent increase from the year before. Millions more were injured.

"I feel like if I can somehow put a dent in that, it's my obligation to do it," Parker said.

New safety programs were put in place at the shop after his accident but it would take several years before Parker found his new purpose.

"You know, you have to look out for each other," he told the audience, during a safety training session.

RELATED | Dog with two legs an inspiration for local amputees

He's spent the last two years speaking with local businesses about safety, a powerful visual of what can happen when it's ignored.

"It shook me," James Bentley, with Louisville Paving and Construction said.

"He's living proof that something tragic can happen to you and it can affect him, his company, his family and kids. The works," Bentley said.

It's a reminder to anyone facing dangers on the job, to put safety first.

"I just don't want someone else to have to go through that, I was very fortunate to be here. I'm lucky to be alive," Parker said.

Parker meets with other amputees each month who gather at the Moving Forward, Limb Loss Support Group. Learn more on their website.