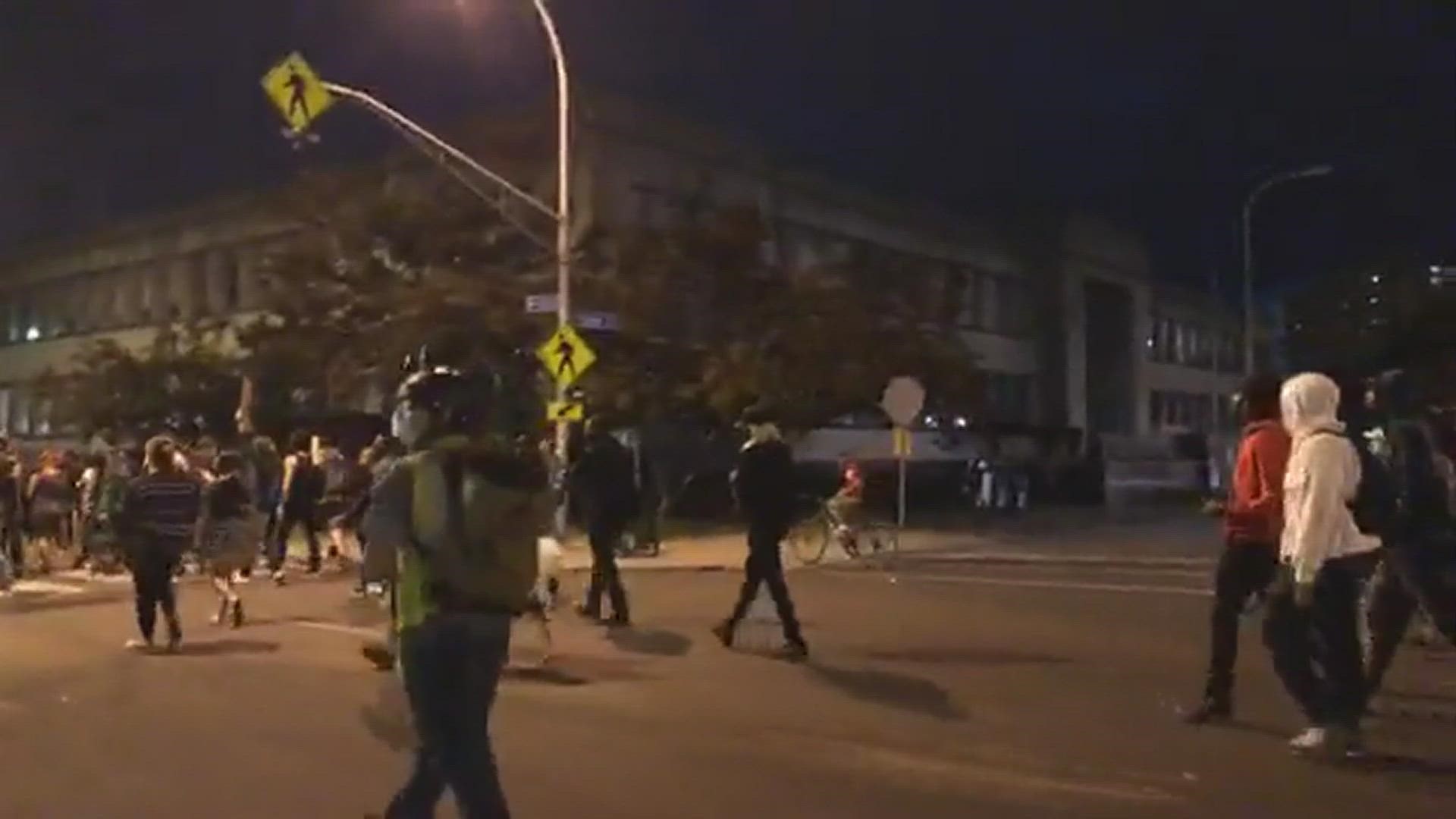 LOUISVILLE, Ky. — Editor's note: This blog contains details of what happened Friday, September 25 in Louisville, Ky. two days after a Jefferson County Grand Jury announced its decision in the case of Breonna Taylor. All times listed are in Eastern Time.

Protesters filled the streets following the announcement. More than 150 people have been arrested in the past two days, Louisville police said. Two officers were shot Wednesday night, both are expected to be okay.

12:29 a.m. LMPD said they made 22 arrests Friday related to protest activity. They plan to release more details on Saturday.

10 p.m. Despite curfew, protesters remained outside First Unitarian Church. Police were seen approaching the group, however backed out of the area. Crews saw golf balls being thrown from a nearby apartment at protesters outside the church.

8 p.m. Protesters began returning to First Unitarian Church on 4th and York, a place that offered sanctuary for protesters Thursday night. The church has told WHAS11 it is open and offering sanctuary again Friday.

6 p.m. Social justice group Until Freedom began a march starting at Jefferson Square Park in honor of Breonna Taylor. The march, which did feature members of Taylor's family went into the NuLu neighborhood, where police stopped them.

LMPD said an unlawful assembly was declared after protesters did not move to the sidewalks. WHAS11 crews witnessed two rounds of flashbangs as the crowd was told to disperse. Two people were arrested.

4 p.m. The University of Louisville men's basketball team led a march in honor of Breonna Taylor at Cardinal Stadium, saying they were working towards positive change in the city.

Louisville native and sophomore David Johnson said the team will continue to honor Taylor and demand justice in her case. Grad transfer Charles Minlend said the march is a step in the right direction, knowing they will still have to work towards change.

"The reality is, she shouldn't have died that night," Minlend said. "The reality is it's really scary, it's very terrifying being Black living in America."

Senior Malik Williams also spoke ahead of the march, announcing the Cards will host a voter registration drive at Shawnee Park next Saturday.

1 p.m. Daniel Cameron's office responded to Taylor's family and attorneys, saying he understood the outcome of the grand jury decision "was not what they had hoped."

"Regarding today’s statements at the press conference, everyone is entitled to their opinion, but prosecutors and Grand Jury members are bound by the facts and by the law," Cameron's office said in a statement. "Attorney General Cameron is committed to doing everything he can to ensure the integrity of the prosecution before him and continue fulfilling his ethical obligations both as a prosecutor and as a partner in the ongoing federal investigation."

10:30 a.m. The family of Breonna Taylor and their attorneys spoke to media at Jefferson Square Park Friday morning, calling on Daniel Cameron to release his office's findings in the investigation.

“If you want us to accept the results, release the transcripts," said civil rights attorney Ben Crump. "So, we can have transparency."

Taylor's mother, through a message spoken by her sister, said she never had faith in Daniel Cameron. The family's attorneys said they were not convinced Cameron's investigation was thorough or fair.