'It’s not going to happen to us – and it did.' | Parents turn to Louisville organization to help combat drug problem among teens

Michael Davis says he created The Last Chance or TLC K-9 as a way for worried parents to see what their children are up to behind closed doors. 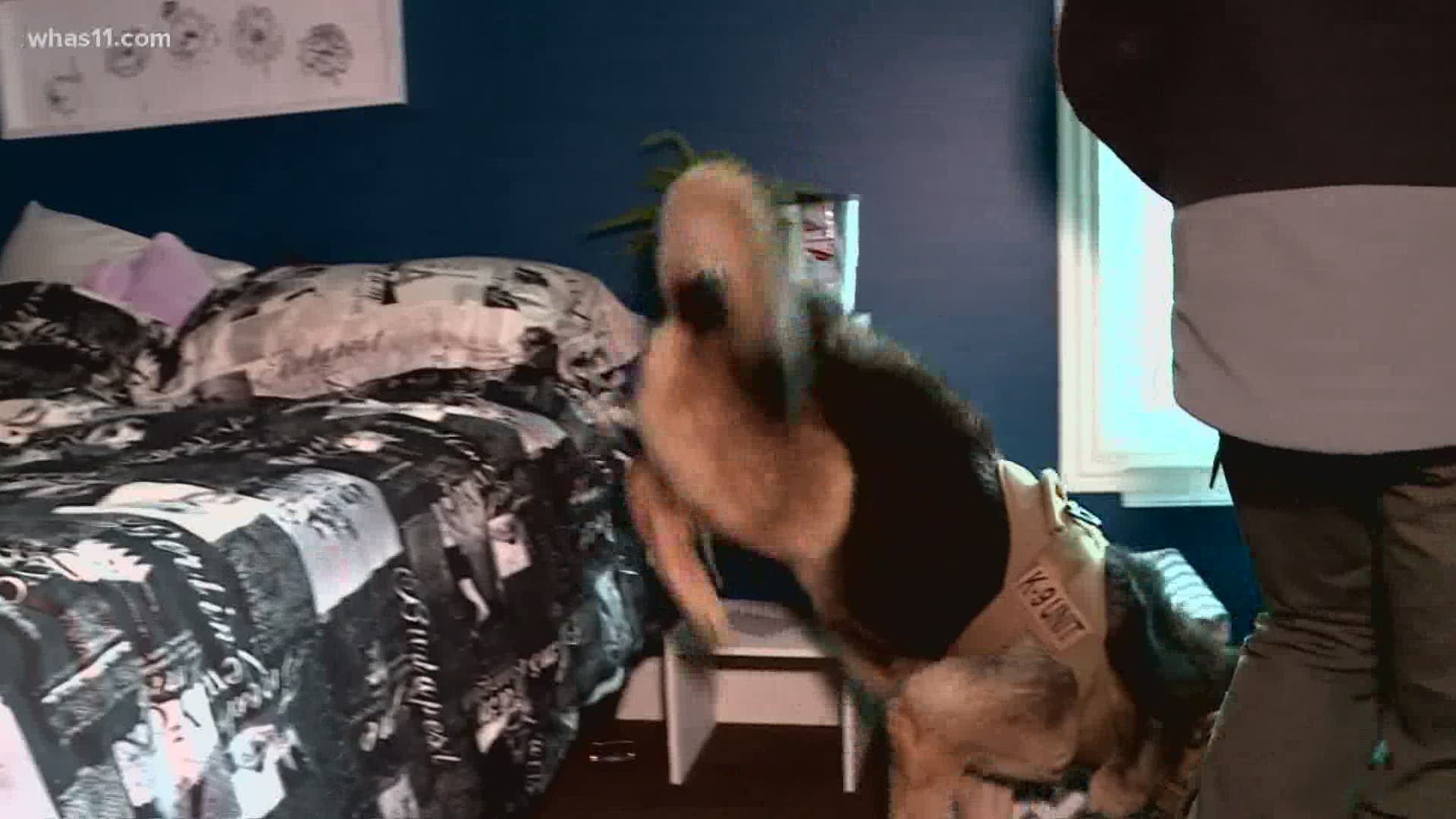 LOUISVILLE, Ky. — Oakley is a curious K-9 that has a way of sniffing out secrets.

She checks high and low and has done it for years alongside her handler Michael Davis.

Together, they make up part of The Last Chance or TLC K-9 Services and the Worried Parent Program.

Davis and his dogs dig for drugs in what’s called a “sniff” through the home.

“A lot of parents want us to just indulge the sniff in the bedroom, but we always want to sniff the rest of the home, as well as vehicles, the perimeter of the home, because children tend to hide things away from their bedroom,” Davis said.

“It was on a “sniff” they met Steve and Allison Luckett.

“It’s not going to happen to us – and it did,” Steve recalled.

The couple had noticed their teenage son was sleeping a lot more and talking with him had become more difficult.

“He got very contentious a lot, especially towards his mom. You could tell he was starting to act out,” Steve said.

A call placed to TLC K-9 revealed the disheartening discovery.

“What really struck me was when he brought the box down and he opened it up.” Steve said.

Allison added, “It was way more dangerous than what we thought it was.”

A variety of drugs found in his bedroom and hidden in various parts of the house.

“There was remnants of stuff outside, there was stuff in a flower pot – in a cooler,” Allison recalled. “It’s scary.”

Since the first “sniff” in 2015, Davis and other handlers have gone inside more than 900 homes, finding heroin, fentanyl, spice, syringes, ecstasy, pain pills and other drugs.

He said the worst amount of drugs ever found inside a child’s home was 6 ounce of marijuana – more than 150 grams of weed.

“This was a child that was dabbling in selling,” Davis said.

He pointed to even more problems during the pandemic.

Credit: WHAS-TV
Oakley the K-9 and Michael Davis check a room for drugs.

In a study by the National institute on Drug Abuse, 11,800 students from 112 schools across the country were surveyed.

Results showed that daily vaping of nicotine and marijuana had slightly decreased among 10th and 12th graders from 2019 to 2020.

“We're going to have more teenagers struggling in school, dropping out of school, not completing school,” Henry Lucas said.

“By the time I was 14, I was full-blown addicted to drugs and alcohol,” he said. “I was using methamphetamines, ecstasy, marijuana daily. That progressed and progressed until I found myself using prescription drugs.”

Sober for more than 12 years now, Lucas recently opened his own business – Louisville Health and Healing.

He and his staff work with families to try and keep kids away from the path he took at such a young age.

“Being explorative and being curious about ourselves is a part of our growth as people, but depending on the environment this is happening in, it can be detrimental,” he explained.

Lucas said conversations about drug abuse between kids and parents are critical but seem too scarce.

“Families are not quite sure what to do or how to handle the situation,” he said.

That's why after every sniff, Davis sits down with a family and explains the next steps.

“We have to remind them that these are children and that children make mistakes,” he said.

The mistakes he hopes to keep his own son from making.

“I am a father myself of a 7-year-old boy and I created this program to help his future.”

The Lucketts said they have seen a change in their son since the “sniff” more than a year ago.

“Being able to have a resource of someone who really knows what they're doing brings us some confidence that we can take this on,” Steve said.

They know it's an alarming trend, not exclusive to their household, or even their neighborhood.

“The drug epidemic hits every single side of town,” Davis said.

They believe law enforcement and organizations within the community need to work together to combat the crisis collectively.

“Lots of families are going through it and we could all use some help,” Allison said.

If Davis and his dogs do discover drugs in a home, they tell parents how to dispose of them - the company can't remove the drugs themselves.

They keep the house calls anonymous.