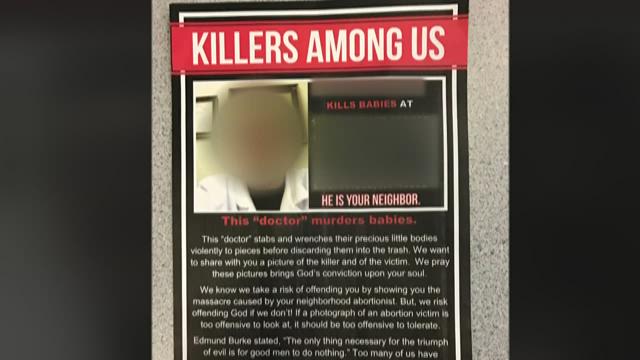 LOUISVILLE, Ky. (WHAS11) – An anti-abortion group has distributed fliers in Louisville targeting doctors and other employees of Kentucky’s only abortion provider.

The mailers contain pictures of the EMW Women’s Surgical Center’s doctors and director, Anne Ahola, as well as their home addresses.

Several concerned homeowners who received the fliers told WHAS11 News they were afraid the fliers were inflammatory and could incite violence.

The mailers were distributed by Operation Save America, a Texas-based anti-abortion group that is in Louisville this week for daily protests.

The front of the fliers say, “KILLERS AMONG US,” in large, bold-faced print. “This ‘doctor’ murders babies,” reads another mailer. “We want to share with you a picture of the killer and of the victim. We pray these pictures bring God’s conviction upon your soul.”

“This is Anna. She works at the office of the abortion mill,” Sellersburg pastor Joseph Spurgeon said Tuesday as he held up a flier bearing the clinic director’s picture. “She claims to be a Christian and yet she helps murder children.”

Spurgeon said “people need to know” that “people like this” live among them, adding that the fliers encouraged homeowners to love and “be good neighbors” to the individuals named in the mailers.

Ahola said on Tuesday that she was “not surprised” that the fliers were distributed.

“We have to learn in this world to live outside out of fear and I choose to do that,” Ahola said. “It’s disturbing to me that other people are going to be disturbed by it. It’s not right to push these kinds of thoughts in anybody’s mailbox and make people feel uncomfortable.”

Ahola believes the group could face backlash for the fliers and some members’ “obnoxious” behavior. She also challenged the group’s condemning religious rhetoric.

“These people don’t have a monopoly on God. I am a Christian. I am strong in my faith and I believe I am doing the right thing,” Ahola said. “An abortion is not on anybody’s bucket list but the women who are looking for that, I’m glad to be part of that service.”