The admitted white supremacist responsible for the massacre of nine people inside a Charleston church has plead guilty to state charges against him. 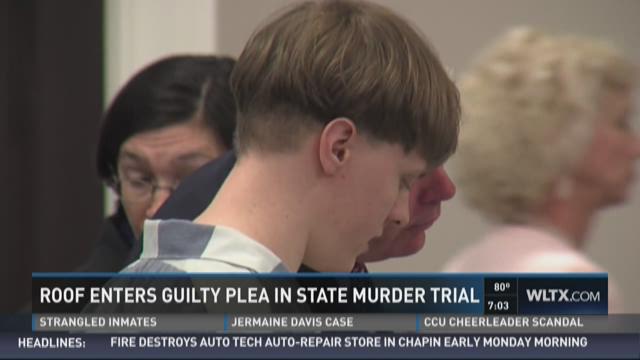 Charleston, SC (WLTX) - The admitted white supremacist responsible for the massacre of nine people inside a Charleston church has gotten nine life sentences on state charges that were filed against him.

Dylann Roof, clad in a black and white striped prison jumpsuit and in shackles, appeared in court Monday afternoon, where he entered guilty please to murder and attempted murder charges. In exchange, he received the life sentences, which come without the possibility of parole.

Roof answered a series of questions from the judge, with a series of short one or two word replies, before the judge handed down the sentence.

Family members and friends of the victims were given an opportunity to address the court.

"I wanted to say to Dylan Roof (that) I'm the one that forgave you at the bond hearing and I still do today. And also that you came here to start a battle, but I win the war. I wore white today to let everybody know the chapter in my life right now today is closed. I will not open that book again," Nadine Collier said.

Collier is the daughter of the late Ethel Lance, one of the nine victims.

"The system which I've worked in almost 60 years now and believe in seems to have worked as it should have worked to my unprofessional in this area experiences. I just want to say loudly and repeatedly and constantly, we're sorry. We're just as sorry as we can be that this has happened. We regret it. It's ruined lives and I cannot put those back together," he said.

The action was largely a formality, since Roof had already been sentenced to death at the beginning of the year following his conviction in federal court on murder and other related charges. By taking this option, the state avoids another lengthy trial for a verdict where the outcome was virtually certain, and will begin the process of transferring him to federal custody so he can begin serving time in confinement in a U.S. prison facility.

He'll most likely serve that time in a federal penitentiary in Terre Haute, Indiana.

After the hearing Solicitor Scarlett Wilson and other friends and family members of the victims addressed the media.

Malcolm Graham was asked if he had forgiven Roof for killing his sister Cynthia.

"Forgiveness is a process. If my sister was walking across the street. If she was hit by a distracted driver and that driver said, 'Oh God. Please forgive me. I didn't mean to do this. I didn't wake up in the morning with the intent of killing anyone,' forgiveness can come. This was calculated. This was premeditated, so I do not. I hope that God can give me the strength to one day come to that point, but no. Justice needs to be served. It was rendered in the federal courts. It was rendered here today and God have mercy on his soul," Graham said.

During last December's trial, prosecutors showed videos and journals that proved that Roof killed his victims because they were black. The recording and writings showed a man with a deep hatred of African-Americans and other minorities, and who spoke of starting a race war.

Roof had planned and prepared for the mass shooting by doing things like buying a gun, having target practice in his backyard, researching and studying racist websites and driving to the church several times in the months leading up to the shooting.

He then carried out the attack on June 17, 2015. The victims that night were all at Mother Emanuel AME Church for a Bible study. Roof sat with them for about an hour, then pulled out his gun and started firing. Three people survived the rampage.

Roof is expected to be transferred to a federal prison within the next few weeks.