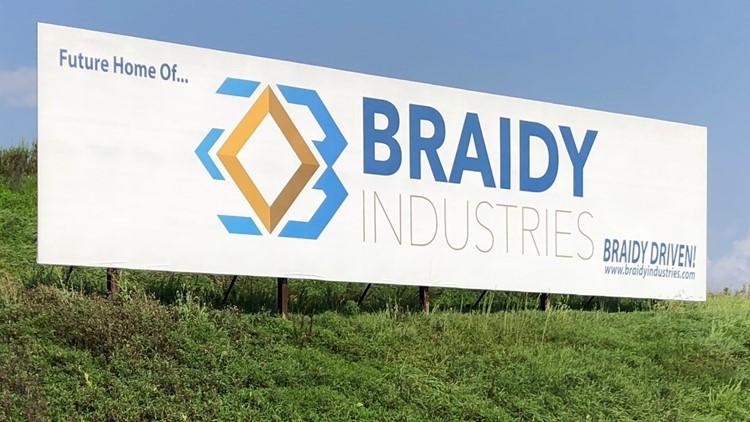 Photo by: AP
File-This Aug. 22, 2018, file photo shows a sign declaring the future home of Braidy Industries' aluminum mill in Ashland, Ky. An aluminum company planning to build a $1.7 billion plant in Appalachia is forming a partnership with a Russian company that until recently faced U.S. sanctions. Russian aluminum giant Rusal wants to invest $200 million in an aluminum rolling mill that Braidy Industries intends to build near Ashland, Kentucky. Rusal says it would assume a 40 percent ownership share in the mill in return for the investment. Braidy Industries would hold the other 60 percent share. (AP Photo/Adam Beam, File)

“In releasing these documents, we are showing Kentuckians that we are committed to transparency and open government,” Gov. Beshear stated in a news release.

Braidy industries CEO and Chairman Craig Bouchard release this statement about the documents being made public: “Braidy Industries believes in transparency as well as in the privacy of its shareholders. The state asked for the release of these documents and we were happy to support this request. The Commonwealth Seed Fund is a valued shareholder. Braidy strongly supports the governor, the bi-partisan leadership of the state of Kentucky, and all of its agencies.”

WHAS11 Focus Investigation team was able to identify at least seven investors connected to Braidy Industries. The records we checked didn't show that the investors listed below made any donations to former Kentucky Gov. Matt Bevin.

Investor and number of shares they own:

According to the Attorney General's Office, Commonwealth Seed Capital, LLC, (3 million shares), was contracted by the state to manage the $15 million investment account. Kentucky is the largest stakeholder and Craig Bouchard is the second.

The documents which includes the names of those who invested in Braidy Industries also include:

A letter of intent regarding Kentucky’s $15 million investment

Here are some other things to know about the documents:

Kentuckians can learn about the structure of governance of Braidy Industries by reading the voting agreement. The investors’ rights agreement contains the rights of the initial investors to inspect the company, cause stock to be issued and purchase future sales of stock.

The documents include minimal redactions of personal addresses in accordance with state open records laws and the circuit court’s order. The previous administration refused to release the documents requested by The Courier-Journal despite an attorney general’s open records decision and multiple court rulings* holding that they are public records, Beshear's office said.

In December 2018, Gov. Beshear released the 2017 proposed pension reform analysis. The analysis commissioned and withheld for years by the former administration shows those proposed reforms costing the state retirement systems more and negatively affecting the retirements of educators and public employees, compared to the existing, bipartisan reforms made in 2013, according to Beshear's administration.