While snow accumulation is still expected, a prolonged period of sleet would cut into final totals. 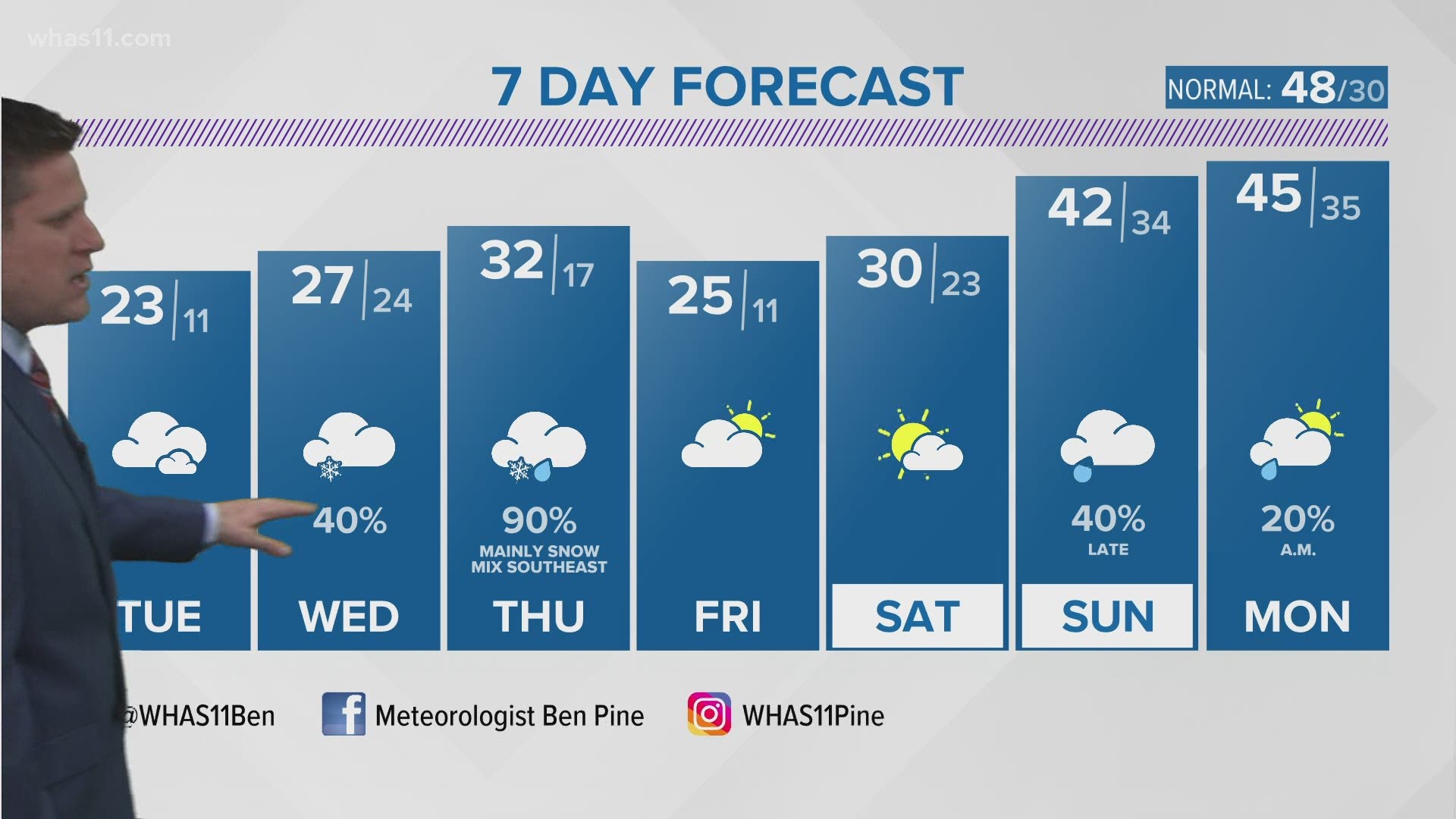 LOUISVILLE, Ky. — A major winter storm bringing several inches of snow is still in the forecast for Monday. Another winter storm late next week may bring more snow and ice.

Weather setup: Two waves of snow will arrive Monday bringing several inches of snow to the Ohio Valley. Round #1 began falling overnight and has continued into this morning. Early reports across the area indicated anywhere from 1-2" of snowfall.

Drive slowly! Ice is still on many side roads, so snow on top of it will make those side streets especially slick.

Credit: WHAS
End of snow is in sight around 11 PM

RELATED: Where to find salt, shovels, and sleds ahead of winter storm in Kentuckiana

The second wave of began early Monday afternoon. This will be the main course after the earlier appetizer. Snow will become heavier as the afternoon progresses and has reduced visibility across the region. Travel Monday evening and night is not encouraged. The second round is also expected to dump most of the snow compared to the first wave earlier in the day.

A couple big questions that still exists are where will the heaviest snow fall and what will the predominant precipitation type be? Sleet has proven to be a significant problem Monday afternoon, despite radar indicating snow as the main precipitation type. There are several trends on radar that are concerning, such as potential dry air south in the Tennessee Valley punching northward.

0.13" of liquid water is equivalent to 0.3" of sleet. That's a 2.4:1 ratio, meaning 2.4" of sleet is equivalent to about 1 inch of water. Sleet has a higher water content than snow, so this is why prolonged sleet events can dramatically reduce how much snow ultimately falls.

How much snow? As of Monday afternoon, the First Alert Storm Team is forecasting widespread totals of 4-8" by Tuesday morning. Metro Louisville will likely be on the lower end of that range. You're more likely to see higher snow the further north and west you live from Louisville.  Locally higher will still be possible largely depending on sleet duration. Far less snow will fall south of the WK and Bluegrass Parkways because of sleet and ice. Lots of sleet was being reported around the area early Monday afternoon.

RELATED: LIST | Where to find popular sledding locations in the Louisville area

Long Term: Snow will end overnight Monday leaving pretty much everybody with some shoveling to do. Temperatures will be very cold Monday night, down into the teens with wind chills in the single digits or even below zero in Indiana. Highs Tuesday only in the low/middle 20s,with wind chills still in the low teens or single digits.

Credit: WHAS
Snow will have exited well before daybreak Tuesday, but it'll be very cold.

Tuesday afternoon and Wednesday will be an intermission before the next big act arrives for Thursday. There is far more uncertainty with this storm. Snow is again likely, but so is sleet and ice. As of Monday afternoon, snow is expected to return Wednesday afternoon. After another intermission or two, the main event will arrive Thursday. Currently, this system looks to be predominantly snow but depending on track, much like our current storm, we may also end up with a significant sleet and ice event.

We'll have a better idea of what's to come Thursday starting Tuesday.