The heat is on: how hot common outdoor surfaces can get in the summer sun

Sidewalks, parking lots, and your car can easily top 100 degrees. 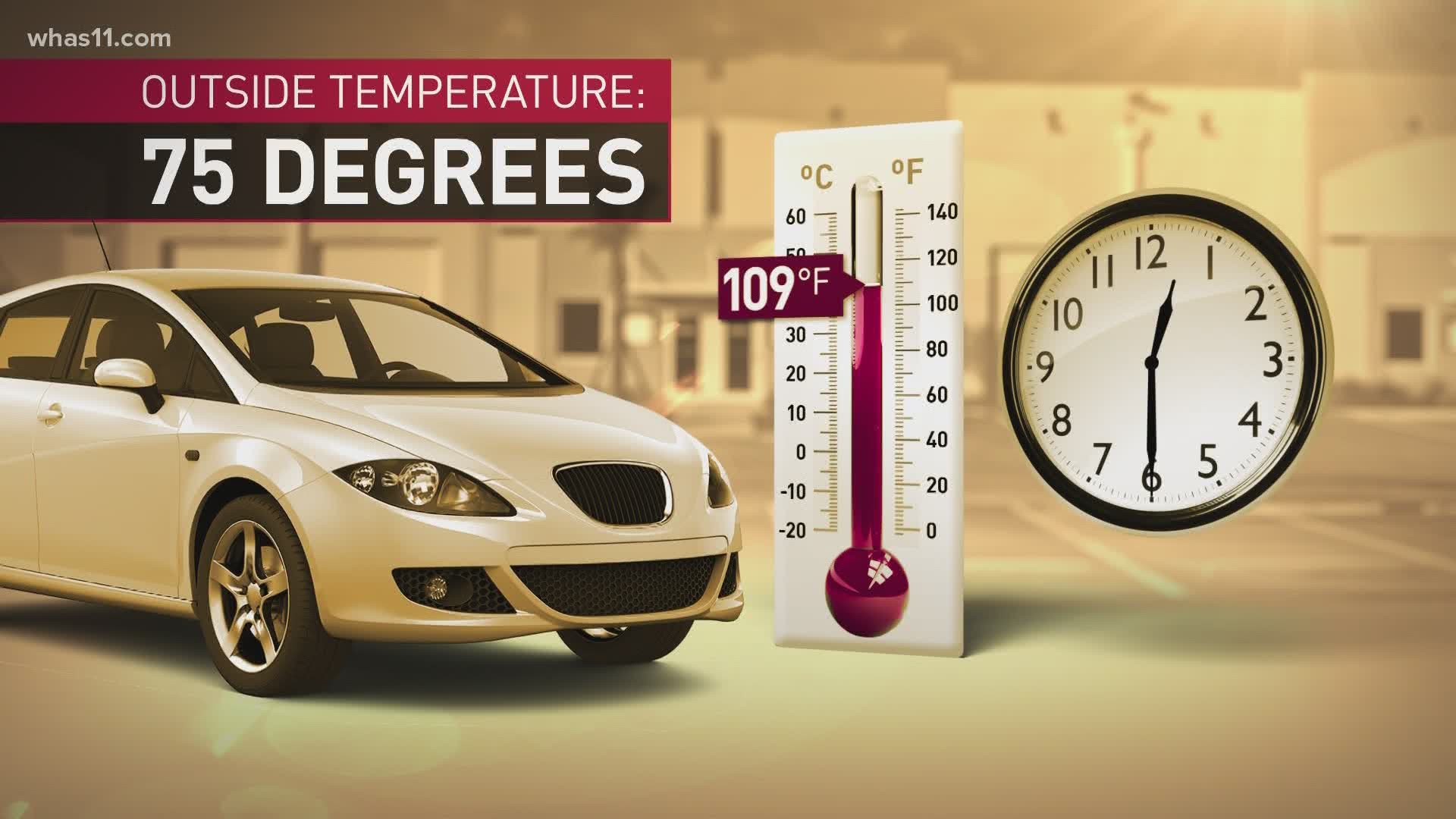 LOUISVILLE, Ky. — The summer heat is on. Meteorologists frequently discuss the dangers of excessive heat exposure during summer. While air temperature can be hot, physical surfaces can be even hotter. The material of that surface, however, plays a large role.

Using an infrared thermometer, I went outside to see how hot things can get in the Kentucky July sun. The following photos were taken during the 2 PM hour on July 5, 2020 with an air temperature of roughly 91°F-92°F. When possible the temperature of an object was taken in the shade and then in the direct sunlight. There’s a big difference between the two! The big number displayed in the photos is the temperature at the specific spot the laser was directed, but underneath it is a smaller number that represents the average over a scanned distance.

We’ll first go through the pictures, then dive into the science behind why some objects are hotter than others and other important heat information.

Temperature of objects in high heat

First, we’ll investigate grass. Grass generally does not warm too extreme of temperatures but can still get fairly warm. In the shade of a tree, we found grass had an average temperature of about 78°F. That is much cooler than grass that’s been sitting in the sun for most of the day which clocked an average temperature of roughly 95°F. While this is warm, it’s not likely to burn your feet if you were standing on it barefoot.

Credit: WHAS
Temperature of grass in shade versus direct sunlight.

Materials such as concrete and asphalt have a much higher capacity for heat meaning they can warm to higher temperatures and release that heat more slowly – more on that later. I first took the temperature of concrete that is totally shaded and never receives direct sunlight. It recorded an average temperature just under 80°F, a couple degrees warmer than shaded grass. However, concrete that had been sitting in the sun almost all day was 55° warmer at 135°! That is very warm.

Credit: WHAS
Temperature of concrete in shade versus direct sunlight.

After the concrete I went and found some asphalt. Asphalt, depending on its age, is black so it absorbs the most energy of any color and should be the warmest substance found. The asphalt I measured had an average temperature of 145°. The concrete curb right next to it, which had been sitting in the sun for the same amount of time, was just over 20 degrees cooler with an average temperature 123°. This is evidence of how the composition and color of a material can make a huge difference in how warm it gets! Standing in the middle of a freshly paved asphalt parking lot you would feel a lot hotter compared to standing in an old concrete parking lot.

Finally, I took to the furnace that was my car to see how hot it was. The dashboard of my car is black, so the temperature inside should be exceptionally higher than cars with a lighter interior. Car interiors can reach dangerously high temperatures, and after only a few minutes my forehead was already covered in sweat. It should be noted that while my car was sitting in the sun all day, it was not taking direct sunlight through the middle of the windshield, but rather through one side of it. While the interior was hot, it likely was not as hot as it could have been had it been facing directly into the sun.

Why are some things outside hotter than others?

An object’s material plays a very large role in how warm it gets, in addition to how much solar radiation it receives. As mentioned earlier, concrete and asphalt are good examples of this. In metropolitan areas where trees and other green space is sparse the abundant concrete and asphalt gobbles up solar radiation and warms to high temperatures (this is known as having a high heat capacity). It also emits some of that heat back into the atmosphere and raises the air temperature higher than suburban or rural areas. They’re a bit greedy with this heat and are very slow to release it, which is why metro areas like Louisville are often several degrees warmer at night than surrounding communities and never cool off as much.

RELATED: What is a Sun Dog? | Weather Wise

It’s also not fun for your pets. There’s a simple trick to determine if the ground may be too hot for your dog to walk on; if you can’t place the back of your hand (not your palm) against the sidewalk (or other surface) for at least 5 seconds, then it’s too hot for fido and their pads could get severely burned. Walk them in the grass if you can, wait until later in the day when it’s cooler, or try and put on those little boots for dogs (good luck).

Cars are some of the most dangerous places to be in high heat with no air conditioning, and unfortunately each year several people – often children – die in hot cars. 2018, unfortunately, was the deadliest year on record for children dying in cars with 53 deaths. The interior of a car can reach temperatures exceeding 140 degrees after 60 minutes with an external air temperature of 95 degrees. Much like wintertime driving, it’s not a bad idea to have a kit in your car in the event of a breakdown in extreme heat. An ample supply of water to keep you hydrated is important!

Have fun in the summer sun, but stay hydrated and don’t overexert yourself!