Accumulations will be minor, but there may be slick spots on roads. 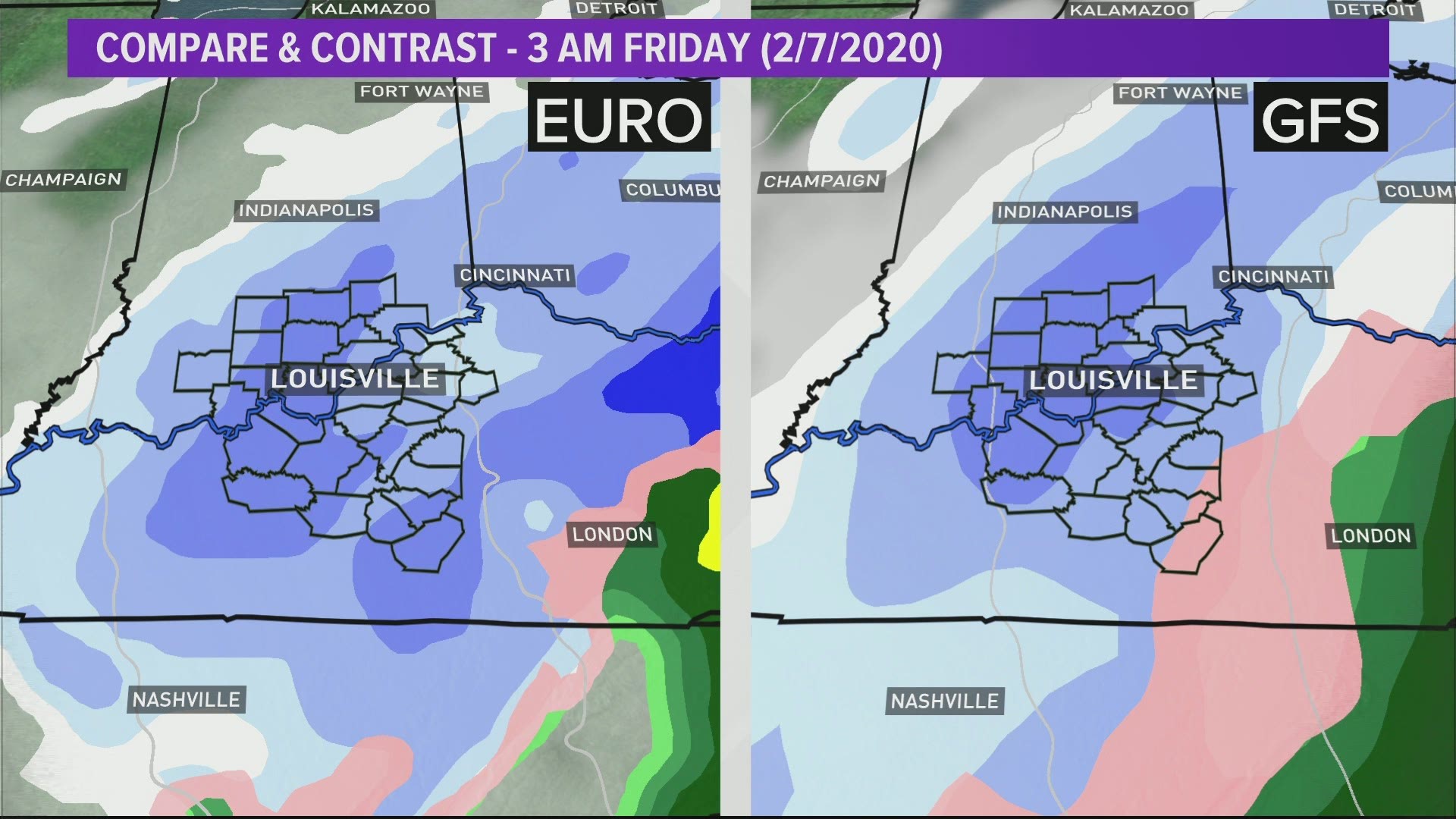 Active weather across the country is causing significant headaches. Portions of the southeast United States have saw damaging and deadly tornadoes before noon eastern time. Thankfully, we will not have anything in the way of severe weather, but instead we’ll have some winter precipitation on our hands.

Weather setup: An area of low pressure was in southeast Kentucky, with a secondary low to the south of it and the source of a lot of problems for the southeast. Kentuckiana has been underneath a thick deck of clouds with persistent drizzle and a northwest wind. These factors combine to make for a wet, dreary, raw day.

Scattered patchy drizzle will be Thursday’s theme as temperatures are unlikely to reach 40 degrees. The heaviest core of rain should remain well to our south and east today. However, as the center of the storm (located to our south), moves northeast, colder air will wrap around on the backside of it, as well as some moisture. This is our setup for light snow across Kentuckiana late Thursday night into early Friday morning. Some patchy fog might also be possible. High temperatures Friday afternoon will be in the middle-to-upper 30s which – obviously – would melt any snow that accumulated. Speaking of snow totals…

How much snow? Not very much. We are sticking with our forecast of roughly half an inch to one inch across much of the WHAS11 viewing area. Higher amounts are possible east of Interstate 65, especially in from around New Castle south to Columbia where 1-2” of snow may accumulate. Remember, with highs Friday afternoon well above freezing, this could be an event where an inch or two falls, but melts at a rate that by the end of the day nothing is left.

Things to keep in mind: Temperatures overnight should dip into the upper 20s, which would help keep snowflakes alive. However, the soil temperatures are still quite warm (in the upper 30s to lower 40s). This means that initial snow will melt soon after reaching the ground, but if it snows heavily enough early accumulation may be able to counteract the warmer ground. Because of initial snow melt, it’s unlikely your backward will see a full half-inch or one inch of snow once everything is done.

Impact: Thankfully, most of this will be a nighttime event when most of us are sleeping and traffic on the roads is light. That being said, don’t expect roads to be pre-treated with brine or other anti-ice chemicals as rain and drizzle would wash a lot of it away. Lingering snow showers Friday morning may cause travel problems, especially on any paved surface that did manage to freeze a liquid patch into ice. Be careful on the roads!

Weekend: After the snow Friday morning, the rest of the day should be uneventful outside of some stray flurries. A cloudy sky and a west wind between 5 and 10 miles per hour will keep it feeling extra chilly. A few snow showers will be possible again Friday night into Saturday.

Saturday itself does bring another opportunity to see light accumulating snow. This is from a quick-moving clipper system that might give us a quick additional half-inch during mainly the first half of the day. With temperatures still in the upper 30s in the afternoon, a wet and heavy rain/snow mix is possible. Road and soil temperatures will still be warm, so travel impacts should be minimal, but slick spots are always a concern.

Long term: Some sunshine should return briefly for us on Sunday, but we’ll still have plenty of clouds. Temperatures recover to around 50 degrees, and most of Sunday will be DRY until the evening and overnight as more rain showers begin to approach.

Credit: WHAS
More rain likely Monday as a cold front sags south. Some models are a little bit later with the onset of rain than this image.

Monday brings yet another cold front and another large area of rain across the region. Severe weather not anticipated. Temps will hold steady in the low 50s. Tuesday brings a break before the main event arrives Wednesday. Widespread heavy rain is forecast, but for now we will hold off on potential rain totals until we get through our snow chances. It’s a difficult temperature forecast too, as some models leave next week cooler than we are currently forecasting (highs entering the latter half of next week could be in the upper 50s close to 60 degrees).