More strong to severe storms are expected tonight across the metro Atlanta area. Refresh for the latest updates. 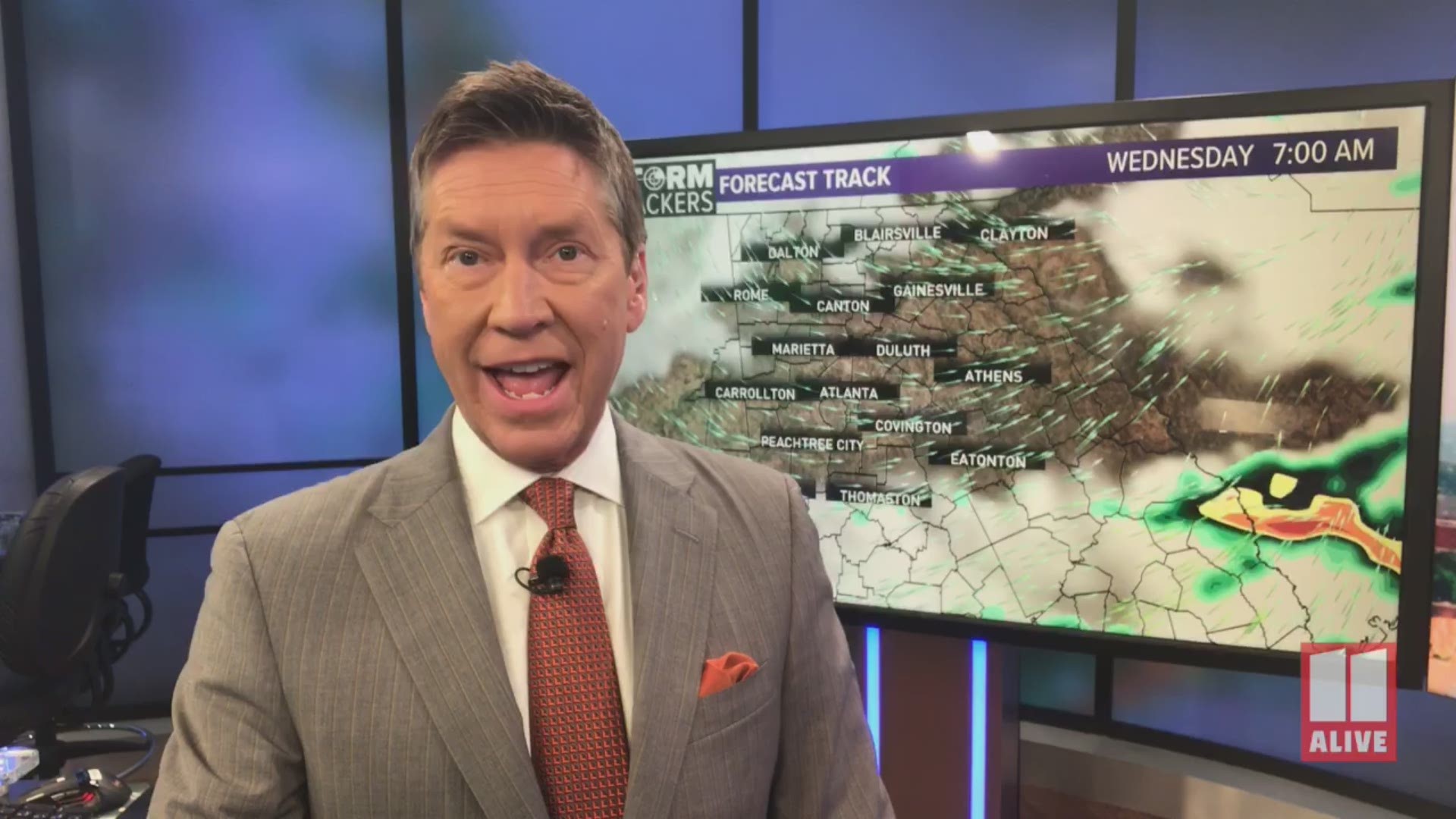 ATLANTA — A severe thunderstorm warning has been issued for a few Georgia counties.

Scroll down for details.

Strong to severe storms are expected to move across the region once again Tuesday evening and Tuesday night as a cold front moves through the state.

There is an elevated risk for up to quarter-sized hail, damaging wind gusts up to 60 mph and the development of isolated tornadoes in and near the highlighted areas. Isolated heavy rainfall is possible in some of the far North Georgia mountains.

According to 11Alive meteorologist Wes Peery, the strongest storms are expected to enter the northwestern corner of Georgia around 8 p.m., moving toward metro Atlanta.

Here's when to expect the strongest storms:

By 10:30 to 11 p.m., the strongest storms should be in or near the city of Atlanta itself, with threats nearing Fulton, Cobb, DeKalb, Gwinnett and surrounding counties.

By 2 a.m. to 3 a.m., the storms should be moving well to the east of Athens, away from metro Atlanta.

The strength of the storms should diminish during the overnight hours, as they will not have the heat of the day to fuel their fury.

By Wednesday afternoon, clouds are expected to clear out with highs in the low 70s.

The 11Alive StormTrackers are tracking these storms as they continue to move into the state over the course of the evening hours and overnight.

Stay with 11Alive for the latest updates and possible weather statements or warnings as the day progresses.

Here is the latest:

11:37 p.m. | The National Weather Service said a severe thunderstorm warning has been issued for Cobb, DeKalb, Fulton and Gwinnett counties until 12:15 a.m. March, 25.

At 11:35 p.m. a severe thunderstorm was located over Kennesaw, or 7 miles northwest of Marietta, moving east at 40 mph.

11:30 p.m. | Floyd County has been removed from the severe thunderstorm warning

10:55 p.m. | A severe thunderstorm warning has been issued for Bartow
Cherokee, Cobb, Floyd, Paulding, and Polk counties. It expires at 11:45 p.m.

The primary threat expected from the storms associated with this watch includes up to marble-sized hail, isolated wind gusts of up to 65 mph and the possibility of a couple of tornadoes.

1:15 p.m. | Meteorologist Wes Peery shares the latest run-down on the multi-threat for severe weather this evening.

10:25 a.m. | It's starting to rain near the Loring Heights/ Midtown area. Here is a look at Midtown Church.

7 a.m. | 11Alive Stormtracker, Carol Simmons, shares this photo of the fog from her home. She described the fog as "rough."

5:00 a.m. | A dense fog advisory was issued for the morning. It is expected to last until about 10 p.m. Expect low visibility.

Download the FREE app now in the iTunes store or on Google Play.

Be prepared for severe weather in your area 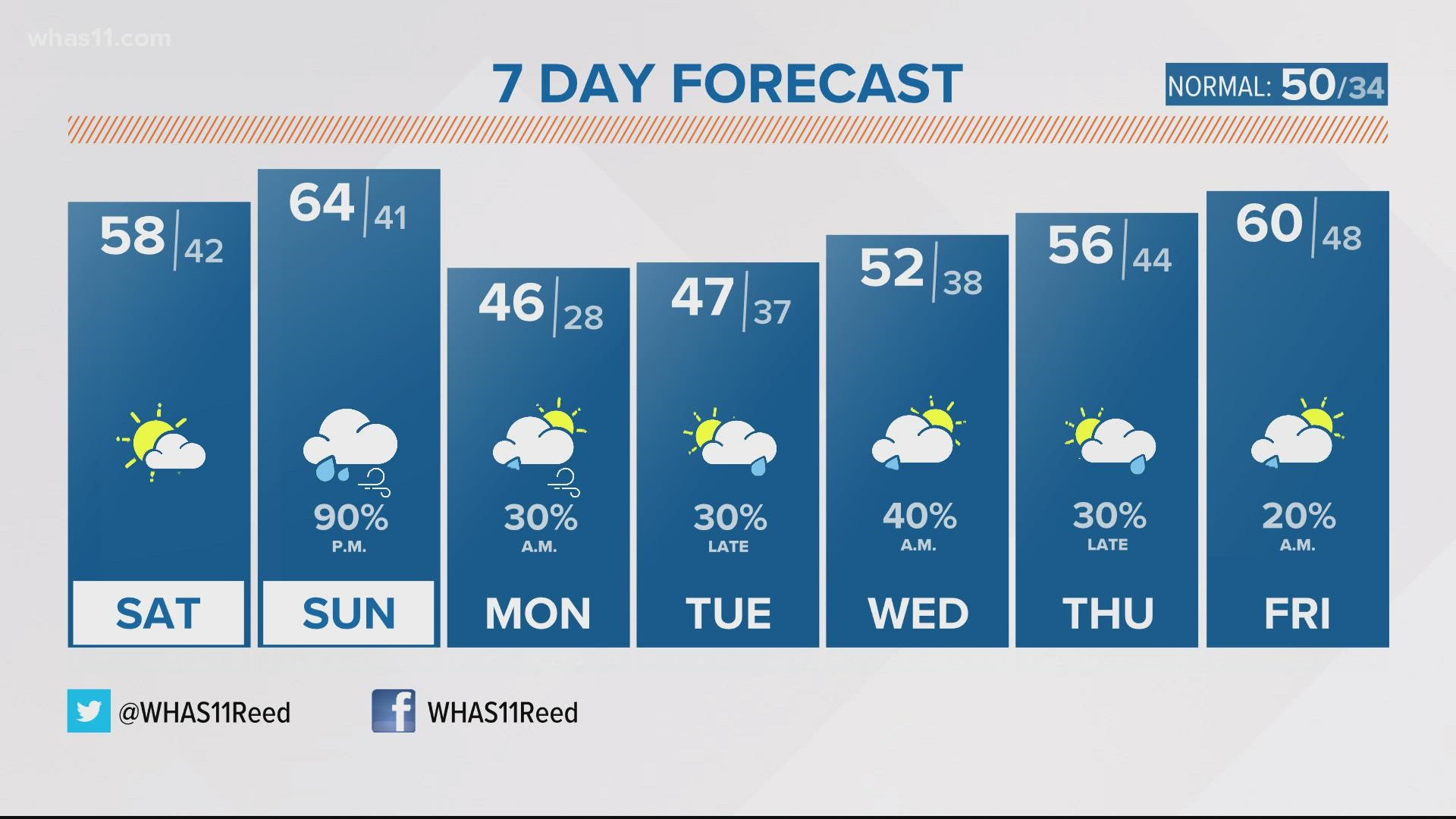