Delta could deal devastating blow to Mexico as a major hurricane

Hurricane Delta developed into the third major hurricane of the 2020 Atlantic hurricane season on Tuesday morning. 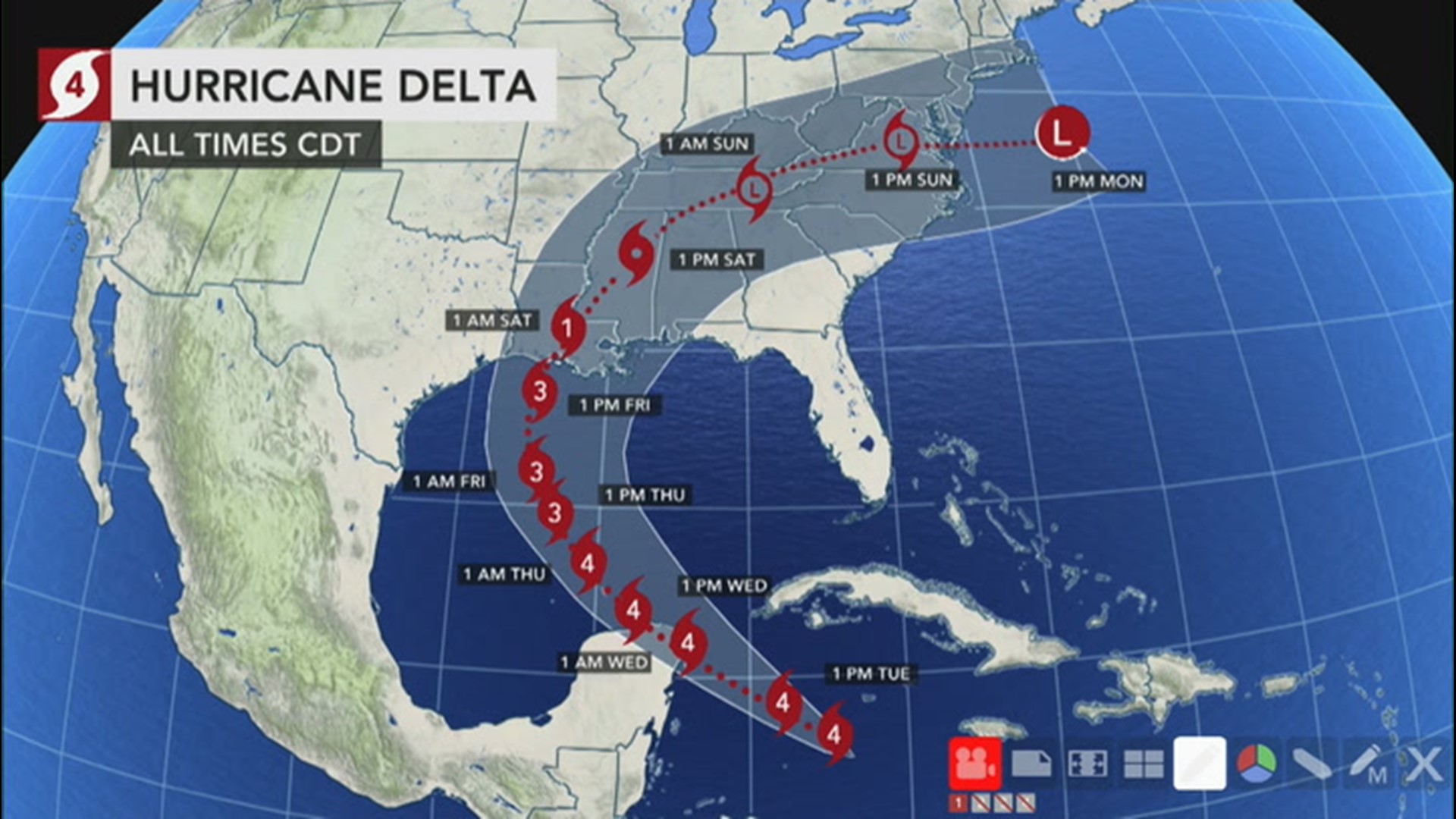 Only days after a deadly strike from Tropical Storm Gamma, Mexico's Yucatan Peninsula is now at risk from an even greater tropical threat as Hurricane Delta developed into the third major hurricane of the 2020 Atlantic hurricane season on Tuesday morning.

After becoming a hurricane over the Caribbean on Monday evening, Delta rapidly strengthened Tuesday as it exploded from Category 2 strength into an extremely dangerous Category 4 storm. On the Saffir-Simpson Hurricane Wind Scale a Category 4 storm has maximum sustained winds 130-156 mph (209-251 km/h).

As of 2 p.m. EDT, the center of Delta was situated about 260 miles (420 km) east-southeast of Cozumel, Mexico, according to the National Hurricane Center. The storm's maximum sustained winds had increased to 140 mph and it was moving at a brisk speed of 16 mph (26 km/h) to the west-northwest.

AccuWeather forecasters warn that the storm could bring a devastating blow to the northern Yucatan Peninsula before it navigates toward the United States late this week.

At 11 a.m. EDT Tuesday, Delta's maximum sustained winds had increased to 115 mph, making the storm a Category 3 hurricane on the Saffir-Simpson Hurricane Wind Scale. However, only about 20 minutes later, the National Hurricane Center updated its advisory to say Delta had reached Category 4 strength.

Hurricane warnings are in effect for Tulum to Dzilam, Mexico as well as the island of Cozumel. Both Tulum and Dzilam are towns located on the coast of the Mexican state of Quintana Roo. A tropical storm warning has been issued for the Cuban province of Pinar del Rio as well as the Isle of Youth. In Mexico, a warning is in effect for Punta Herrero to Tulum, and Dzilam to Progresso.

Wind shear is the increase in wind speed with altitude as well as the sudden change in wind direction from one location to another. Wind shear and changes in the structure of the eye are some of the main challenges in forecasting the overall strength of hurricanes.

Prior to hitting the U.S., Delta will bring torrential rain, damaging winds and battering seas to the northeastern Yucatan Peninsula from Tuesday night through Wednesday.

Delta is expected to strike the northeastern Yucatan Peninsula, near Cancun, as a powerful Category 4 hurricane with maximum sustained winds of 130-156 mph (209-251 km/h). Delta would be only the fourth storm since 1910 to make landfall within 50 miles of Cancun as a major hurricane.

One of the greatest impacts from Delta across the northeastern Yucatan Peninsula is expected to be damaging wind gusts of 100-120 mph (160-193 km/h). While tropical-storm-force winds (40 mph or 64 km/h) can arrive on Tuesday evening, the strongest winds from Delta are not expected until late Tuesday night into early Wednesday morning.

An AccuWeather Local StormMax™ wind gust of 140 mph (225 km/h) is expected near where the center of Delta passes. It is possible the strongest winds may be felt in Cancun and surrounding areas.

Winds of this magnitude can produce widespread damage and power outages that could last for days or week. Weak structures can be destroyed and even well-built homes and businesses can sustain some damage, including roofs being blown off and walls collapsing.

Even well away from the storm's center, Delta's outer rain bands can produce locally damaging winds in extreme western Cuba.

In addition to destructive winds, Delta is expected to produce flooding rainfall across the western Caribbean from the northeastern Yucatan Peninsula to western Cuba and the Cayman Islands. In the hardest-hit areas, rainfall of 4-8 inches (100-200 mm) and an AccuWeather Local StormMax™ of 12 inches (300 mm) can leading to serious flooding.

Delta is also forecast to unleash a dangerous storm surge of storm surge of 6-10 feet along the northeastern tip of the peninsula. A 3- to 6-foot storm surge along the southwestern coast of Cuba can lead to coastal flooding through Tuesday night.

The Yucatan Peninsula and western Cuba received heavy rain from Tropical Storm Gamma just days ago, so additional rain from Delta can more easily lead to flooding. At least six deaths were blamed on Gamma as the strong tropical storm's heavy rain caused flooding and mudslides.

Conditions in the western Caribbean will improve rapidly on Wednesday as Delta pulls away and into the Gulf of Mexico. On the AccuWeather RealImpact™ Scale for Hurricanes, Delta is forecast to be a one in the western Caribbean and a four in the northeastern Yucatan Peninsula. This scale, developed by AccuWeather, gives a broader impact from tropical storms and hurricanes on land areas than does the Saffir- Simpson Scale, which is based solely on wind speed.

This year, Cristobal, as well as every named storm from Edouard through Delta, set early-formation records. Most of the previous record-holders were storms from the 2005 season. Delta from this year knocked off the 25th storm from 2005 that was named Gamma. In 2005, Gamma did not form until Nov. 18.

Delta is the 25th named storm of the 2020 Atlantic hurricane season, which continues at a record pace and even well ahead of the notorious 2005 season. The only other season which required the use of Greek letters of the alphabet for storm names was in 2005. Six Greek letters were used that year, and the season concluded with Zeta.

Delta is also the third major hurricane of the Atlantic season, joining Laura, which struck southwestern Louisiana in late August, and Teddy, which brushed Bermuda on its way to striking Atlantic Canada as a post-tropical cyclone last month.