District 8 Councilman Brandon Coan, behind the project, said the changes are intended to decongest the corridor between Highland Avenue and Eastern Parkway. 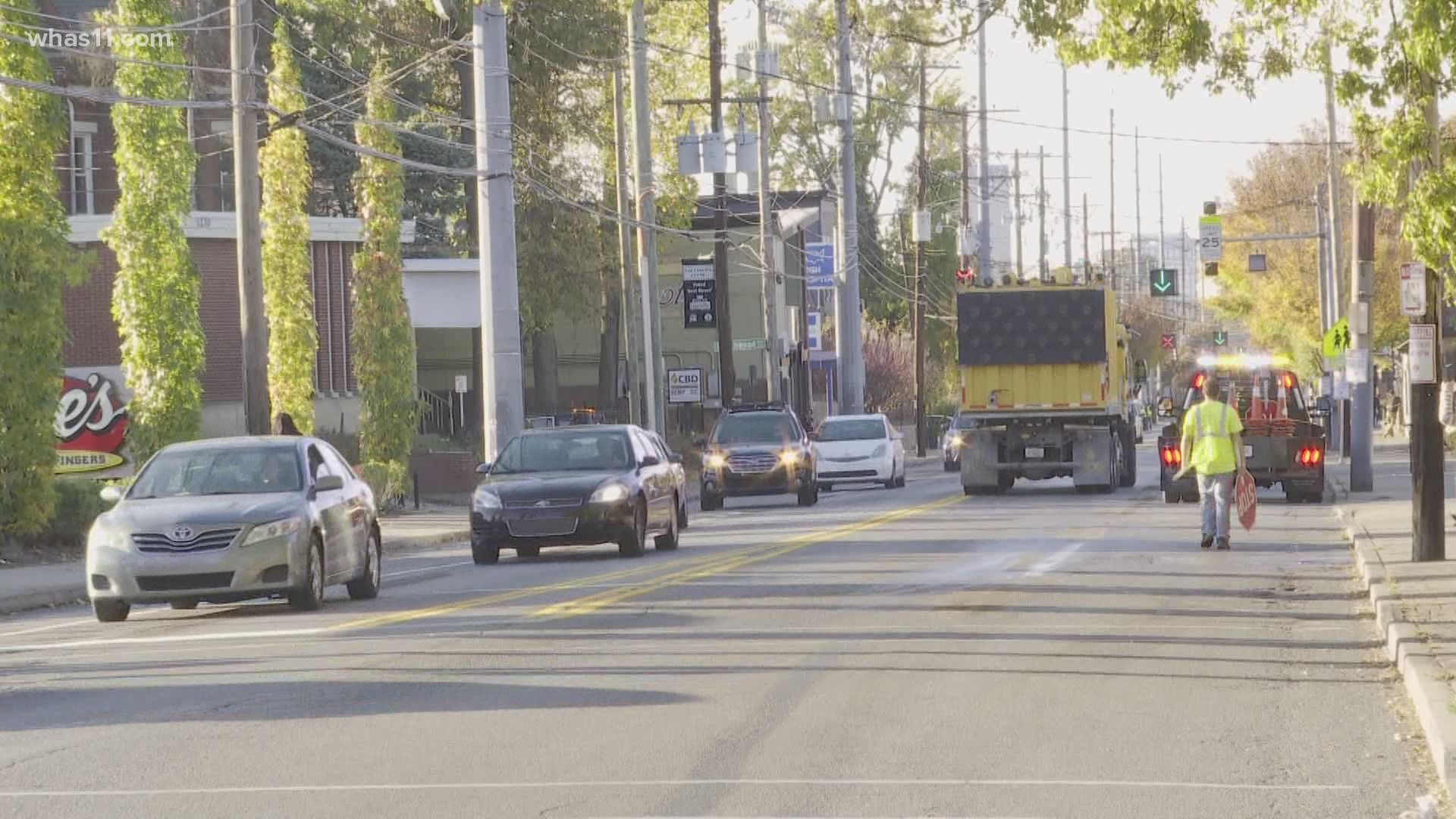 "It's dangerous. That's the first word that comes to mind when I think of how the road has been," Co-owner of Parkside bikes, Jimmy Flaherty, said.

With Flaherty's business on Bardstown Road for 10 years, he said changes are welcome.

District 8 Councilman Brandon Coan, behind the project, said the changes are intended to decongest the corridor between Highland Avenue and Eastern Parkway on Bardstown Rd.

"It's really intended to help calm Bardstown Road, make it less of a commuter thoroughfare and more of a neighborhood serving, commercial corridor," Coan said. "The traffic should be a little bit slower, a little bit calmer, a little bit quieter, and the streetscape should be more enjoyable for people and safer for people that are traveling the road."

The stretch of Bardstown will now be one lane in either direction, with 24/7 parking on either side, and left turn lanes now at the intersections where they weren't before.

"We are thrilled with it," Flaherty said. "We're really looking forward to the traffic calming and just the overall making the neighborhood better. Don't see it as a bad thing."

Flaherty said he hopes the changes will be extended through more of Bardstown Road, as well as a lower speed limit and more crosswalks. But he said the safety changes are the biggest benefit he hopes to see.

With parking on both sides of the road, Flaherty is also hopeful the changes will be good for business.

"I think it's going to be great. I think that taking back the road for the neighborhood is the single most important thing we can do to help businesses and to help the character and the quality of this commercial corridor," Coan said.

Not as happy with the changes, cigar shop owner of J Shepherd, Jason Shepherd, said it's already caused an issue.

"I came this morning to find about five or six of these signs up and down Bardstown Road where my customers normally park," Shepherd said.

Shepherd said there's a new TARC bus stop in front of his shop, where it was moved from up the road. Having heard about the project prior to Wednesday, Shepherd said he was excited about the changes and potential for more parking in front of business.

That's why he said he was caught off guard by the TARC stop Wednesday morning. He said bus riders at the stop were already posing a potential safety issue.

"They've been congregating here. I have customers in cars pulling into the parking lot missing them by inches," he said. "I haven't seen any better traffic flow as of yet and apparently everybody got 24-hour parking except for me. I lost at least five or six parking spaces, plus a blockage to the entrance to my store and my parking lot."

Shepherd said he's reached out to Councilman Coan, city engineers and TARC to try and address his concerns.

"I keep getting pushed up the ladder. No one can explain to me who put this here, why it's here and why they cannot move it," he said.

"I sent that forward to the local and state engineers. We want to make sure nobody missed any small details in the planning," Coan said.

Shepherd said he's hopeful his concerns will be resolved, but fears it will take time and "aggravation."

This week's changes are just one part of a larger project by the Kentucky Transportation Cabinet, which Coan said will involve new lighting, re-paving, and other major changes to the entire corridor.

"This is sort of a hint of what's to come but a really important start," he said.

Coan said the re-striping this week cost about $50,000. The entire project, he said, costs roughly $7-7.5 million and he's hopeful the final stages will be completed by the end of 2021.

While Coan will not be in office to see the project's completion, he said he hopes city leaders continue to prioritize the road's improvements.

Road-work crews will continue work on the stretch of Bardstown Road on Thursday, Nov. 5 from 8 a.m. to 4 p.m.