The four-person crew has solidified their moment in history. 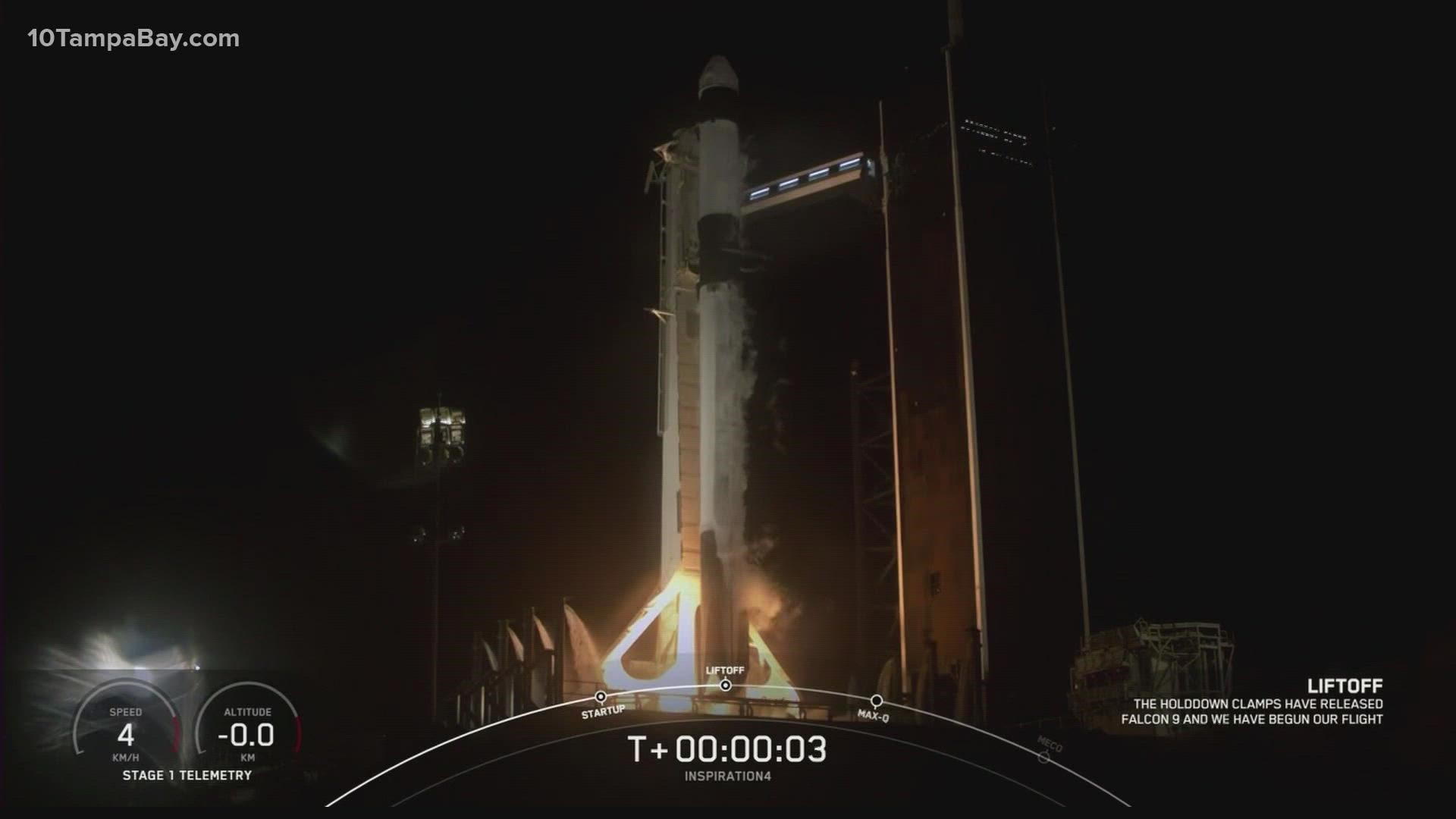 CAPE CANAVERAL, Fla. — The four-person Inspiration4 crew has officially proven that a ride into space no longer requires being a professional astronaut.

Now, the crew, who spent months training for their history-making moment, will embark on a multi-day journey orbiting the planet we call home every 90 minutes.

Liftoff went off without a hitch at 8:02 p.m. ET on Sept. 15 from the historic Launch Complex 39A at NASA’s Kennedy Space Center in Florida. The crew, comprised of Jared Isaacman, Hayley Arceneaux, Chris Sembroski and Dr. Sian Proctor, got a ride into orbit from the Crew Dragon spacecraft atop a Falcon 9 rocket.

The mission plans to "inspire support for St. Jude Children’s Research Hospital and send a humanitarian message of possibility while representing a new era for human spaceflight and exploration."

Onboard the Crew Dragon capsule, the civilian crew will conduct experiments "designed to expand our knowledge of the universe." According to SpaceX, the research will look at the impact of spaceflight on the human body.

Investigators will also "collect environmental and biomedical data and biological samples from Inspiration4’s four crew members before, during, and after this historic spaceflight," a press release reads.

Key details to keep in mind

If you were unable to catch all the action live, don't worry. You can watch the launch in its entirety below:

8:13 p.m. | September 15: The Falcon 9 rocket's first stage's landing has been confirmed on the "Just Read The Instructions" droneship.

The launch escape system is armed and we’re about 35 min from the launch window start at 8:02pm! @10TampaBay pic.twitter.com/fRaBx3UqiG

7:20 p.m. | September: The crew access arm has retracted, marking one of the last major visual milestones for liftoff.

7:10 p.m. | September 15: NASA comments on what the Inspiration4 launch means for the future of private companies transporting cargo and people to low-Earth orbit.

#Inspiration4 embodies our vision for a future in which private companies can transport cargo and people to low-Earth orbit. More opportunities to fly = more opportunities for science: https://t.co/yqmC68iEIw pic.twitter.com/uuhoIyI8Vx

6:35 p.m. | September 15: Inspiration4 drops more crew pictures at the launch complex. The mission is about 90 minutes out from liftoff.

We're getting close and the skies look great. About 90 minutes to the beginning of our #Inspiration4 launch window! pic.twitter.com/3kskkWZ4qq

Crew of @inspiration4x arriving at Launch Complex 39A for flight pic.twitter.com/nHcOaizlR2

5:42 p.m. | September 15: A comms check has been cleared and the crew's seats have been rotated. The mission's closeout team is checking the cargo onboard ahead of hatch closing.

5:27 p.m. | September 15: The crew is suited up and being strapped into their seats. Next up, awaiting hatch closing.

Thank you for visiting our #Inspiration4 crew before their departure to Launch Complex 39A, @elonmusk! 👊 pic.twitter.com/VaOXEH2tMb

4:15 p.m. | September 15: Here we go! The Inspiration4 all-civilian crew is on the move. Next up, getting suited up for their mission

Crew send off before they make their way to Launch Complex 39A pic.twitter.com/pa5pXaAdNm

4:04 p.m. | September 15: Fueled up and ready to go! The Inspiration4 crew grabs a bite before only having access to space food for a few days.

The #Inspiration4 crew has fueled up for flight! pic.twitter.com/ypJImAnQmF

2:56 p.m. | September 15: NASA Administrator Bill Nelson comments on the Inspirtation4 launch, saying it "reminds us of what can be accomplished when we partner with private industry!"

The #Inspiration4 launch reminds us of what can be accomplished when we partner with private industry! A commercial capability to fly private missions is the culmination of NASA’s vision with @Commercial_Crew

1:19 p.m. | September 15: SpaceX shares that all systems and weather are looking good for today's launch.

11:48 a.m. | September 15: Hayley Arceneaux, who represents the mission's pillar of hope, sends a message ahead of her historic launch.

"This is for everyone who’s ever been through something difficult, and I know we all have. Hold onto hope because there WILL be better days."

I want to thank everyone for all the support, encouragement, and love. And thank you to @stjude for being the reason I’m here today.

This is for everyone who’s ever been through something difficult, and I know we all have. Hold onto hope because there WILL be better days 💕 pic.twitter.com/oxIUq5hxUz

10:55 a.m. | September 15: It's launch day! SpaceX is slated to start giving an inside look into pre-launch preparations approximately four hours before liftoff.

1:06 a.m. | September 15: The Falcon 9 rocket and Dragon capsule are currently at Launch Complex 39A at NASA’s Kennedy Space Center in Florida.

Falcon 9 and Dragon on pad 39A in Florida. Five-hour launch window for @inspiration4x opens at 8:02 p.m. EDT on September 15 https://t.co/bJFjLCzWdK pic.twitter.com/e7WTsNPavA

September 14: The Inspiration4 crew discusses their upcoming three-day mission during a Q&A.

Watch live as the @Inspiration4x crew talks about their upcoming three-day spaceflight https://t.co/14dXTUdxak

Dress rehearsal for launch ✔️
We are SO ready! 🚀

September 12: Inspiration4's weather conditions are said to be 70-percent favorable ahead of liftoff. The mission begins targeting an 8:02 p.m. launch window.

With the #Inspiration4 launch now just 3 days away, weather conditions are 70% favorable and we’ve narrowed our launch window to 5 hours beginning at 8:02 pm EDT on 9/15. Stay tuned for more updates soon! https://t.co/nhZRJvvX1l pic.twitter.com/Z4pRlmv4Ew

September 11: The four-person crew gets a look at their spacecraft as launch day nears.

Resilience is ready to roll. She is on the Falcon and it is a beautiful sight! @ArceneauxHayley @DrSianProctor @rookisaacman @inspiration4x pic.twitter.com/W9pO1XQHOL

September 10: Falcon 9 and the Crew Dragon await launch day in the hangar at Launch Complex 39A.

Falcon 9 and Dragon in the hangar at Launch Complex 39A ahead of launching @inspiration4x pic.twitter.com/xSygsTmuHY

What an entrance to Florida’s Space Coast for our #Inspiration4 crew — landing at @SpaceFlorida’s Launch and Landing Facility! pic.twitter.com/YajBfVDvIi

September 3: Inspiration4 crew completes their flight readiness review and is given a "go" for launch.

#Inspiration4 and @SpaceX have completed our flight readiness review and remain on track for launch! Read more about launch details and potential timing here: https://t.co/Wj7hSWDOXZ pic.twitter.com/X8L9ZKk8Wl

September 1: A sneak peek of the crew's Dragon capsule shows it has been adapted to include a dome to give Inspiration4 some pretty incredible views of Earth.

A look at Dragon’s Cupola, which will provide our Inspiration4 astronauts with incredible views of Earth from orbit!

The crew visited the flight-hardware Cupola in California before it was shipped to Florida for integration with Dragon Resilience. pic.twitter.com/9ivMZrS1ip