The vessel sustained damage to its hull in mid-April. The owner is now working to salvage the vessel. 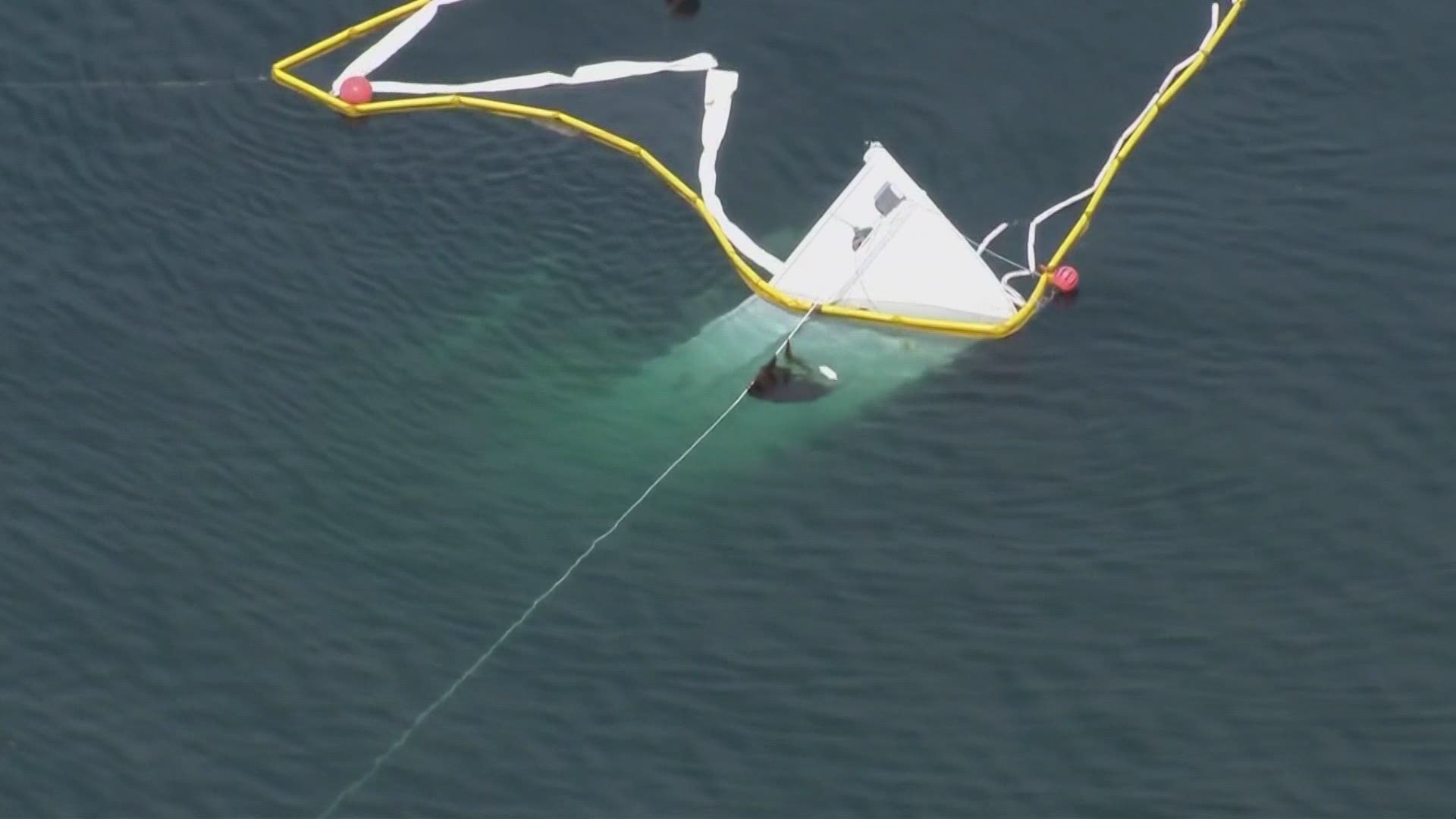 On April 17, the 76-foot Norwester sustained heavy damage to hull when it struck submerged rocks near Prevost Harbor on Stuart Island, Coast Guard officials said. The eight people on board were rescued.

"It would later be determined that there was in a fact a one-foot-by-four-foot hole in the hull," said Petty Officer Michael Clark of the U.S. Coast Guard. "Water pumps aboard the vessel were unable to keep up with the flooding."

The Coast Guard issued a Captain of the Port Order to the vessel's owner, requiring the owner to take necessary action to salvage the vessel.

As of May 9, the vessel was being held in position with multiple anchors off McCracken Point on Henry Island. A sheen containment boom was also deployed to help mitigate the environmental impact. Initial photos shared showed most of the craft upright but low in the water, though images captured by SkyKING Monday revealed just the tip of the bow remains above water.

There is no immediate major threat to the environment, according to the Coast Guard, which added a GPS beacon and light have been installed to help vessels avoid the stricken craft. It is not expected to pose a navigational hazard in its current location.

Towline Marine Assist helped respond to the initial mayday call. Captain Deb Fritz said they sent a diver into the water, who reported the keel was dislodged. The vessel had nearly 500 gallons of diesel on board at the time, which has since been pumped out.

The Norwester was built in 1932 and owned by Charles Gilbert. It was sold in 1937 and used as a patrol boat during World War II. It was eventually sold to Hollywood legend John Wayne.

Recently, it was in La Conner as a museum showcasing items owned by Wayne and props in his movies before being sold. In 2017, Evening toured the historic boat.

Rick and Jackie Rutherford now own the Norwester, and were preparing to run high-end charters on the wooden yacht, with 100% of net proceeds going to cancer research. The vessel was on its final shake-down cruise when it sank, the Rutherfords said.

"We feel so blessed we got to share 3 1/2 years with her and made some of the best memories of our lives that we wouldn't trade for anything," Rick Rutherford wrote.

Though the couple initially was raising funds on GoFundMe to recover and restore the vessel, new surveys of the damage have led them abandon that idea and return the donations. Now they are working to have it removed, but said they're struggling with their insurance companies to cover the cost and liability of salvage operations.

The Coast Guard said as long as the owners keep working on the issue, there's no hard deadline for removal because salvage operations are often dynamic and complicated. In the meantime, private salvage companies are checking the site twice a day and reporting to Coast Guard monitors on any spills or changes. 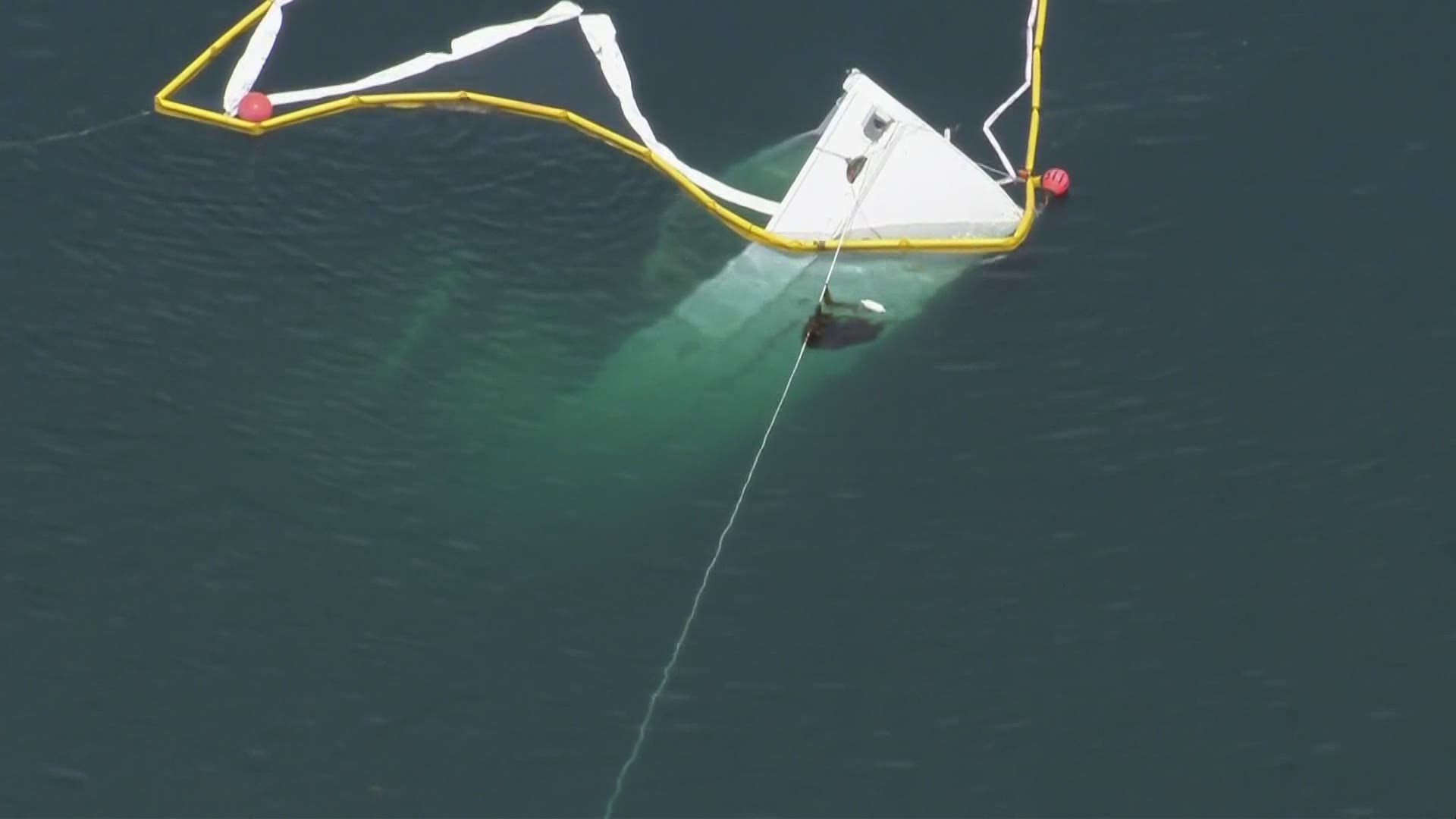