UTSA football coach Traylor pressing on despite constraints of coronavirus 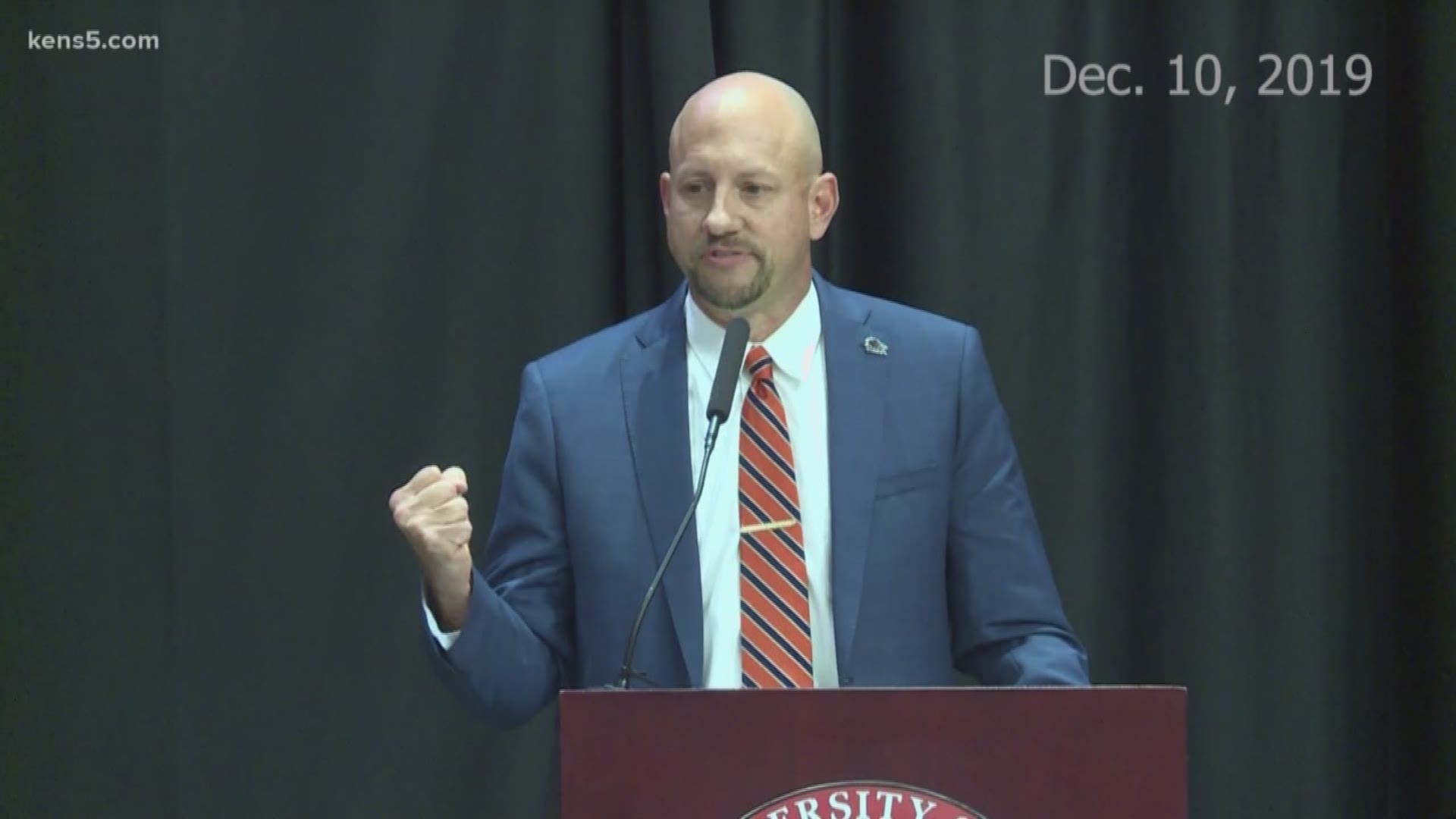 Traylor certainly is facing one as he prepares for his first football season at UTSA, where he was hired as the Roadrunners' third head coach last Dec. 9.

Traylor was eagerly awaiting the start of spring training last month when the deadly coronavirus changed everything, relegating sports to an afterthought amid the panic of a pandemic.

The UTSA campus remains closed and all spring sports, including football spring training, have been canceled. Never one to wring his hands, Traylor has worked to give his players some much-needed structure during these days of upheaval.

"Everybody knows this is not ideal," Traylor said Tuesday, while taking a break from calling high school recruits. "But we have to make the very best of it right now. That's all we can do. I think it's always important to state that this does put things into perspective.

"It is a huge deal for us to be going through this, but it's not near as big a deal as when you look on the TV and see people dying and losing their jobs. Almost all of us knows someone who's had somebody pass away from it (COVID-19), which makes it more real."

With the campus shut down, athletes are prohibited from working out at school. But Ryan Filo, the Roadrunners' director of strength and conditioning, has continued coordinating the team's offseason program via computer.

With private gyms closed, players have no other choice but to work out at home.

"The ones who don't, we've all tried to get them to share with each other. Coach Filo has done a great job of being creative, and giving each kid his own workout."

Traylor starts his days early and works late, keeping in touch with his players and staff via computer, phone calls and text messages. There are others he calls daily.

Although Traylor hasn't had any contact with his new players since before spring break last month, they are never far from his mind.

"It's kind of like my whole career has been," Taylor said. "I've said this a bunch. It's always about the kids for me. The moment I see those kids, and we're on the computer together, I know we're going to be fine. They're 18 to 22 years old and they're concerned.

"It just resonates with me that this is my time to lead. Right when this thing (COVID-19) started, I was reading some book and it mentioned this. I've used it before, that God wouldn't put Goliath in your life if he didn't think there was some David in your heart. This is one of those moments when we've got to step up."

Credit: KENS 5 File Photo
Born and raised in the East Texas town of Gilmer, Jeff Traylor was an assistant coach at Texas, SMU and Arkansas before getting hired at UTSA.

Traylor, 51, was associate head coach at the University of Arkansas the past two seasons before being hired to jump-start San Antonio's fledgling FBS program.

A highly successful high school coach at Gilmer in East Texas, Traylor also has been an assistant coach at Texas (2015, 2016) and SMU (2017). He was an associate head coach for offense at UT under Charlie Strong in his second season with the Longhorns, and was associate head coach in his only season at SMU.

Born and raised in Gilmer, Traylor went 175-26 in 15 seasons at his alma mater, leading the Buckeyes to three state titles and two state runner-up finishes. Buckeye Stadium in Gilmer was renamed in Traylor's honor last year.

While Traylor strives to be positive, he's also a realist. He has no illusions about the challenges that lie ahead for the UTSA football program.

Just as fire tempers steels, adversity reveals the character of a person.

Credit: Photo by Antonio Morano bit.ly/XR79FT / Special to KENS5.com
Larry Coker, who led the Miami Hurricanes to the BCS national title in 2000, coached UTSA for its first five seasons before getting fired in 2016.

Traylor has developed a warm friendship with Larry Coker, who coached UTSA for its first five seasons before getting fired in January 2016. Coker, who still lives in San Antonio, has become "very involved" in the Roadrunners' program, Traylor said.

"He came to our big recruiting signee party (in February)," Traylor said. "We've had lunch together with boosters. There's nothing I've asked Larry to do so far that he hasn't done. He's been very willing to help, wants to help. He's very revered in this town, as he should be."

Traylor shared an anecdote about the respect Coker still commands.

"The night that he came to our big signing party, I went up to my coaches and I said, 'Hey, have all you all gone over and said hello to Coach Coker?'" Traylor said. "And they said, 'We all had our picture taken with him. He's a hero of ours.'

"I thought that was kind of funny. Not only did they introduce themselves, they got their picture taken with him."

UTSA is scheduled to open its 2020 season against defending national champion LSU on Sept. 5 in Baton Rouge, La.