'It's like playing in the backyard': Brothers from Congo hope to bring Butler Soccer a region title

For these three, sibling soccer goes from the high school pitch all the way back to the neighborhood. 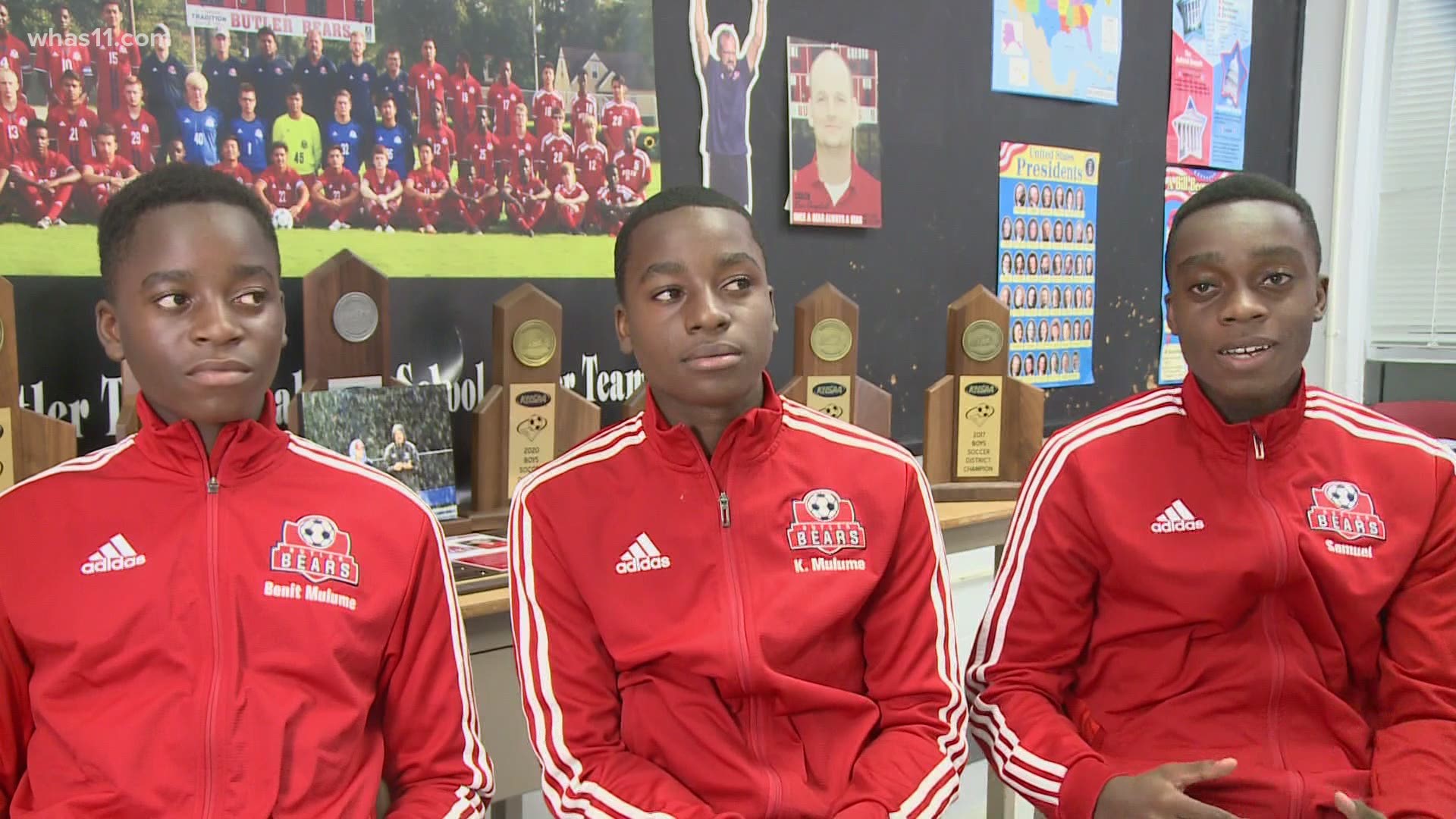 LOUISVILLE, Ky. — Butler boys soccer head coach Mario Carrillo estimates he's coached players from about 15 different countries. The Air Force veteran said his current Bears roster, which is chasing a fourth region title in five years, is made up of about 85% of players with international backgrounds. And they all share a common thread.

"They all speak the same language and that's soccer," Carrillo said. "They come here with one goal in mind and that's to get a good education, which is Butler Traditional, and to be part of a great soccer program and to win titles."

That includes a competitive Congolese trio of brothers in Samuel, Kevin and Benit Mulume.

"I hate losing to them and if they lose to me," Kevin said.

"If they lose to me, they're going to hear about it," Kevin continues with a laugh.

Samuel is the oldest at 18, with Kevin in the middle at 16 and Benit the youngest at 14. For them, sibling soccer goes from the high school pitch all the way back to the neighborhood.

"We used to get in trouble pretty much every day of the week because we'd come home late from playing with our friends together," Kevin said.

"It used to be this group versus the other group and most of the time, we used to be in the same group," Benit said. "We used to know where to move the ball and we knew where the other person was going to be before passing."

That chemistry has carried over the years and really came in handy this season, when all three brothers have gotten on the field at the same time. Carrillo believes it might be the first time three brothers have ever been on a field together as varsity teammates for Butler athletics.

"Collectively, when they're on the field together, they make a big difference," Carrillo said.

"I would say it's like playing in the backyard because to this day, we just go outside to play one on ones," Kevin said. "So, we learn what each other is going to do."

"If someone loses, they want to work harder," Samuel said. "So, if he loses and I win, and I see him working hard, I know he's going to improve. So, that's why I got to work too."

Of course, that isn't the only motivation. The brothers also consider the life their parents wanted them to have when their family, which has nine total children, came to America from Congo in 2015.

"Our dad always tells us that he had a pretty decent life where we came from," Samuel said. "But he just brought us here because he wanted us to experience different stuff and get to learn different lifestyles."

"Their parents have done a fantastic job raising these kids," Carrillo said. "Their parents have recognized in coming here how important education is. And they have instilled that into not just the three brothers, but their entire family."

"That's the biggest thing for me," Kevin said. "Because people say their stories and stuff like that. But for me, I always try to remember where we came from. That's what keeps me going every day."