A few years ago, Spalding purchased 7.3 acres just a few blocks west of its downtown campus to house their new complex and support their student-athletes. 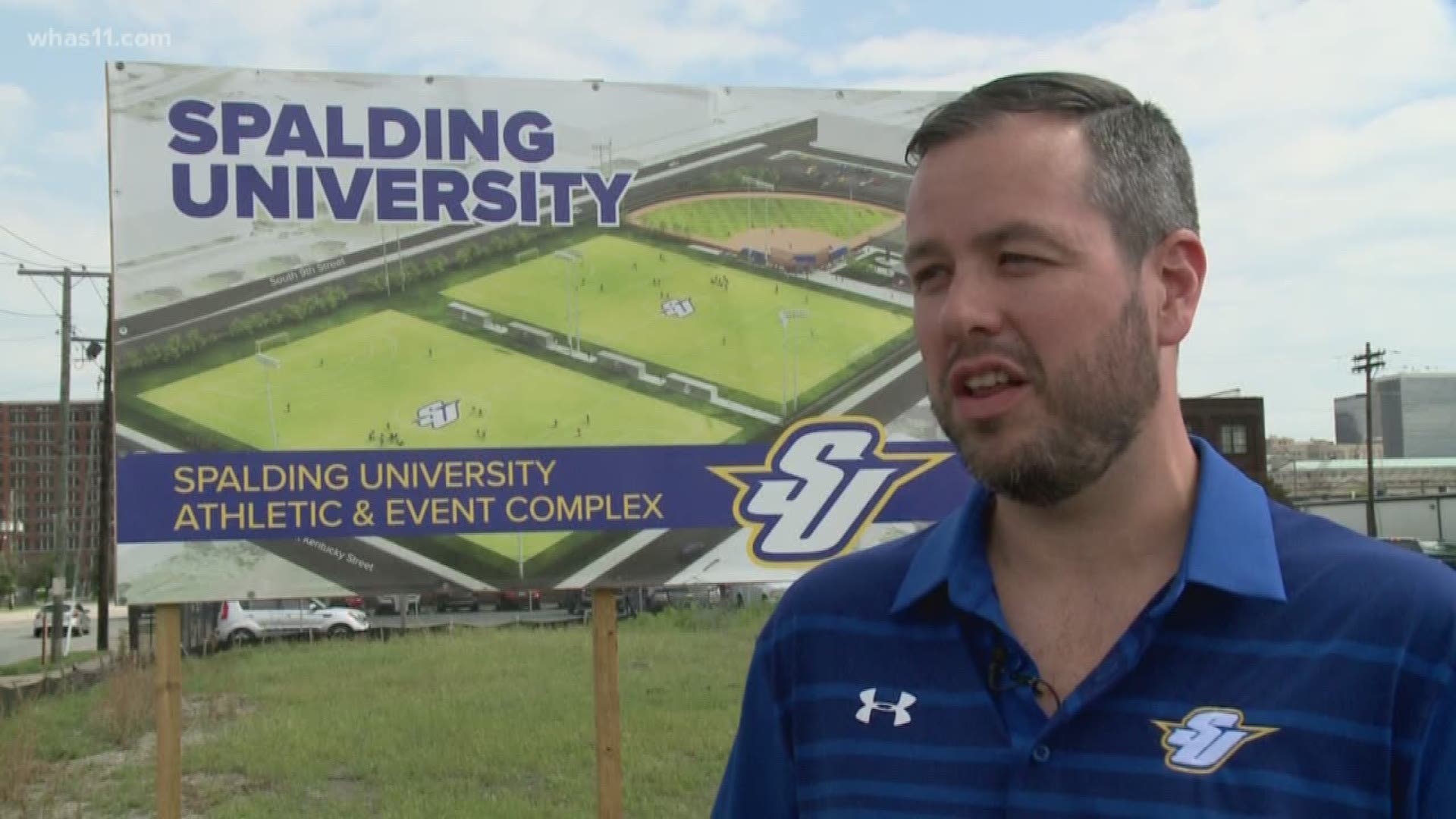 LOUISVILLE, Ky. (WHAS11) -- You may have seen the signs around downtown Louisville – billboards with pictures of beautiful green fields, and then a blue banner along the bottom with white letters announcing the Spalding University Athletic and Event Complex.

“This has been in the works for a couple of years,” says Steve Jones, a spokesperson for Spalding Athletics. “What's going to be a transformative softball and soccer complex that would have two soccer fields and a softball field for our NCAA Division III athletic department.”

Now, what you haven’t seen is any current field complex for Spalding University athletes. No, you haven’t been missing out. There simply isn’t one.

“Our soccer teams play at Champions Trace Park,” explains Jones. “Softball team plays at Holy Cross. They've played at different spots around the city over the years. So, that involves driving off campus. That involves fans and family having to go off campus to those games.”

Jones adds that Spalding really wants to create more of an undergraduate atmosphere or college campus community for its students.

An easy way to build a school’s camaraderie is a common passion for the university’s sports teams.

“There's no comparison, no parallel to what it's like having a college sports atmosphere, a college sports game you know with fans and a student section,” Jones says with a smile. “Even beyond the recruiting advantage, I think it's just a chance for people to have, really our players our coaches to have just that real sense of pride, real home field advantage. It definitely would give Spalding just a huge feel of a college environment that we're always trying to have downtown down here.”

So, a few years ago, Spalding purchased 7.3 acres just a few blocks west of its downtown campus to house their new complex and support their student-athletes.

“It was old industrial property and classic brown fields and wasn't an area that anybody really wanted to touch,” explains Spalding President Tori Murden McClure, as she stands on the property and looks around the space covered in gravel and sparse plants smiling with pride. “We do talk about that our athletes are student-athletes, not athletes who happen to be students.”

Which, for Spalding University, is an important distinction. Forty percent of the last two incoming freshman classes played sports for the Eagles. If you lump in the entire undergraduate student body, 30 percent are Spalding athletes.

“A huge percentage of our undergraduate population are athletes,” adds Jones. “It's a major part of why people want to come to Spalding.”

For Spalding, though, the importance of this project goes beyond the fields themselves. The location was crucial. By placing the complex along 9th Street between W. Kentucky Street and W. Breckenridge Street, the hope is that this will boost resources that go beyond just Spalding University.

“We are transforming the neighborhood!” exclaims McClure. “Muhammad Ali learned to box in the Columbia Gym which is part of Spalding. It was an integrated gymnasium even back in the 50s. So that notion of building playing fields on 9th Street is what we consciously wanted to do. The problem is, it's been really hard to raise money for building playing fields on 9th Street because there is sort of that visceral reaction from most of Louisville going, 'Ah! 9th street!' But if we don't invest, and try to change that perception or change who we are, then what good are we doing on the planet?”

“I think constantly Spalding has taken the lead in trying to be a bridge of diversity in the city – I mean, a spot of activity in downtown and this part of SoBro,” Jones adds, standing on Spalding’s future fields property and gazing westward towards 9th Street. “Neighbors to the west, neighbors to the east: I think we are right in the middle and it's always going to be a spot where people are welcome.”

For McClure, one of the visions she has for the university is bringing more green. For presidents, that usually means money which, let's face it, is a necessity. But in McClure’s case, it’s a lot more literal: she wants to make the land greener.

“One of the things I'm really proud of what we've done at Spalding in the last decade is really trying to green the neighborhood, trying to create a different image,” she continues. “Now, even when I fly over Louisville, I look down and say, 'Oh! That green space is Spalding!' And we are creating more and more green. And this is going to be 7.3 acres of green at the heart and the doorway to the West End or the West Side of Louisville as my husband likes to say.”

McClure also wants another aspect of the project to be clear. This is to be called the Spalding Athletic Fields and Event Space.

“I can totally see us doing summer camps for youth behind us and all sorts of other things taking place,” McClure explains as she extends her arms outward to show the expansive blank canvas of ground behind her. “It'll be turf and not grass, because we want to be able to use it 24-hours-a-day, seven days a week because that's who we are, that sense of coming together and positive activities and that engagement. It's right where we want to be. And to turn a brown field into a green field is as good as it gets. And that's what we need to be doing.”

COLLEGE ATHLETICS IS AN ACHIEVABLE DREAM

The university wants the youth of Louisville to see that the doorway to a positive future is always open. College is possible and being a college athlete is absolutely possible.

“[Spalding’s athletes] are in a sense some of the truest student-athletes that there are,” says Jones. “We don't have athletic scholarships in NCAA Division III. They're playing truly for the passion of the game and because they want to continue playing the game. So, to give them the best facilities possible; to give them a home field for their fans, their family and for other students to come watch them, would be the height of pride for our university when this facility gets finished.”

To learn more about the project, or to help support he initiative, click here.