Nadia Nadim and Cheyna Matthews scored their first goals as Louisville players in the second half for the win. 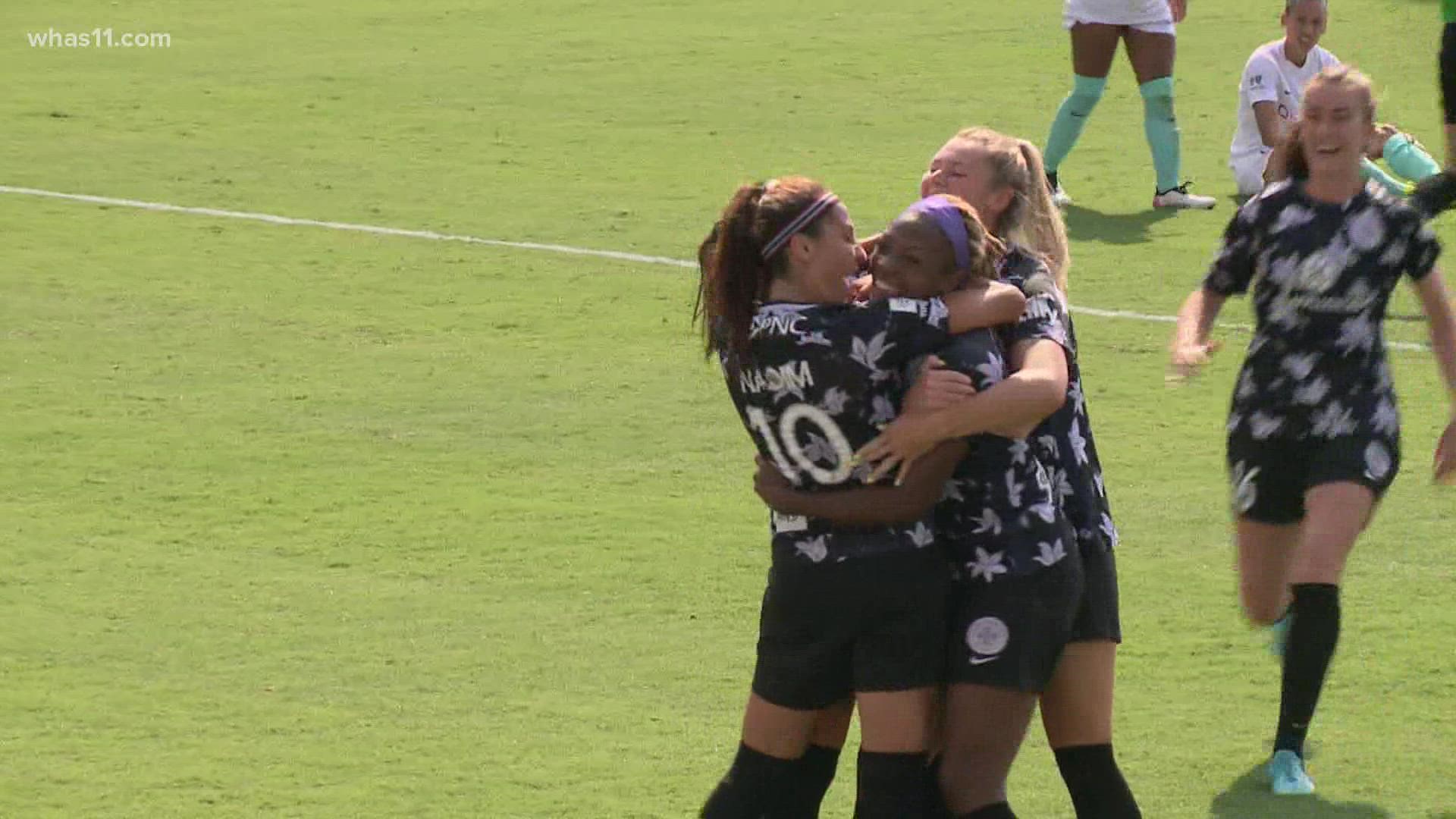 LOUISVILLE, Ky. — Just a couple minutes after giving and going its way to the best team goal of the season, Racing Louisville FC made the same type of mistake that led to a winless July.

The club couldn't properly clear a cross from a Kansas City free kick, leading to a visiting score right before the half, tying the game at one. It sent Louisville head coach Christy Holly to a frustrated locker room.

But a difference was on display Sunday that perhaps had been building through the draw and three losses from last month. The chances and chemistry growing within the group's new attacking front had a real shot to finally break through after controlling possession while consistently getting to the box.

"Instead of knocking on the door, just kick the door down at this point, go right on through and get what you deserve out of these games," Holly said.

So Nadia Nadim flicked a header and Cheyna Matthews walked the ball into the net in the second half to get a deserved 3-1 win over last-place Kansas City, Racing's first victory since June 26. The three goals, which included Ebony Salmon's fourth of the season in the first half to take an early lead, tied a season high for Louisville.

What a cross from McCaskill and maybe an even better header from Nadim for her first @RacingLouFC goal. pic.twitter.com/bP71K6GZv3

Cheyna Matthews walks one into the net to make it 3-1 @RacingLouFC. She's clearly soaking that one in as her teammates embrace her. pic.twitter.com/v2AEnnrs8r

"The second half, there was an opportunity for them to assert themselves and respond," Holly said. "It's something we could not be prouder of."

Nadim's goal was on the end of Savannah McCaskill's second assist of the match, a cross that came at the last second before going out of bounds. The former Paris Saint-Germain star was ready to respond in the second half of her third Racing appearance.

"Them scoring a goal was really annoying me," Nadim said. "So coming out, I wanted to really be a part of changing the game. And I saw Sav (McCaskill), I know she's capable of serving some really good balls in the box. So I just attacked the ball. I'm happy I got my first goal and I'm happy I helped the team."

"She's someone who doesn't settle for mediocre performances," Holly said of Nadim. "For her to get that first goal, get it off of her back and contribute to the victory is something we're delighted about."

The first club goal for Matthews meant more than just insurance for a victory. She is a mother of two children who just had her second son in December, and this was the first time she found the back of the net since he was born.

"Some people asked if I was even going to continue to play," Matthews said. "And I never had a doubt in my mind. So it was just really special."

McCaskill's performance was certainly special too. The vice captain registered two assists and accounted for half of Racing's 16 crosses.

"She's the heartbeat of this team," Holly said. "Everything goes through her, whether she has a good day or bad day. She's still emptying the tank on that field."

And it's helping fuel an attacking front that's hoping this is the beginning of its breakout. Two additions in Nadim and Salmon have been working with Cece Kizer, McCaskill and Yuki Nagasato to gel better since the club's full roster has been filled. That was on display with the first goal of the game.

McCaskill-Fox-McCaskill-Kizer-McCaskill-Salmon for a 1-0 @RacingLouFC lead. Maybe the best team goal the club has scored this season. pic.twitter.com/k0VcVseSHB

"It's establishing those connections," Holly said. "We want to give them as much freedom and flexibility in terms of how they apply themselves on the field. So to see Sav (McCaskill) connecting with Cece (Kizer) in the way that they did, and to see the runs coming in the box from Ebony (Salmon), it's maybe a little bit of a sign of things coming together."

"I think the last couple of games, we've had the combinations," Nadim said. "I think our understanding is getting better and better. I'm sure it's going to come. One thing I knew before I signed was it was going to take a couple of games for us to really warm up. And I feel like we have a great, talented squad. Once we get running, I think we're going to be even more dangerous."

Twelve games into its inaugural campaign, Racing is 4-6-2 with 14 points, which is next to last in the NWSL, yet five points out of a playoff spot. As the team hopes it's rounding into form for the last half of the season, Nadim is enjoying the progression.

"One of the things that has stood out to me so far has been the heart and desire to work and improve," Nadim said. "I don't want to be a part of a team that's made of prima donnas, the ones who expect to be world champions before the game's even played. I want to be on a team where you grind, build and get better."

"I think we're on that way slowly. I think we're starting to be more dominant within the games with the ball. Decision-making is getting better. And now we just have to start adding up the last 5-10 percent that I know we're capable of. I think after that, it's going to be good."