Broncos QB suffers concussion on last offensive play of first half. Drew Lock has yet to move into FG range against Ravens' pressure. Ravens' QB Jackson heating up. 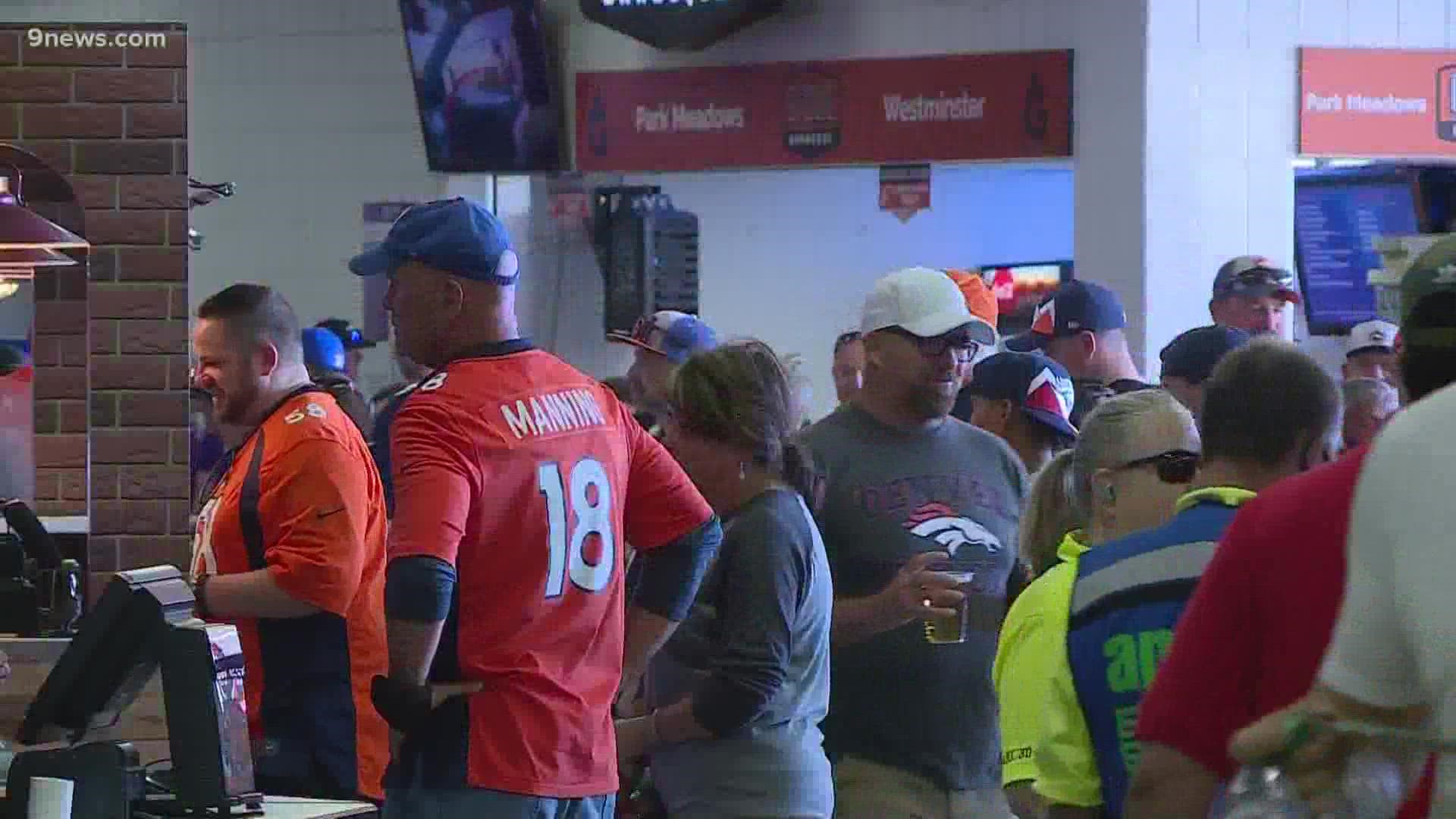 DENVER — Respect from the NFL nation will have to wait.

Baltimore was a Big Boy opponent and the Broncos had a Big Time problem.

For the first time in four games this season, the Broncos lost. Baltimore's superb quarterback Lamar Jackson and a relentless Ravens' defense were too much as the Broncos were handily defeated, 23-7 on an otherwise spectacular early-October Sunday afternoon at Empower Field at Mile High.

Broncos' quarterback Teddy Bridgewater was under constant pressure and was knocked out of the game with a concussion on the final play of the first half. The earliest Bridgewater can be cleared from concussion protocol is Friday or Saturday, with the Broncos playing next Sunday at Pittsburgh.

"I just saw him. He said he's getting better as the day goes on,'' Broncos head coach Vic Fangio said. "So we'll see."

Drew Lock came in and also was under heavy pressure and didn't move the offense into field-goal range until the final 2-minute possession that ended with an interception in the end zone.

Regardless of who was playing quarterback, the Broncos struggled to pass protect against the Ravens' blitzing defense schemed by coordinator Wink Martingdale.

"When we were watching film, we obviously saw that their style, what they do, is to bring pressure,'' Lock said. "And that's exactly what they did. They try to confuse you a little bit, get you in some weird fronts. Make you slide one way, bring it the other. That's just what they are, it's what they do. They're a good defense. They've got guys that can fly around the field. They got a secondary that can lock up if they need to.

"But ultimately in my heart, and everyone's heart in there, it's us that beat ourselves and not that we got beat by someone else. They played well today but we could have played a lot better, too."

A boisterous gathering of 74,132 (less than 2,400 no-shows) showed up on a bright, 76-degree afternoon to see if their Broncos could handle, as their star pass rusher Von Miller said during the week, “a worthy opponent” in the Baltimore Ravens and their great quarterback Jackson.

As the game played out, though, the difference was up front, where Bridgewater, the Broncos’ resurgent quarterback, was constantly under duress while Baltimore’s Jackson had plenty of time to make some impact throws. Lock also struggled with lack of protection in the second half.

"Protection is a lot of people involved with that,'' Fangio said. "The offensive line. The backs. The tight ends when they're asked to pass protect. And the quarterback. It's a multi-faceted operation. And I'm sure we had breakdowns across the board there."

The Broncos’ offense – and their young line – started having problems protecting Bridgewater in the second quarter as Ravens’ defensive coordinator Wink Martindale brought an extra pass rusher that led to Denver’s quarterback throwing as he was hit. Bridgewater was only 7 of 16 for 65 yards at the half. Jackson finished 22 of 37 for 316 yards passing, although he was held to just 23 yards rushing on six carries.

Credit: AP
Baltimore Ravens wide receiver Marquise Brown pulls in a touchdown pass against the Denver Broncos during the first half of an NFL football game, Sunday, Oct. 3, 2021, in Denver. (AP Photo/Jack Dempsey)

Lock was 12 of 21 for only 113 yards with an interception and was sacked three times in the second half. His best play, a scramble right and 22-yard completion to Kendall Hinton, was called back on holding penalty by left tackle Garett Bolles.

"I didn't play too well,'' Bolles said. "I take this loss upon myself."

Later, Bolles was even more self-critical.

"I'm really angry right now at myself,'' he said. "It's just unacceptable the way I played today.''

The Ravens' defense had five sacks.

Both the Broncos and Ravens are 3-1, although Denver's wins were against the 1-3 Giants, 0-4 Jaguars and 1-3 Jets. The Ravens have a win against the Kansas City Chiefs.

It was the NFL starting debut of “The Belly.” The Broncos played this game without their two starting guards, Graham Glasgow and Dalton Risner, who were out with injuries. In their place were Netane Muti and Quinn “The Belly” Meinerz, who entered this game with two NFL starts combined--both by Muti.

At the end of the first quarter, Broncos running backs Melvin Gordon III (4 carries, 33 yards) and Javonte Williams (4 carries, 38 yards) had a combined 8 carries for 71 yards.

The kiddie guard corps was getting some interior push.

Williams got 31 yards on a tremendous, tackle-busting run late in the first quarter. It was scoreless until the Ravens’ Justin Madubuike was flagged for 15 yards following a late hit on Bridgewater, who was well down following a forward-falling scramble.

Then Williams got the ball on the next play. The stocky rookie lowered his shoulder pads to bust through two tackle attempts, then carried Ravens cornerback Marlon Humphrey for a good 20 yards before a gang of Ravens brought him down at the 9-yard line.

"I think on that run he tried to go for the ball instead of trying to tackle me,'' Williams said of Humphrey, son of former Broncos two-time 1,000-yard rusher Bobby Humphrey. "He jumped on my back and I kept running."

After the teams flipped sides for the second quarter, the Broncos on third-and-goal ran a nice combo route with receiver Tim Patrick clearing out two defenders and tight end Noah Fant breaking outside to the open space in the left end zone, where he caught the 3-yard Bridgewater pass for a touchdown. It was 7-0 Broncos.

Williams earned every inch of his 31-yard run. In a move that irked the Broncos, John Harbaugh preserved the Ravens' 100-yard rushing streak by running Jackson instead of taking a knee with 3 seconds remaining and the game well decided. Jackson ran for 5 yards on the final play, giving the Ravens' 102 team yards rushing and extending their 100-yard streak to 43 games, which tied the record set by the great 1974-77 Pittsburgh Steelers' teams of Franco Harris and Rocky Bleier.

Jackson indicated afterward he was surprised he wasn't asked to take a knee.

“I don’t know what he was thinking,'' Jackson said. "I thought we would take a knee and he said, no, we’re going for it. The game was put away. ‘Double-A’ (CB Anthony Averett) caught that pick in the back of the endzone, congratulations to him, but I don’t know what coach was thinking.”

Harbaugh said it was his call.

Still, it wasn't the most sportsmanlike decision. Broncos players were livid about the perceived "rub it in" type maneuver as they walked into their postgame locker room.

After the Bridgewater to Fant score, the Ravens answered on their next possession as the sensational Jackson started finding his groove. First he picked up a third-and-5 near midfield with his legs, then he connected on back-to-back passes to tight end Mark Andrews for 24 and 12 yards.

On first and 10 from the 11, Jackson fed a read option handoff to Latavius Murray, who scampered 11 yards around left end for a touchdown.

On that play, Jackson’s ball handling induced rookie right outside linebacker Jonathon Cooper to crash inside, and with the Broncos’ secondary late in coming up for help, Murray had little trouble reaching the end zone. It was 7-7.

The next Broncos series was thwarted when Bridgewater was sacked on third down. The Ravens answered when Jackson lofted a beautiful deep pass to the end zone where Marquise Brown ran under it for a 49-yard touchdown. Brown sprinted off the right side of the line untouched, then split the Broncos’ two deep safeties, Justin Simmons on the right and Kareem Jackson on the left. Brown was wide open deep in the left side of the end zone. The first-round, third-year receiver, who had some drops last week, made a nice diving catch for the score.

"That was miscommunication with Kareem,'' Simmons said. "There were a couple communication mishaps in the secondary, and with a guy like Lamar who can create and scramble, plays like that can happen. We've got to clean up the communication.''

The Ravens finished the half with a drive that set up a 40-yard field goal by their great kicker Justin Tucker, who added two more field goals in the second half.

Against the Ravens, the Broncos sold out to stop Jackson in the running game and all but dared him to beat them with the pass. They got burned, although holding the Ravens to 23 points is a pretty good day's work.

“I feel like that was the game plan,'' Jackson said. "They were running cover-zero against us, so we went against that. I guess the game-plan worked. I didn’t run that much but we passed for a lot, so we did good.”

Next Sunday, the Broncos play at Pittsburgh, where Ben Roethlisberger and the Steelers are struggling with a 1-3 record.

"We've got to respond,'' Miller said. "We've got a tough Pittsburgh team. They pass the ball. It'll be good to get back to (playing) a normal team that's drop-back pass and hand the ball off. It'll be refreshing to be able to play normal football again.''

There is hope Bridgewater will be able to play. But doctors never like to predict the recovery of concussions, because no two are the same. The protocols are in place and it will be up to an independent neurologist to clear Bridgewater for the plane trip to Pittsburgh.

"I'm going to go about it like I'm going to start this weekend,'' Lock said. "It'd be exciting for me to take reps, get with these guys, get in the swing of things and see what we can do against a good Pittsburgh Steeler team."