Kinley is being required to commission into the Navy as an Ensign unlike those at other service academies who also signed NFL contacts this year. 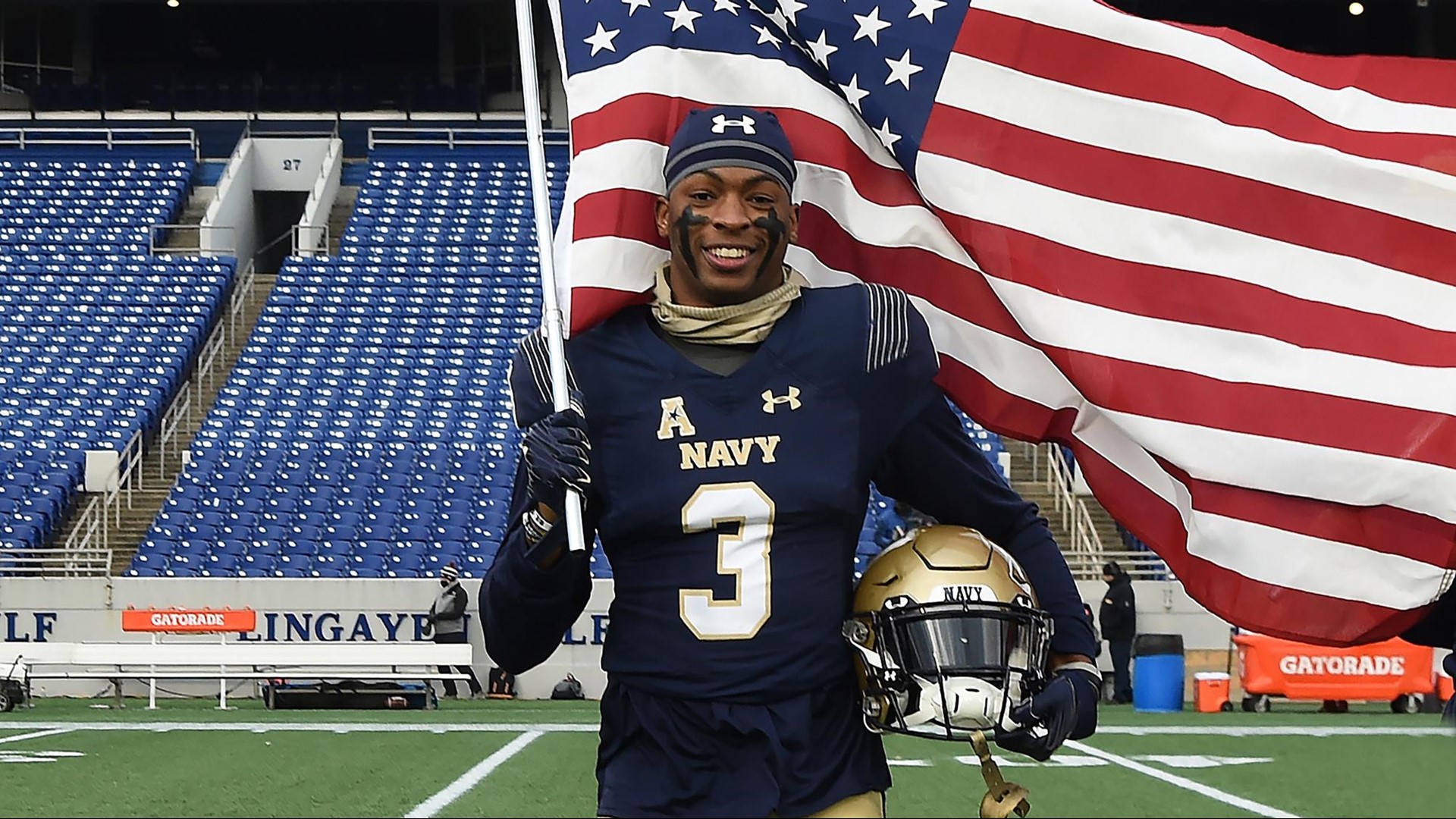 WASHINGTON — Former Navy cornerback Cameron Kinley had his request to delay his military commission to play in the National Football Team (NFL) denied by the U.S. Navy, according to Kinley.

Kinley, who is already an Ensign in the U.S. Navy, is still being required to fulfill his service commitment now. Unlike those at other service academies who also signed NFL contacts this year and have been able to delay some or all duties of their commission.

"This is probably the lowest place I've been in my life," said Kinley. "All the adversity I had to overcome just to get this opportunity to play in the NFL and to be so close and to have somebody take that dream out of your hands, it's tough."

Kinley signed a contract with the Tampa Bay Buccaneers as an undrafted free agent last month.

According to Divine Sports and Entertainment, the agency that represents Kinley, he was approved by the U.S. Navy to participate in rookie minicamp when he has been a standout.

"Due to unexplained reasons, Acting Secretary of the Navy Thomas W. Harker has denied Kinley's request to delay his commission," the agency wrote in a press release.

It also claims Kinley is being denied a fair process and his dream of playing in the NFL by not being given an opportunity to appeal the decision.

Captain Jereal Dorsey, a spokesperson for the Secretary of the Navy, released the following statement in regards to Cameron Kinley:

"Admission to the Naval Academy is an extensive and competitive process. The mission of the Naval Academy is to develop young men and women to commission as officers in the Navy or Marine Corps. When students accept admission and continue their education in this program, there is an understanding and acknowledgment that they will upon graduation be commissioned. Every Midshipman attends on the same terms and each has the same responsibility to serve. Exceptions to that commitment to serve have been rightfully rare. Following discussions with senior Department of Navy leadership and in accordance with existing Department of Defense policy, acting Secretary of the Navy Thomas W. Harker, declined to forward requests from recent Naval Academy graduates to the Secretary of Defense, seeking to delay their commissions."

"As a Naval Academy graduate, football player, and decorated combat veteran I understand Cameron's commitment. I also understand there are ways he can fulfill his commitment while representing the Navy and playing professional sports," Divine Sports and Entertainment Co-Founder Ryan Williams-Jenkins said, in part.

We’re disappointed with the Navy’s decision to deny @ck3thethrill’s request to delay his commission in order to play in the NFL and there is no appeal process at this time. We will continue to advocate on Kinley’s behalf until he receives the fair and equal treatment he deserves. pic.twitter.com/LYfl78MX3S

In response, Kinley wrote a letter to his state Sen. Marsha Blackburn, saying the decision to deny his petition is inconsistent with a memorandum allowing service academy graduates to delay the beginning of their active military service to pursue professional sports.

“I do not know why my request was denied, as I have received no written explanation for this decision," he added.

The cornerback also cites being "puzzled" by four other NFL players, who attended different service academies, being allowed to delay commission.

Kinley released a statement Monday regarding his denial saying he has "spent the past week processing [his] emotions, as it is very difficult to have been this close to achieving a childhood dream and having it taken away."

"I am very aware of the commitment that I made to serve when I first arrived at the United States Naval Academy. I look forward to my career as a naval officer in the information warfare community. However, I am deserving of the opportunity to live out another one of my life-long dreams before fulfilling my service requirement," Kinley wrote, in part.

My personal statement regarding the Navy's denial of my request to delay my service: pic.twitter.com/AsNLEPdF1Z