The announcement comes after head coach Dan McDonnell said he was "beyond frustrated" with the capacity restrictions for home games. 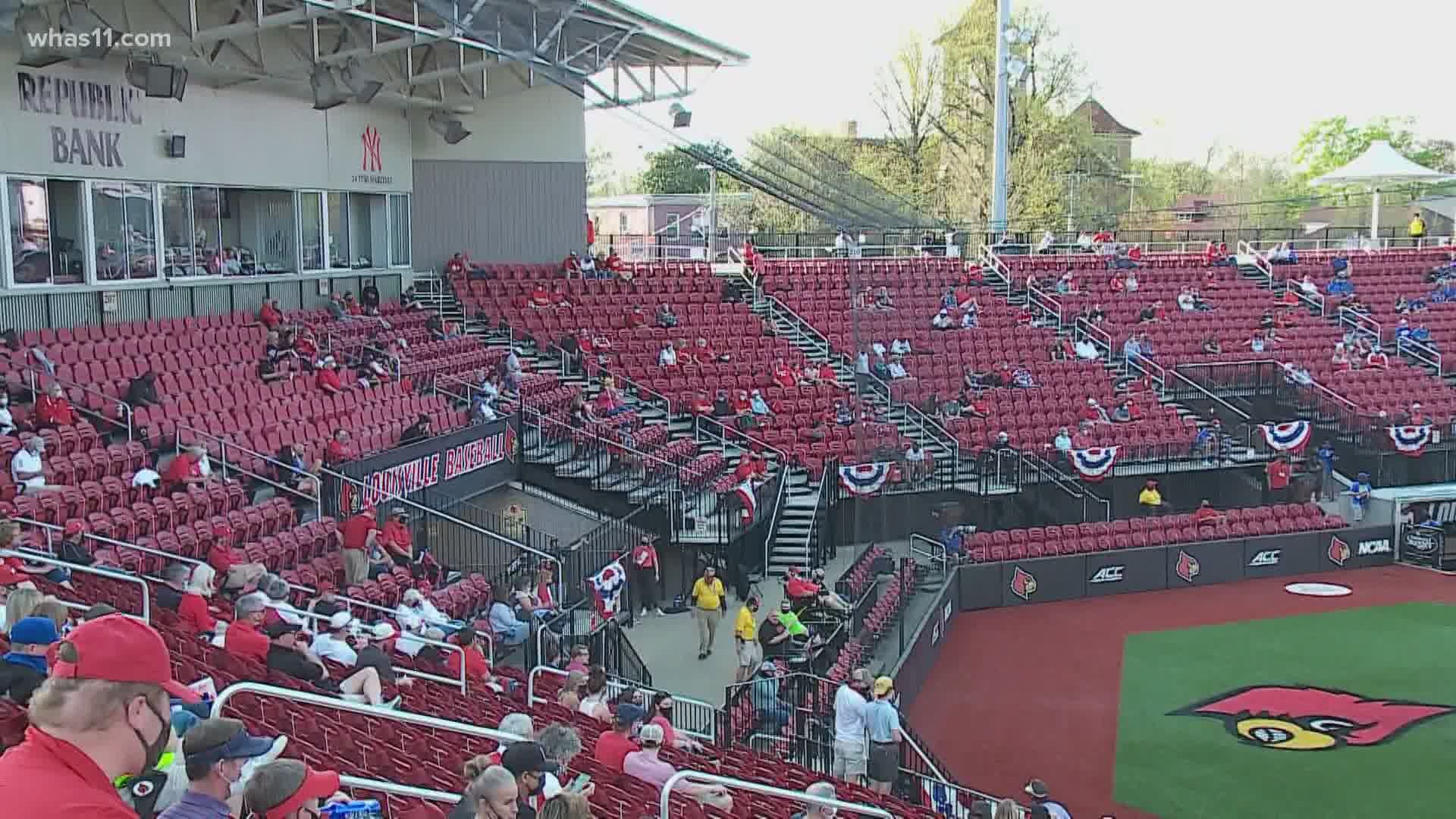 LOUISVILLE, Ky. — According to a release from the University of Louisville (UofL), capacity at Jim Patterson Stadium has expanded to 50% effective immediately.

The stadium has been operating under 20% capacity since the start of the UofL's baseball season in February. Jim Patterson has a capacity of 4,000 people.

Following a win over No. 2 Vanderbilt Tuesday, head coach Dan McDonnell said the win wasn't as exciting since there were not fans in the stands.

"I'm tired of playing games without people in the stands," McDonnell said. "So, let's open it up and let's let our fans come and let's let them enjoy some Louisville baseball, and then I'll be a little more excited to host a regional."

UofL athletics says they worked closely with state and local health officials to update attendance policies as social distancing guidelines have been eased.

The capacity expansion will be in effect beginning with the team's weekend series with the Duke Blue Devils beginning May 7.

Tickets will be made available beginning 1 p.m. Thursday. Season ticket holders will be contacted prior to the public on-sale with additional information regarding ticket opportunities.

Before the announcement, WHAS11 spoke with McDonnell Wednesday afternoon about his call for fans to return.

"I don’t ever want to act like I take the pandemic lightly, our University hasn’t," McDonnell said. "We’ve been very proactive, we’re all about the vaccination...my entire program has been vaccinated."

McDonnell said he was at a boiling point after seeing other sporting events and teams increase capacity.

"We just played down at Clemson, they doubled their capacity over the weekend...and it felt like the old days with crowds and atmosphere and my kids haven’t got to experience much of that this year," he said. "It was just frustrating when it was all over set and done that our fans didn’t get to enjoy it as much as I would like."

McDonnell mentioned incentive ideas like offering coupons or free tickets to encourage people to get vaccinated. He said as much as the coronavirus pandemic had a physical impact, it also had a mental one.

"The one thing about athletics man it takes you away, people want that escape," McDonnell said. "There’s a lot worse things you can escape to but athletics is a pretty healthy escape and it’s a really healthy way to release what’s going on."

Spokesperson for Governor Andy Beshear shared a statement with WHAS11 after McDonnell's interview: "The Governor hopes Coach McDonnell and other leaders will join him in encouraging others to get vaccinated so more people can safely return to activities we enjoy including watching our favorite teams. On April 19, Gov. Beshear increased capacity for outdoor stadiums to 50%, well above what UofL is operating at. Good luck to the baseball team."