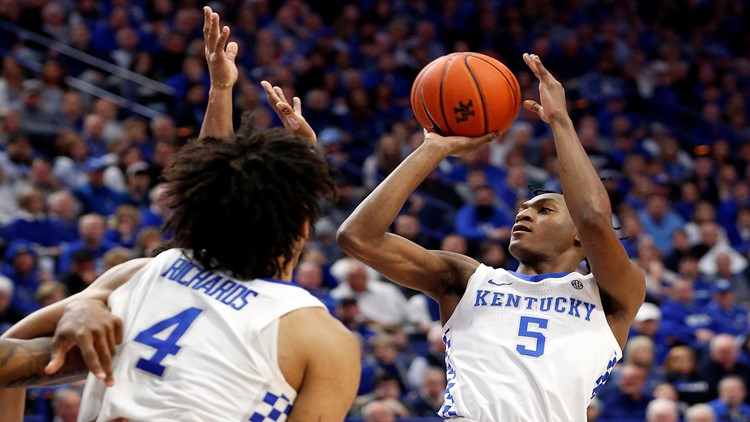 LEXINGTON, Ky. — Nick Richards had 16 points, including two go-ahead free throws 1:11 remaining, and Immanuel Quickley and Keion Brooks each made two more in the closing seconds to help No. 12 Kentucky escape Mississippi 67-62 on Saturday.

The Wildcats (20-5, 10-2 Southeastern Conference) shot just 39% overall but made 48% in the second half to erase a seven-point deficit and create a back-and-forth game for the final eight minutes. Richards followed two free throws with 2:11 left with two more a minute later to put Kentucky up 63-62.

Devontae Shuler then airballed a 3-pointer out of bounds with nine seconds left. Quickley, who had 17 points, was fouled a few seconds later and added two from the line with 6.6 left before Keion Brooks Jr. sealed the win with two more.

Tyrese Maxey had 14 points while EJ Montgomery and Richards combined for 15 rebounds as Kentucky beat the Rebels 41-33 on the glass.

Breein Tyree had 19 points, while Blake Hinson and KJ Buffen each had 13 for Ole Miss (13-12, 4-8), which had won three in a row. The Rebels dropped their 11th consecutive series game to the Wildcats.

Ole Miss: The Rebels shot just 37% before halftime but were lifted by several 3s from Tyree, who had averaged 33.7 points the past three games. The Rebels tried to dribble down for the final shot, but Shuler missed badly from deep and late fouls put Kentucky on the line.

Kentucky: Missed shots hurt the Wildcats in the first half as they went 1 of 13 from deep and 9 of 30 overall (30%). They made just 2 of 22 from long range, but worked the ball inside the arc and especially to the lane, drawing fouls and converting 19 of 24.

Mississippi: Vsits Missouri in the first of two meetings over 15 days. The Rebels host the Tigers on March 4.

Kentucky: Visits LSU on Tuesday in a showdown of SEC leaders.