Fans stormed the field as Kentucky beat Florida at home for the first time since 1986 and took a big step toward challenging Georgia in the East. 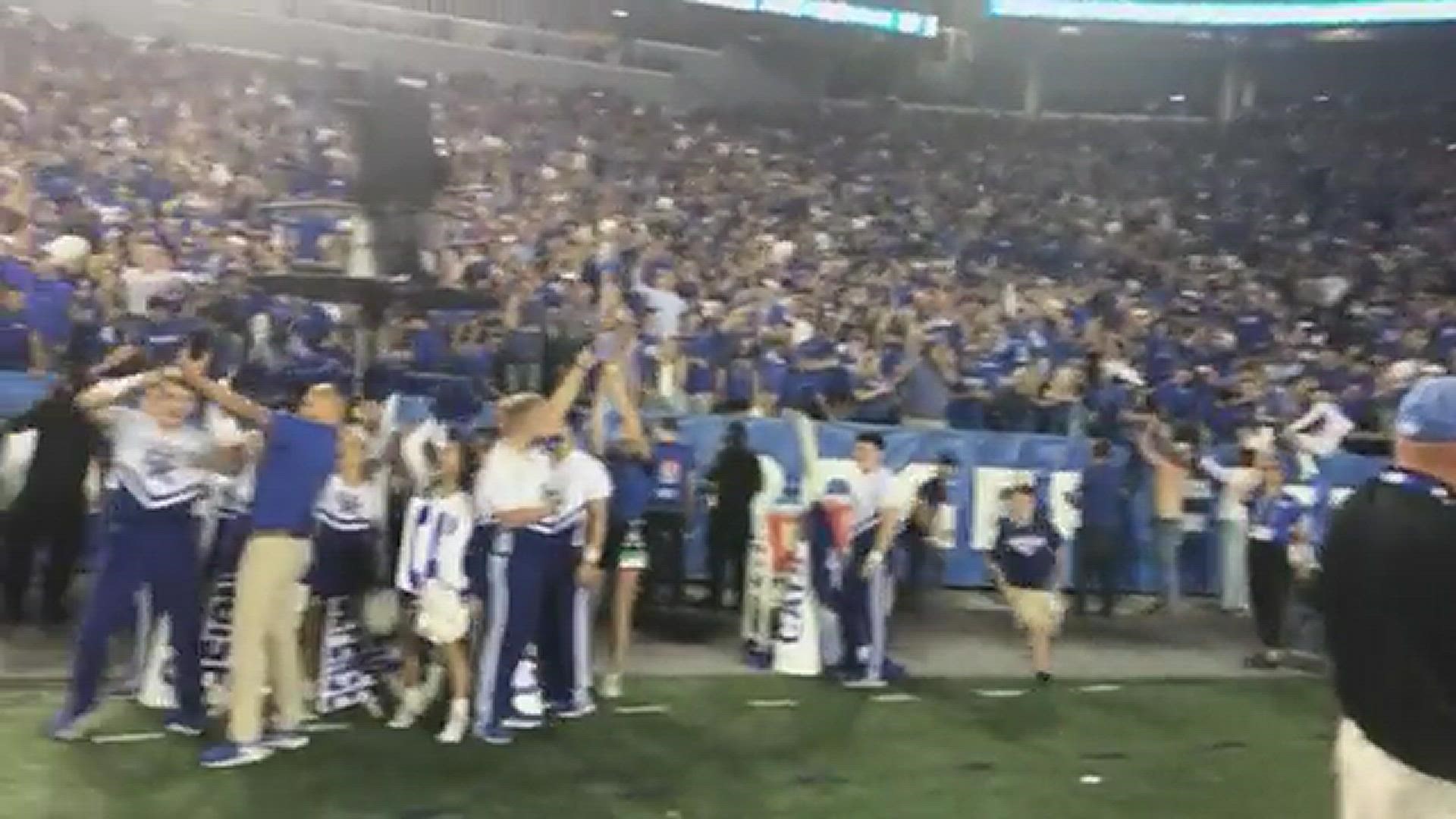 LEXINGTON, Ky. — Trevin Wallace returned a blocked field goal 76 yards for the go-ahead touchdown late in the third quarter, Chris Rodriguez Jr. had a 9-yard scoring run early in the fourth and Kentucky made a final defensive stand to hold off No. 10 Florida 20-13 on Saturday night.

The Southeastern Conference East Division showdown was more of a slog than a slugfest for much of the night, and the Gators (3-2, 1-2) were poised to add Jace Christmann’s 48-yard field goal attempt to their 10-7 lead.

Kentucky defensive end Josh Paschal got a hand on the low kick that sent the ball fluttering the line to Wallace, who jetted past a tackle on the left sideline and cut back through a small seam to race for the game-changing TD.

The Wildcats (5-0, 3-0) turned it over on downs at the Florida 34 to start the fourth quarter but created another opportunity when linebacker J.J. Weaver intercepted Emory Jones’ pass for a first down at the Gators 29. Rodriguez took over from there, rushing three times for 22 yards including the 9-yard TD for a 20-10 cushion with 11:32 remaining.

Florida got within seven on Christmann’s 33-yard field goal with 6:23 left before getting the ball again a couple of minutes later and driving to the Kentucky 5 with the help of a defensive facemask penalty. A 4-yard loss on a pass play and false start penalty moved the Gators back to the 14, but they had a final chance from the 8 before Jacquez Jones swatted away a fourth-down pass with 18 seconds left to seal the win.

Fans stormed the field as Kentucky beat Florida at home for the first time since 1986 and took a big step toward challenging Georgia in the East.

The Wildcats did it despite being outgained 382-211, but got a 41-yard TD pass from Will Levis to Wan’Dale Robinson and 99 yards rushing on 19 carries from Rodriguez.

A slew of false starts comprised many of Florida’s 15 penalties for 115 yards. Jones completed 23 of 31 passes for 203 yards, but the Gators were held way below their average of nearly 541 yards that ranked ninth coming in.

1 / 16
AP
Kentucky linebacker DeAndre Square (5) celebrates after making a tackle during the first half of an NCAA college football game against Florida in Lexington, Ky., Saturday, Oct. 2, 2021. (AP Photo/Michael Clubb)

Florida figures to drop a few slots with its second SEC loss. Kentucky made a strong case for joining the rankings for the first time since its memorable 2018 season.

Florida: The Gators moved the ball with Jones and Anthony Richardson but couldn’t finish other than their first TD. Christmann’s 51 yard field goal provided an edge, but the block and interception dug a hole they couldn’t climb from. The false starts in a loud environment were especially costly in stalling drives.

Kentucky: The Wildcats really had only one sustained drive and committed another yet turnover that nearly cost them until Paschal and Wallace prevented that from happening with a clutch special teams play and TD. Weaver’s pickoff set up an insurance score, a rare takeaway that proved pivotal in a defensive battle.