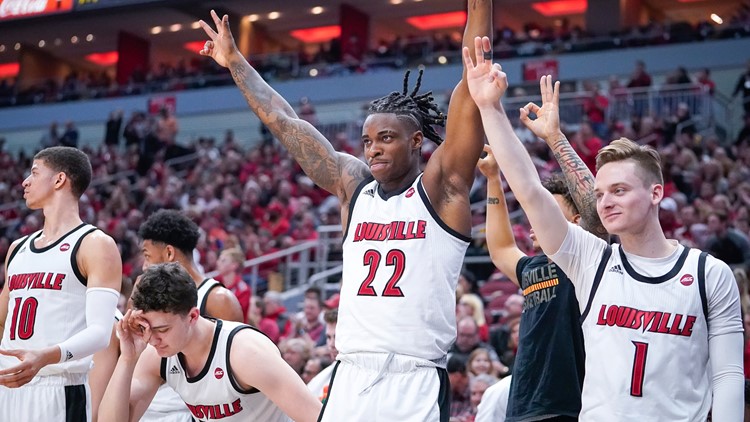 Photo by: AP
The Louisville bench celebrates after a score during the first half of an NCAA college basketball game against Virginia, Saturday, Feb 8, 2020 in Louisville, Ky. (AP Photo/Bryan Woolston)

LOUISVILLE, Ky. — LOUISVILLE, Ky. (AP) — Steven Enoch scored 13 points, including the go-ahead free throws with 2:47 remaining, and David Johnson, Ryan McMahon and Malik Williams combined for eight more from the line to lift No. 5 Louisville past Virginia 80-73 on Saturday for its 10th consecutive victory.

The Cardinals (21-3, 12-1 Atlantic Coast Conference) led most of the way before the Cavaliers stormed back to go ahead 70-68 on Kihei Clark’s two technical free throws with 3:25 left. Johnson’s jumper tied it before Enoch's two free throws put Louisiville ahead for good.

Williams and Johnson each made one from the line before later adding two each to seal a hard-fought victory against Virginia after nine consecutive losses. McMahon sandwiched two in between as Louisville finished 21 of 24 from the line after shooting none in the first half.

Jordan Nwora had four 3-pointers and 22 points for Louisville, which finished shooting 51% despite hitting just 37% in the second half. Williams was 5 of 6 from the line for 11 points including the final two with 11.9 seconds left.

Virginia: The Cavaliers’ defense initially succeeded in pushing Louisville out to the perimeter, but had their hands full accounting for several Cardinals who can shoot. Its shooters began firing in the second half, especially Woldetensae, but frequently put Louisville on the line.

Louisville: Nothing was going to come easy against Virginia, and that showed as the Cardinals couldn't stop Woldetensae from outside. But they didn't wilt and drew fouls that they converted to clear a big mental hurdle.

Virginia hosts Notre Dame on Tuesday night in the only regular season meeting between the schools.

Louisville visits Georgia Tech on Wednesday in pursuit of a season sweep and improve to 7-0 on the road in ACC play. The Cardinals won the previous meeting 68-64 on Jan. 22.