Spurs icon Tim Duncan had aspirations to be an Olympic swimmer before a hurricane changed his future and put him on a path to Springfield, Mass. 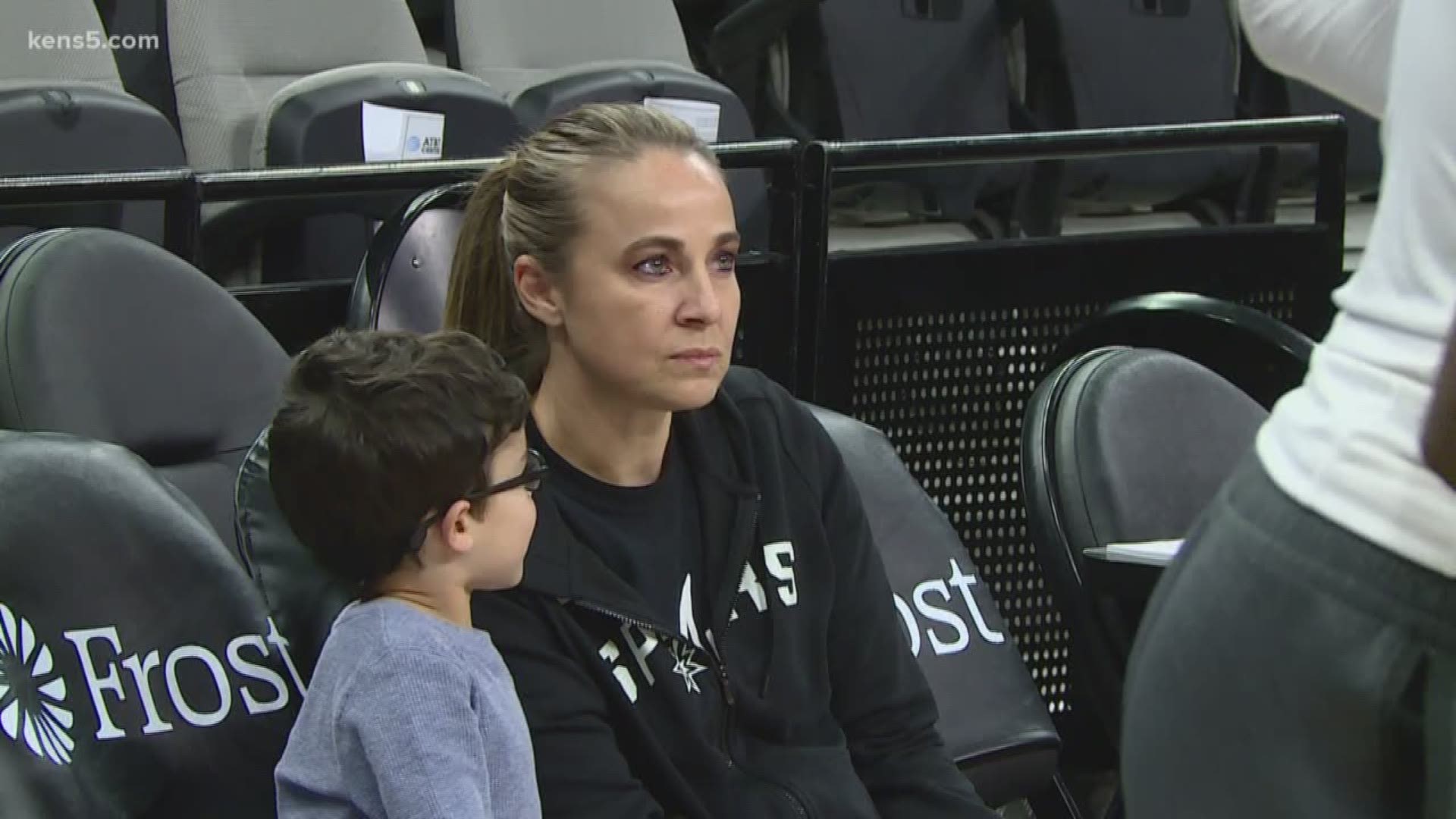 SAN ANTONIO — Editor's note: The above video was originally published on February 14.

The story has become part of NBA lore and required reading for any young fan of Tim Duncan, a finalist for the Naismith Memorial Basketball Hall of Fame's Class of 2020.

For all of his fame on the court, Duncan did not start out to be a basketball player. It just worked out that way.

"Basketball itself began slowly for Tim, but he caught on fire quickly," Dave Odom, Duncan's college coach at Wake Forest, said this week. "It burned all the way until he laid it down the last day with San Antonio."

Before he became a Spur and arguably the greatest power forward in basketball history, Duncan aspired to be an Olympic swimmer like his older sister, Tricia, while growing up on the Caribbean Island of Saint Croix.

But fate took a hand in 1989 when Hurricane Hugo ripped through the U.S. Virgin Islands and destroyed almost everything in its path, including the only Olympic-sized pool in Saint Croix. Then a skinny 13-year-old, Duncan gave up on his Olympic dreams and started playing basketball as a freshman at Christiansted High School in Saint Croix the next year.

The rest, as they say, is history.

Duncan, known affectionately as Timmy by his teammates and Spurs fans, played 19 seasons in the NBA – all with the Silver and Black – before retiring in 2016. A two-time league MVP, he is the only Spur to play on all five of the franchise's five championship teams.

On Saturday, Duncan will be among the greats named to the Naismith Memorial Basketball Hall of Fame's Class of 2020. The class will include two other first-time finalists who are locks: the late Kobe Bryant and Kevin Garnett, both of whom had storied battles against Duncan and the Spurs.

Odom plans to watch the Hall of Fame announcement, scheduled for 11 a.m. on ESPN at home in Winston-Salem, N.C.

"Having an opportunity to coach someone like Tim Duncan comes around only once in a lifetime if you're fortunate," Odom said this week. "It was an honor. It was a privilege, and it's an experience that I'll never, ever forget."

Credit: Wake Forest Athletics
Tim Duncan played four seasons at Wake Forest under coach Dave Odom, and was named college basketball's player of the year as a senior in 1997.

The story of how Duncan wound up at Wake Forest is an interesting tale that bears retelling. For Odom, who still keeps in touch with Duncan, it never gets old.

As fate would have it, Wake Forest forward Chris King, who had been drafted by the Seattle SuperSonics in June 1992, had gone on a barnstorming tour of the Caribbean with a team of NBA draftees that summer before returning to Wake Forest.

Odom has told the story often through the years, but it always comes out the same. A chance conversation with King gave Odom the inside track on the recruiting of Duncan.

"They kind of island-hopped around and did clinics and played with some of the local kids in the Caribbean," Odom recalled. "Sometime around the first of September, I was in my office and Chris King comes walking by. He was back on campus getting ready to go to his first NBA training camp.

"I called him in my office and I just rhetorically asked him, 'You didn't see anybody over there we might be interested in, did you?' He said, 'Coach, there was one kid over there.' I asked him how big he was and he said 'probably 6-8, maybe 175.' I asked him how good he was and he said, 'He was the only guy over there who could stand up to me and Alonzo (Mourning). I'm not saying he could beat us, but he was pretty good.'"

King didn't know the kid's name, but by the next day, Wake Forest assistant coach Larry Davis had pinned down the prospect's identity, phone number, and high school.

And so began Wake Forest's recruitment of Duncan, who was only 16 then and preparing for his senior season at Christiansted High School.

Odom visited Duncan within a month after initially hearing about him, and got the inside track on his recruitment. Duncan committed to Wake Forest in January 1993 and signed with the Atlantic Coast Conference school three months later. He also considered Delaware State, Hartford, and Providence.

That Duncan completed his college eligibility before turning pro made him a rare college athlete even back then. In retrospect, he may be the last franchise player to stay in college for four seasons before going pro.

"Tim's development and his ultimate production, his trek from Saint Croix, to Wake Forest, to San Antonio, to the NBA, it's very difficult to imagine that happening again because Tim didn't have as many options then, and/or distractions, as players do today," Odom said. "He took the best of everything that was available to him and he took it to the max.

"Starting back in the ninth grade when the hurricane came and tore up the swimming pool that he was swimming in every day, with the hopes of someday being an Olympic swimmer, he took advantage of that. How did he do that? He found him a basketball and a basketball court and started getting better there because the pool was no longer an option."

Duncan started at Wake Forest early in his freshman season and never relinquished his spot, improving steadily on both ends of the court each year.

While Duncan never won a national championship in college, the Demon Deacons made the NCAA tournament each season he was on the team, advancing to the Sweet 16 in 1995 and Elite Eight in 1996.

"He was the type of individual, slash, player, that you could never teach him enough, or ever give him enough material to master something," Odom said. "There was always something else he was searching for. I could never throw him enough balls, so he could work on his patented turnaround jump shot off the glass after practice.

"He kept going and going each and every day. He was so different than players who had grown up, by and large, on the mainland, played for their high schools, summertime AAU teams and had been so affected by the Michael Jordans and the Patrick Ewing and Alonzo Mournings. Tim was unaffected by those players."

Nicknamed "The Big Fundamental" by Shaquille O'Neal, Duncan endeared himself to basketball purists with the beautiful simplicity of his game. While other players soared and rattled the rim with thunderous dunks, Duncan consistently wore down opponents with the subtleties of his game.

In short, Duncan embodied the "Spurs Way," as the players called it, with his discipline, commitment to fundamentals and poise.

"With Tim, it was always substance over style," Odom said.

By the end of his junior year at Wake Forest, speculation was rampant that Duncan would skip his senior season and turn pro. But he held steadfast to his goal of graduating.

Duncan had been committed to earning his degree since his mother, Ione, died of cancer on April 24, 1990, a day before his 14th birthday.

"He took something that was most important to his mother, besides her love and caring for her son, and that was she wanted him to graduate from college," Odom said. "From the moment she died until his senior year, he kept that in his heart and in his mind. He didn't talk about it a lot, but it was always there.

"I knew it was there and because I knew it was there, I never feared that he was going to leave until he completed the charge that his mother had given him. That's how he handled that, in ways normal human beings, normal kids his age, would never even think about. But he was different."

Duncan went out with a bang his senior season, earning All-America honors and receiving the John Wooden Award as college basketball's player of the year. A few months later, Duncan was selected by the Spurs with the No. 1 overall pick of the 1997 NBA Draft.

He's traveled a long way, literally and figuratively, since those pick-up games on that outdoor court in Saint Croix so long ago.

RELATED: Adjusting to a life without sports, internationally and locally