How Nate Northington helped break the color barrier in the SEC

'We accomplished what we set out to do,' Northington said. 'It changed the face of football in the south.' 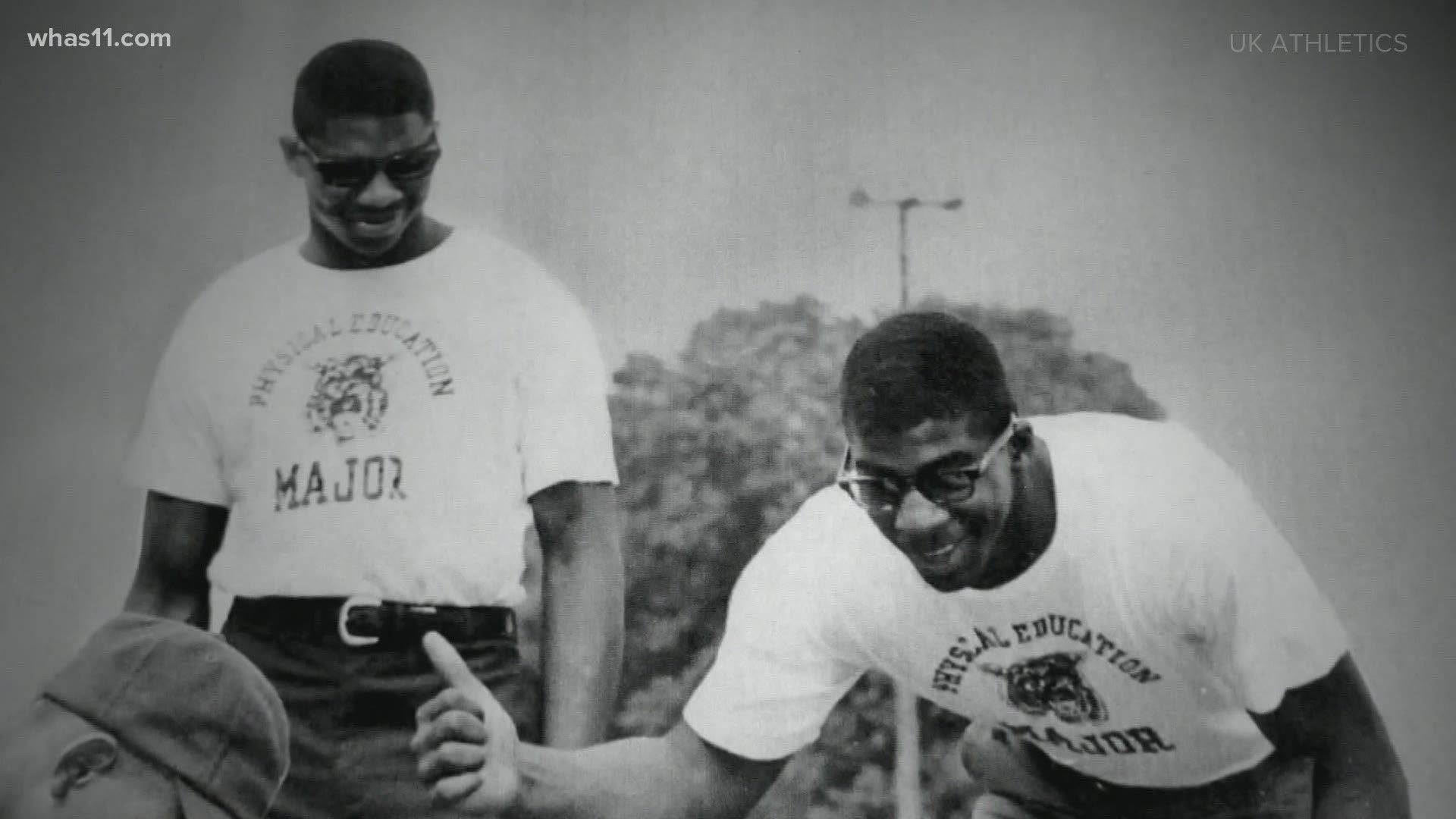 LEXINGTON, Ky. — Louisville native Nate Northington grew up in a fast family. Known for his own speed as a football player, it might have somehow lacked in comparison to his brothers and sisters.

"I might have been the slowest one of them all," Northington said.

That's saying something considering the future University of Kentucky trailblazer grew up running past some around the Newburg neighborhood who would make some history of their own: University of Louisville legends Wes Unseld and Lenny Lyles, as well as the first Black Kentucky Mr. Basketball, Michael Redd. They'd get together and play all kinds of sports on the playground or sandlot.

"Playing football against kids that were four or five years older than me, that didn't bother me," Northington said. "I could run past them."

With a father who idolized Joe Louis and Jim Brown, Northington's confidence came from studying Muhammad Ali. He watched the future heavyweight champion on a local TV show called "Tomorrow's Champions," and was just a few years younger than him.

While not as loud or brash as Cassius Clay, he developed his own silent swagger.

"This may sound cocky," Northington said, "but I've never felt that I wouldn't be successful."

The rising star carried that to Thomas Jefferson High School. Continuing to run just like his dad taught him, following his blockers and cutting off of their blocks, Northington attracted collegiate suitors like Louisville, Purdue and other Big Ten schools interested in giving him a scholarship. Davidson even offered a scholarship to play basketball.

Due to the racial tension of the south and rise of the Civil Rights Movement, he felt he would probably end up playing football at UofL or in the Big Ten, but UK started gaining interest his senior year. He knew the Wildcats had not integrated their football program yet, and one prominent figure wanted to help them with Northington: Kentucky alumnus and former Kentucky governor Edward "Ned" Breathitt.

Credit: Provided by the University of Kentucky

"He invited me and my family to the governor's mansion for Sunday dinner," Northington said. "And I kind of felt like he was going to give me a pitch, because he was committed to integration, social justice and civil rights. I knew Governor Breathitt was a progressive governor and wanted to integrate the football program, along with Dr. (John) Oswald."

Northington knew UK had a good program that could offer him a chance to prepare for his professional football dreams, but something else about the opportunity appealed to him.

"I felt that I wanted to be involved in the Civil Rights Movement," Northington said. "Growing up and watching all the sit-ins, lunch counters and marches, seeing all of those things inspired me to want to be involved in some way. God gave me all the talent and ability. I felt like it was my responsibility to do what he had prepared me over the years to do."

With that desire to bring change, Northington was sold on UK with two assurances from Breathitt: He'd do what he could to protect him and he wasn't going to be the only Black player joining the Wildcat football program.

Greg Page, a defensive end from Middlesboro, wanted to make history too. According to Northington, Page filled out a questionnaire for a scholarship and said he wanted to play at Kentucky so other Black players could play there.

"When you have two people that can get together, it makes a difference," Northington said. "Just being alone by myself may not have done it."

The two players immediately made an impact on the freshman team, which was known as the Kittens. With Page leading the squad in tackles at defensive end and Northington leading it in rushing at running back, while also playing defensive back, they fueled each other.

"If I made a good play, he would always laugh and say 'Nat, you're so lucky," Northington recalled from Page with a laugh. "I would tell him, 'That's not luck, Greg. It's skill.'"

Credit: Provided by the University of Kentucky
Greg Page played defensive end for UK, a pioneer of the integration of SEC football

Off of the field, the two became very close, with Page’s outgoing nature being the yin to Northington’s reserved yang. They roomed together and formed a brotherly bond as young Black men who were dealing with numerous racial challenges.

"We were there to support each other," Northington said. "We could talk to one another about different issues and civil rights, what was going on the football field."

"They were tight, mainly because the only way you survive is because you have to have someone you can relate to," said Wilbur Hackett, who followed Northington and Page in 1967 with Houston Hogg. "You take the lynchings, you take the segregation, you take being called everything but the child of God when you walk on the field, all of that started to play on us."

It would weigh even heavier when tragedy struck in 1967. Northington and Page were expected to become varsity stars until a pursuit drill saw Page get hit in the back in an August preseason practice.

"They called us all together about three-fourths of the way through practice," Northington remembered. "I knew at the time it was very, very serious because they wouldn't have called us over."

"Greg's injury was devastating to all of us," Northington said. "Very, very traumatic."

He was paralyzed from the neck down for 38 days. At first, no one was allowed to go see him in the hospital. But eventually, Page asked Northington to come by.

"I think he was concerned about me and how I was doing," Northington said. "He was still upbeat, felt like everything was going to be okay."

The night before Northington and Page were scheduled to break the SEC color barrier together against Ole Miss, Page passed away.

"He literally gave his life to integrate football," Northington said.

"Football was secondary to me after what happened to Greg," Hackett said. "My primary thing was to survive every day."

Northington said the coaches wanted to call off the game against the Rebels. But the Wildcats were encouraged by Page's parents to do it, who said that's what Page would've wanted. Northington did what he and his friend had set out to do, making history as the first Black player to play in an SEC game.

"It was difficult to actually go out there," Northington said. "We knew we had to do it for Greg. We accomplished what we had to accomplish."

But history only lasted for three minutes in the game. Northington, playing defensive back, hurt the left shoulder he had already dislocated during his freshman season. It affected him for the rest of the year, not allowing him to be himself on the field.

“To not be able to perform to your capabilities, you know you can do it, but you just can’t because of the injury,” Northington said.

And losing his closest friend couldn't allow him to be himself off of the field either. With his roommate gone, the sophomore lived on his own and didn't see much of anyone else. He was isolated and overwhelmed with grief.

It became worse when the Wildcat coaches decided to punish him for falling behind in school.

"They took his meal tickets," Hackett said. "They didn't counsel him. He had nothing but his family and faith."

"If that took place today, there would be some type of counseling," Northington said. "Not just for myself, but for the whole team."

"They didn't know what to do and we didn't either," Hackett said, criticizing head coach Charlie Bradshaw. "You go to a funeral to bury a teammate and after we got back from Middlesboro, we go out and have a three-to-four hour practice. That's just so insensitive and inhumane."

"I'm not a person that really talks a lot or lets a lot out," Northington said. "The pressure just kind of built and built."

It led to Northington meeting with the three other Black players on the team: Hackett, Hogg and Albert Johnson. He informed the trio he'd be leaving UK.

"He said, 'I just can't take it anymore, they're not treating me right,'" Hackett said. "And Nate never badmouthed anybody. But the biggest thing about that meeting was him saying, 'Guys, y'all got to see this thing through.'"

"They should stay and continue what Greg and I began," Northington recalled.

Hackett said he and Hogg had their bags packed multiple times to leave, but the two went on to become three-year lettermen, with Hackett becoming the first Black captain in any sport in the SEC.

"The reason Houston and I made it was for Greg's memory and for Nate's wisdom," Hackett said.

Northington took that wisdom to Western Kentucky. As a transfer, he had to sit out a year. So he worked on an assembly line and got married. But he enjoyed the friends he got to reconnect with at WKU, and what he described as a more diverse student population.

"It was totally different," Northington said. "The pressure, everything that I had been through, I think I got better perspective and everything."

He helped the Hilltoppers win the Ohio Valley Conference as a senior running back. His brother Ken would later go on to play for Kentucky and Nate would go to watch. But it took the older Northington a while to fully share his story.

"Sports Illustrated and some other commentators would want to come do a story about UK and an integrated SEC," Hackett said. "Nate wouldn't talk about it because he was still grieving from Greg's passing."

The soft-spoken Northington also did not appreciate how some of his story was covered when it was happening. One newspaper headline at the time said he had "quit" the UK football team.

But with encouragement from friends and the desire to have the story written down for his grandkids to read, Northington eventually authored an autobiography called, "Still Running: The Autobiography of Kentucky's Nate Northington, the First African-American Football Player in the Southeastern Conference." He also reunited with some of his former teammates, as shown in the documentary, "Black in Blue."

"The older I get, I realize the tremendous impact of the story itself," Northington said. "I didn't really appreciate how much it meant. I appreciate more about what we did."

1 / 7
Nate Northington
The University of Kentucky honored the four pioneers who broke the color barrier in the SEC with a statue outside Kroger Field.

He can see the legacy of it now standing outside of Kroger Field. There, UK built a statue featuring Hackett, Hogg, Northington and Page to honor the historic difference they made.

"We accomplished what we set out to do," Northington said. "It changed the face of football in the south."