The international star sees a chance to build with the new club while continuing to be involved off of the field as a medical student and humanitarian. 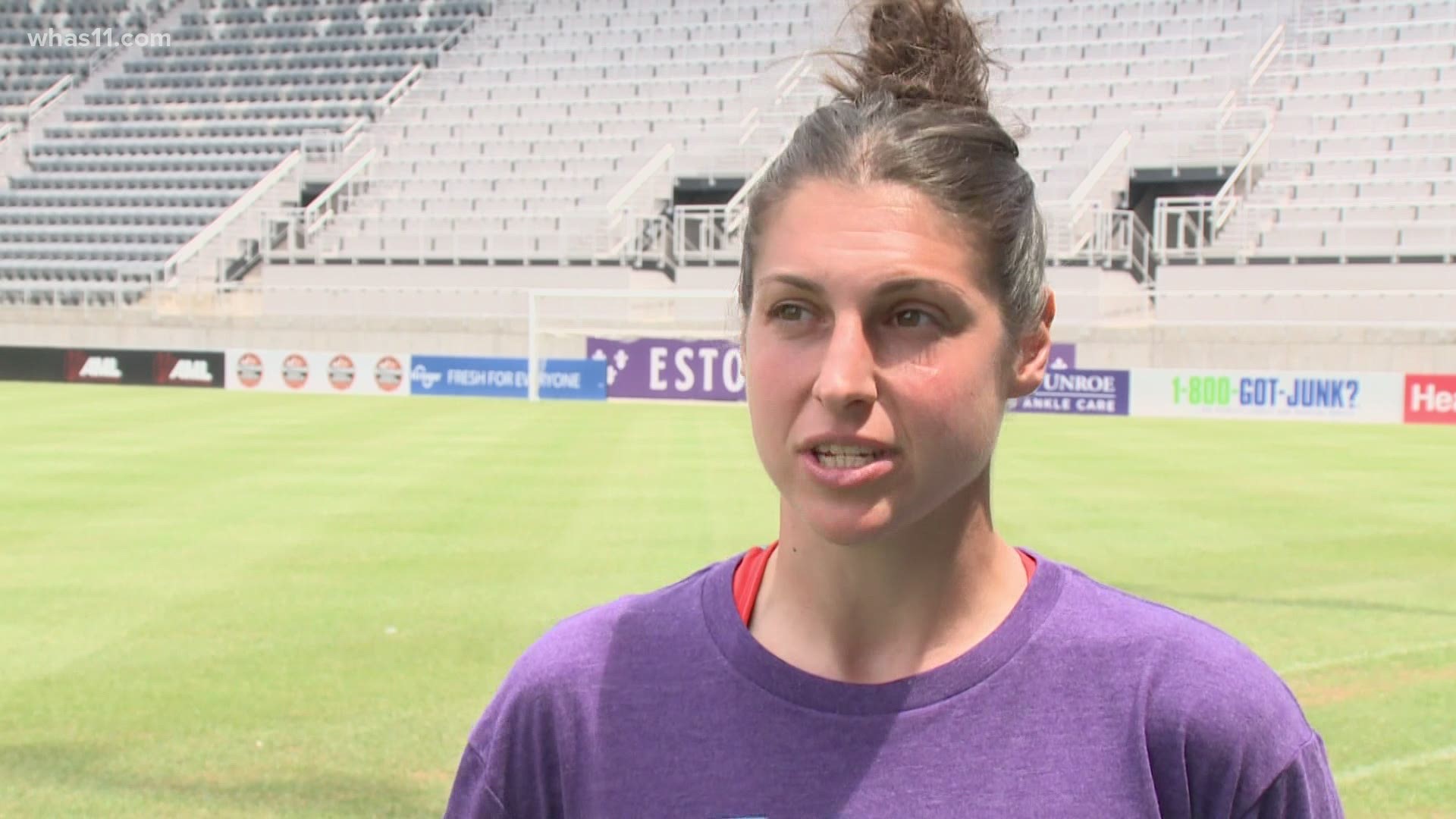 LOUISVILLE, Ky. — As new forward Nadia Nadim adjusts to a new club in Racing Louisville FC, a couple things stand out about the city of Louisville.

"The heat and the humidity," Nadim said. "I knew it was going be hot, but I didn't know it was going to be this humid. And secondly, all of these trucks on the street."

Louisville is the third American city Nadim has played for, and the closest she's felt to actually playing in the United States, describing a prior stop like Portland as having a more European feel. But the driving force behind an international star of her stature joining an NWSL expansion club goes beyond her love of big cars: the 33-year-old wanted a challenge.

"You want to be a part of starting from scratch and writing history," Nadim said. "The club has something fitting my ambitions. I love being in areas where you're the underdogs and you want to create something. Coming in as a new club, I know the beginning is always hard, and that's where I want to be."

She was supposed to join the club earlier this season, but cited visa and COVID issues for pushing her arrival back. Now that the goal-scorer is training with the team, Racing head coach Christy Holly said the former Paris Saint-Germain star will be available for selection for Sunday's match against the Washington Spirit, but does not know in what capacity yet.

"She just came off a long season in France with a great run the Champions League," Holly said. "We do have to be very particular and careful about how we blend her into the club from a physical standpoint, but yeah, you'll see her on the squad this week. She may start, she may come off the bench. We'll see how the week goes."

Via a @RacingLouFC Instagram story: Nadia Nadim takes the training pitch with her new team. She will speak with the media around 11:15-11:30 this morning. pic.twitter.com/oLGurknHD2

Nadim, whose deal with Racing runs through 2023, has also cited Holly as another reason she came to Louisville. The two worked together at Sky Blue FC from 2014-2015. He sees her veteran presence as a valuable one for more versatile looks on the field, but also an impactful one for a team filled with younger players.

"I'm sure you can just tell through the conversations that she's motivated by different things," Holly said. "She holds very high standards and having her in the locker room is an absolute pleasure. Players gravitate towards her. She garners the respect of the players, not only because of her past as a person and what she's overcome, but also the way that her career played out."

The forward just helped PSG win its first Division 1 Féminine title in France, scoring 10 goals and tallying four assists for the season. In the NWSL, she led the Portland Thorns with nine goals in 2016 to help the club take the league shield. And the Afghan refugee who fled to Denmark as a child with her family is also a two-time Danish Soccer Player of the Year.

"I've had an amazing career, but I'm really eager and hungry to achieve more, and become a better player," Nadim said. "And the day I don't feel that way, I don't want to play. This hunger that I have makes me wake up really early, be the first on the field and the last off of it."

That early start is also due to a loaded schedule off of the field. The Aarhus University medical student is one semester away from graduation, hoping to become Dr. Nadim and specialize in reconstructive surgery once she's done playing. Nadim plans to start a clinic with her siblings.

"I want to make an impact and help people change the world," Nadim said. "I know that sounds really big, but I think it can start in local areas. I want to help people make a difference."

Holly remembers her working her way through a thousand-page medical journal on the road trip back from a loss when they were with Sky Blue FC.

"Nadia's way of doing this is very different," Holly said. "I mean, at seven o'clock in the morning, we're sitting and having breakfast with her as she's doing her thesis for her schoolwork. She opened up a paper she's reading, which is the cultural indicators and organizational innovation in Scandinavia. And you've got a professional soccer player doing that. That's the level of intelligence behind this person. That's the level of intent behind everything she does."

That extends beyond medicine as well. Nadim, who fled to Denmark through Pakistan with her family after the Taliban murdered her father, is an international ambassador for women's soccer. The role has included work for the United Nations and humanitarian efforts to bring sports to refugee camps around the world. In the future, she sees herself working in an outreach type of role for FIFA or UEFA.

"I know this game is amazing," Nadim said. "And it has helped me tremendously. It's my life and it really has taught me a lot. But I feel, unfortunately, there's a lot of kids around the world who don't have that access."

Nadim is as busy off the field than on it. She's a medical student and ambassador for soccer, which she's thankful for and wants to spread.

"I feel, unfortunately, there's a lot of kids around the world who don't have that access. So that's also going to be one of my missions." pic.twitter.com/NCgF0Bz44c

"In a world where we are so easy to judge and have certain opinions about about certain people, tell them that listen, if you give people a second chance, everything is possible," Nadim said. "If I never got a second chance, imagine what I would have been."

Now, a new chance awaits. And a star has a shot to make an impact while helping build something new.