The 105th Running of the Indianapolis 500 got underway with about 135,000 fans filling the stands. 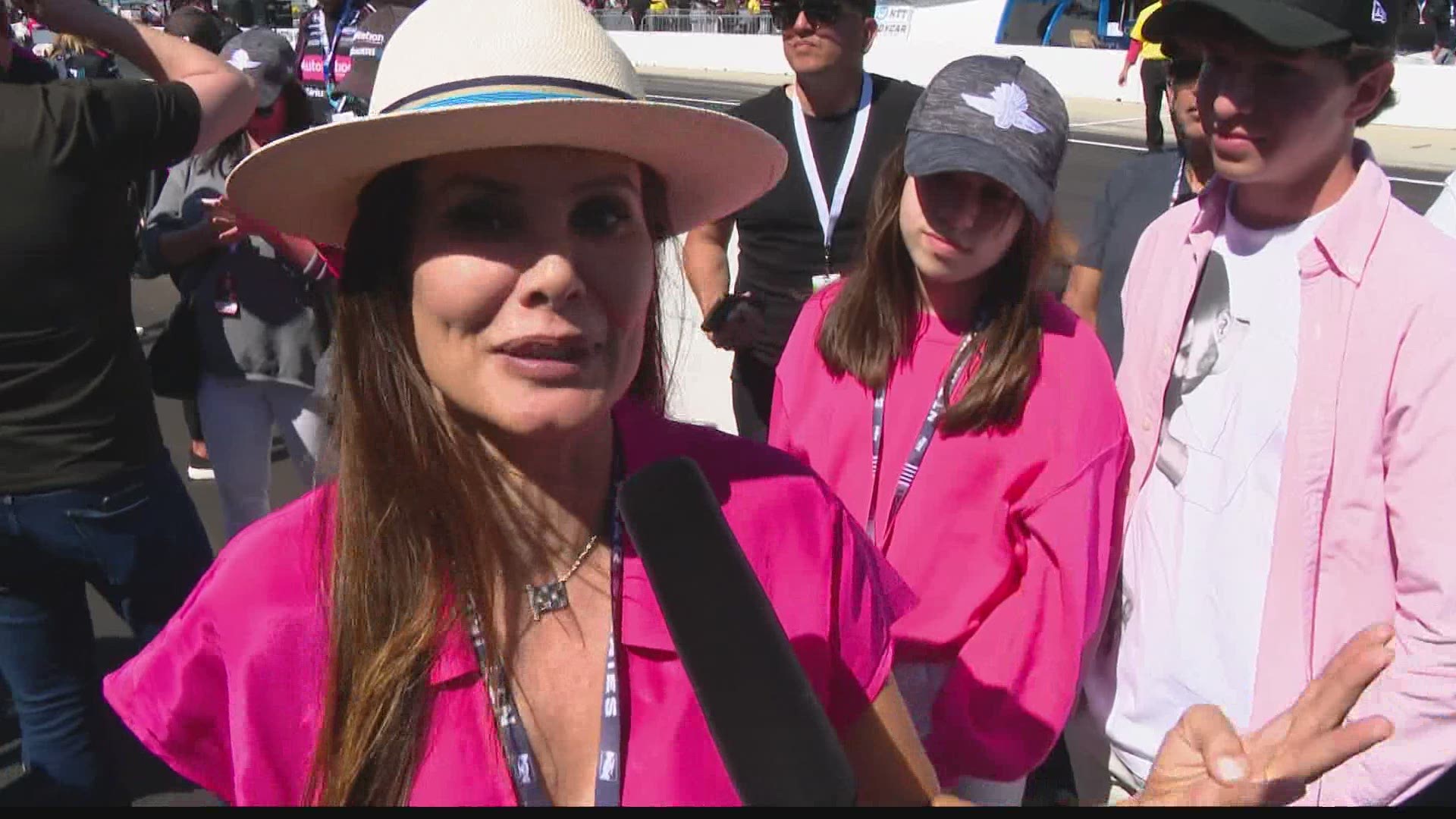 SPEEDWAY, Ind. — Follow along throughout the race with our 13News team as we cover the 105th Running of the Indianapolis 500. Around 135,000 fans are in the stands for what will be the largest sports event since the start of the pandemic.

RELATED: 'This Is Us' star Milo Ventimiglia is ready to wave the green flag at the Indy 500 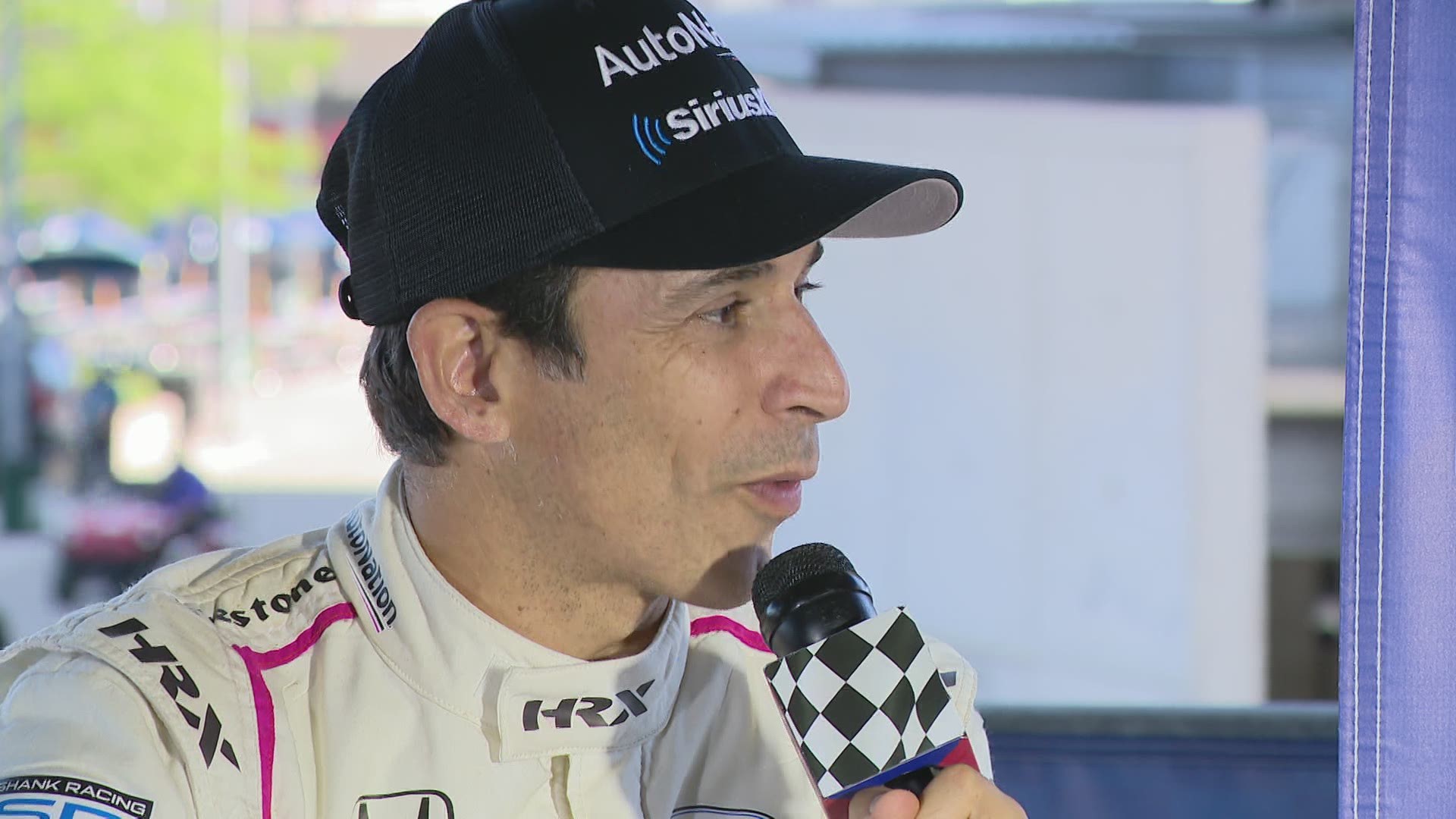 There are now four drivers in the four-time #Indy500 winners club.

The greatest kiss there is in all of motorsports.@H3LIO kisses the yard of bricks at @IMS for the FOURTH TIME! #Indy500 pic.twitter.com/tLQiBHqrC1

They say you always remember your first kiss, but we don’t think @h3lio won’t forget his second, third, or fourth.#ThisIsMay | #Indy500 pic.twitter.com/xdXiB40rvx

4:21 p.m. – Hélio Castroneves has started something.

The fans are CLIMBING THE FENCE! #Indy500

What a day at @IMS as the Spiderman @H3LIO Castroneves won his fourth Indianapolis 500. pic.twitter.com/MC2F6nklUJ

4:16 p.m. – This is what Castroneves was shouting to fans thanks to great positioning by 13News Chief Photographer Matt Whisner.

As @H3LIO is paraded around @IMS, post-race coverage of the #Indy500 continues on NBCSN! pic.twitter.com/d7QMghUMwg

3:58 p.m. – Respect for the four-time winner from fellow drivers and past winners.

The fourth glass tastes the best 🥛

MILKING EVERY MOMENT.@H3LIO celebrates his fourth #Indy500 with milk...then swaps in some strawberry milk to match the fire suit! pic.twitter.com/rFihTuDxWB

3:43 p.m. – "I love Indianapolis. You don't understand, the fans they give me energy," Castroneves said. "This is absolutely incredible."

"The fans. They give me energy!"@H3LIO LOVES INDIANAPOLIS. #INDY500 // @IMS pic.twitter.com/TlZLolIbEg

3:33 p.m. – How does Castroneves celebrate a win? By climbing the fence of course.

The emotion is as real as the win.

RETWEET TO CONGRATULATE @H3LIO CASTRONEVES ON HIS FOURTH #INDY500 WIN!

Only three other drivers have won the Indianapolis 500 four times: A. J. Foyt, Al Unser, and Rick Mears.

It's history for @H3lio as he ties the record for most Indy 500 victories. #IndyCar https://t.co/1YTRHobRQA

3:11 p.m. – Palou moves in front of Castroneves and they're running 5 and 6 as leading drivers start pitting.

3:00 p.m. –The field has cycled through and Palou is sitting in the lead followed by Castroneves and O'Ward.

Graham Rahal just tweeted that is he is heartbroken but is pulling for teammate Takuma Sato.

Let’s go @TakumaSatoRacer!!! Our 15 team is heartbroken, but an @RLLracing win would help greatly. This is hurting even more knowing i was the only one good in only one more stop, all of these guys needed 2. WE HAD THEM! 🤷🏻‍♂️ Thank you all for your well wishes, I am ok.

Credit: AP Photo/Rob Baker
Graham Rahal hits the wall in Turn 2 after losing a tire during the Indianapolis 500 auto race at Indianapolis Motor Speedway in Indianapolis, Sunday, May 30, 2021.

2:52 p.m. – Will Power goes backwards on pit row and will be working from way back. Power is saying he didn't have any brake pressure.

The 2018 #Indy500 winner Will Power was pushed backwards.

He's currently last of the drivers still in the running. pic.twitter.com/jQwN6rCybD

2:46 p.m. – The leaders are starting to hit the pits. Others are working on saving fuel and pushing to only make one more stop.

2:35 p.m. – Here's Graham Rahal on losing that rear tire and crashing out. "Today I thought we had them."

After his day ended early, @GrahamRahal spoke with @lindythackston outside the Infield Medical Center.

2:33 p.m. – The green is back out and O'Ward is leading with Castroneves, Palou, VeeKay and Newgarden following.

2:27 p.m. – Dixon is back on the lead lap after falling a lap down with pit issues earlier. Rossi is still a lap down.

2:21 p.m. – Graham Rahal crashes coming out of pit row. It appears his left rear tire was not locked on and came off the car as he prepared to come back out on track.

Graham Rahal loses a wheel and hits the wall in the #Indy500.

The wheel then hits Conor Daly's aeroscreen, but Daly is able to continue. TV: @NBC. pic.twitter.com/dIeS5zg5qt

Hate it for Graham Rahal. He’s had so much momentum this season. 4 top 10s. Has come so close to winning here before. Had the car to get it done this year. Told me earlier this week he felt it was one of his best shots ever.

2:15 p.m. – Scott McLaughlin locks it up in the pits and gets a speed penalty.

Scott McLaughlin locks it up!

2:11 p.m. – Daly and VeeKay pit to fuel up as they look at only a couple more pit stops. Fuel economy becomes the key strategy of the day.

With approximately 135,000 fans at @IMS in attendance, this is the largest crowd in any sporting event since the start of the pandemic. #Indy500 pic.twitter.com/dHqjy6qpkU

RT if you wouldn't be surprised if he took a selfie as the #Indy500 race leader.

THE CROWD GOES WILD as Conor Daly passes Rinus Veekay for the lead in the 105th running of the Indianapolis 500! Indy native putting on a little show in his hometown.

1:30 p.m. – Kanaan is at the back and Chilton also got a penalty as the field goes back under green.

1:25 p.m. – Stefan Wilson checked out and OK and talking about what happened in the pits.

A disappointing day for @stef_wilson as he is out of the #Indy500 early.@katie_kiel caught up with the @FollowAndretti driver after he was checked and cleared from the infield medical center.

1:24 p.m. – Both Dixon and Rossi head back into the pits and top off the tanks under yellow.

Watch as Rossi gestures to Dixon he'd like to move his way through the field, and watch the #Indy500 on @NBC: https://t.co/5zfe5cDg3B pic.twitter.com/HLEgVlC5Kd

1:15 p.m. – Scott Dixon had issues in the pits. The team opening the engine cover and finally getting it back started. He's lost a lap and will likely have to come back in for more fuel.

Alexander Rossi also had trouble restarting his car and is down a lap as well.

The pole sitter is running into issues early.

Can @scottdixon9 find a way to recover?

1:11 p.m. – Stefan Wilson lost it coming into the pits and crashed. His day is already over. We're under caution.

His hopes of becoming an #Indy500 winner are gone. Tune in now to @NBC: https://t.co/5zfe5cDg3B pic.twitter.com/30YTzeex6I

12:58 p.m. – At 17 laps in, here's the first five: VeeKay, Herta, Dixon, Carpenter and Castroneves takes the fifth spot from Kanaan.

The view in Turn 1 of today’s #Indy500 presented by @GainbridgeLife green flag.

1 / 7
WTHR/Camille Hayes
JR Hildebrand's team gets his car ready for for the 105th Indianapolis 500.

It's a great day for a flyover.

'@JimmieAllen performs the National Anthem ahead of the 105th #Indy500 on @NBC. pic.twitter.com/0p91bHc3e0

12:23 p.m. – Not only is David Letterman a local legend and team owner, he is also a great ambassador for the Indianapolis 500.

David @Letterman has always been passionate about motorsports.@RutledgeWood caught up with the late night talk show star, and defending #Indy500 winner co-owner of @RLLRacing. pic.twitter.com/9afzVArlbx

12:21 p.m. – The 38th Infantry Division Band of the Indiana Army National Guard played "Taps" ahead of the 105th Running of the Indianapolis 500.

On this #MemorialDay weekend, we honor the fallen with the playing of Taps at @IMS. #Indy500 pic.twitter.com/dl1vLvS0fj

Less than half full looks more than half awesome at @IMS. @WTHRcom #Indy500 pic.twitter.com/CRKqLLu3P9

1 / 16
WTHR/Camille Hayes
After a delayed 2020 Indy 500 went off without any fans in the stands, IMS was happy to welcome back a limited capacity crowd for the race.

12:15 p.m. – Some race fans took the opportunity to get vaccinated against COVID-19 at the track ahead of the race.

While we can't wait for racing to start at #IMS today, the race to defeat #COVID19 has already begun.

Get your vaccine today at the Racing Capital of the World!

For more information on the vaccines or with planning your shot, click here.

12:10 p.m. – Indy 500 winner Takuma Sato got the standing ovation he deserved after winning in a quiet Indianapolis Motor Speedway with no fans August of 2020.

Credit: AP Photo/Darron Cummings
WWE wrestler Titus O'Neil takes a photo of the crowd before the start of the Indianapolis 500 auto race at Indianapolis Motor Speedway in Indianapolis, Sunday, May 30, 2021.

12:05 p.m. –  "This Is Us" Actor Milo Ventimiglia walking up to get ready to wave the green flag to start today's race.

With the green flag in hand, @MiloVentimiglia is making his walk through the grid.

Temps are warming into the low 60s, as the driver introductions are taking place for the #indy500 at @IMS ! @wthrcom pic.twitter.com/XRdMLzyNJt

12:00 p.m. – Check it out. The drivers are all ready and we are only about a half hour from the start of the race.

An emotional moment at @IMS.

Largest sporting event since the pandemic began. This is what grateful looks and feels like. pic.twitter.com/sLoe416PuB