LOS ANGELES (USA TODAY Sports) -- One day after the longest postseason game in Major League Baseball history, the Boston Red Sox and Los Angeles Dodgers offenses needed five and a half innings to wake up on Saturday. Once they did, the Red Sox fought back from a four-run deficit and rallied for four ninth-inning runs to take an 9-6 win and a 3-1 advantage in the series.

Both Dodgers starter Rich Hill and the Red Sox’s Eduardo Rodriguez opened with five shutout innings. Hill added a scoreless sixth, but Rodriguez finally faltered in the bottom half of the frame.

With help from a throwing error by Boston catcher Christian Vazquez and a long three-run homer by Yasiel Puig, the Dodgers opened up a four-run lead in the sixth. But Boston battled back, chasing Hill with one out in the seventh and drawing the game close on a three-run blast off the bat of Mitch Moreland. A solo homer by Steve Pearce off Kenley Jansen tied the game in the eighth.

Facing Dylan Floro in the ninth, Brock Holt hit a one-out squib double to the opposite field and scored on a Rafael Devers single up the middle to give the Red Sox a lead. Steve Pearce's bases-loaded double later in the inning put the game away for Boston. 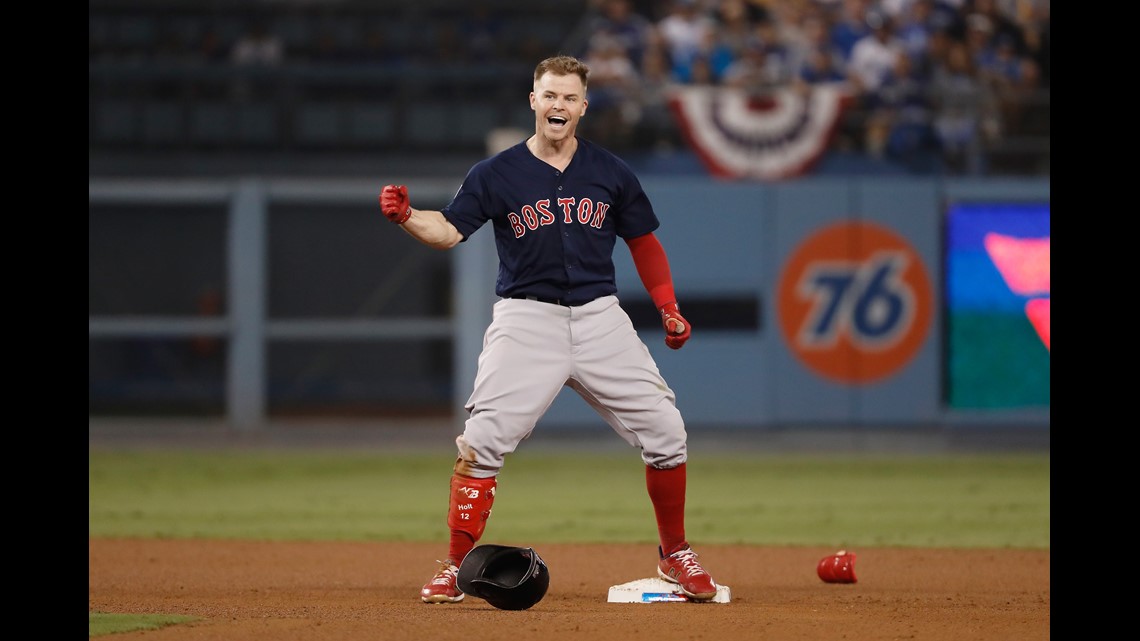 Though Devers’ ninth-inning hit would drive in the game’s winning run, it was Moreland’s monster homer in the seventh that seemed to swing the momentum in the game. Pinch-hitting against righty Ryan Madson, Moreland got a first-pitch changeup up in the zone and clobbered it 437 feet into the right-field grandstand.

Man of the moment

Rodriguez’s final pitching line isn’t terribly pretty: The 25-year-old allowed four earned runs in 5 ⅔ innings and left with the Dodgers leading. But considering the circumstances, his was a gutsy performance. Though he only threw six pitches on Friday, Rodriguez was working on zero days’ rest Saturday for a club that desperately needed him to provide a starter’s workload. He did that, and pitched well enough to keep the game close for a Boston comeback.

State of the Red Sox

Both clubs will turn to their aces for Sunday’s Game 5. Chris Sale will take the ball for the Red Sox as they look to avoid getting swept in the Los Angeles leg of the World Series. Sale last pitched in Game 1, when he allowed three earned runs in four innings pitched with seven strikeouts. The 29-year-old lefty, who spent a night in the hospital with a stomach ailment during the ALCS, has a 4.40 ERA in 14 ⅓ innings this month.

State of the Dodgers

Clayton Kershaw will start Game 5 for the Dodgers. Though Kershaw has had two stellar outings this October -- one in the NLDS, one in the NLCS -- he allowed five runs in four innings in Game 1 of the World Series, reinvigorating discussion of his history of postseason struggles. He sports a 3.91 ERA across 23 playoff innings this year.