With the Padres expected to make another playoff run, more fans want to see games in person and the Padres are rewarding those willing to make a commitment. 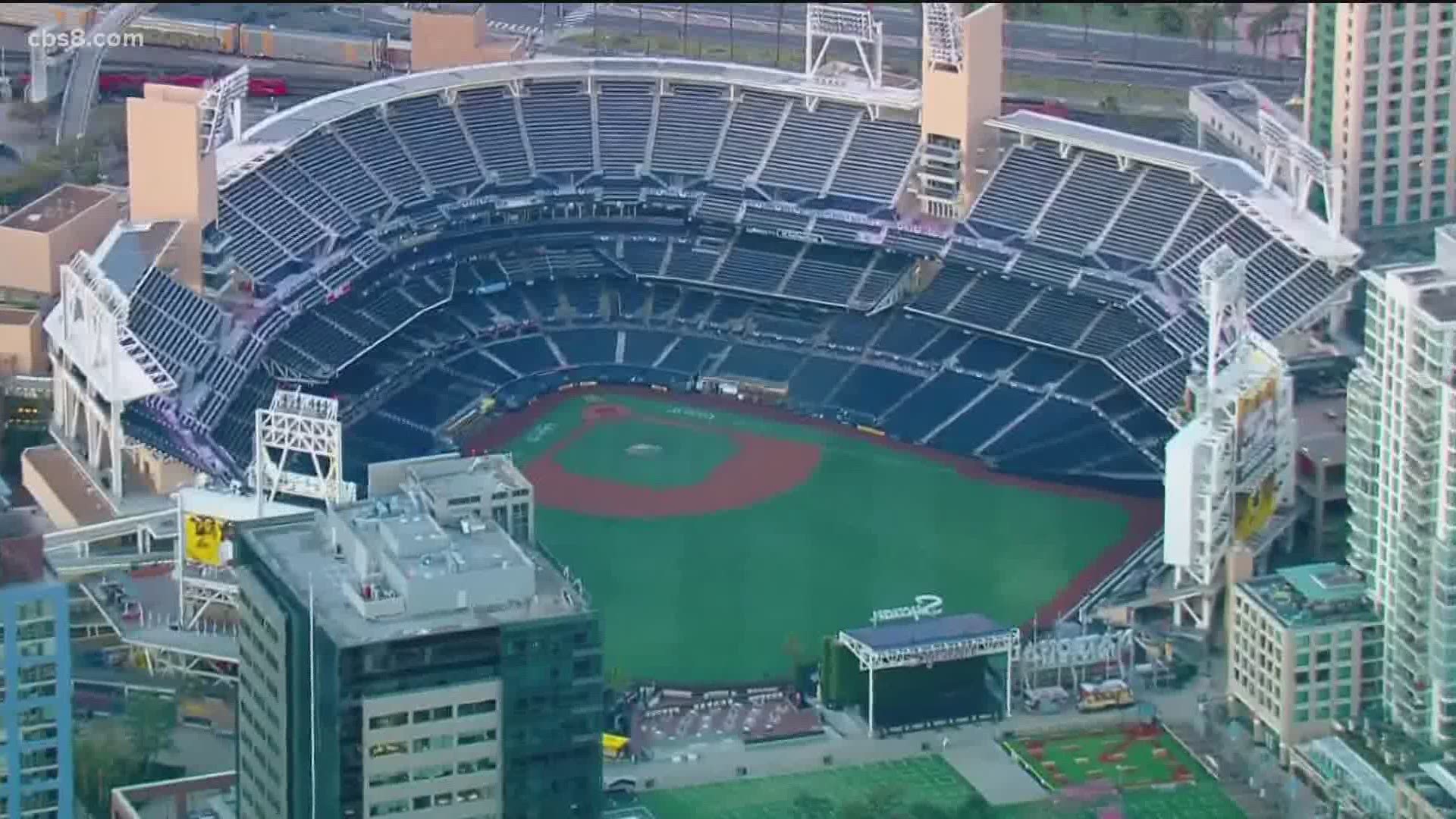 SAN DIEGO — When you combine all the excitement surrounding the San Diego Padres this season with Petco Park’s limited red tier capacity of 20%, it's no surprise to hear ticket agencies report our Opening Day prices are among the highest in all of baseball.

On Wednesday, News 8 spotted upper-level seats starting at $255 apiece on resale sights. That comes out to $656 for two tickets once you add the fees.

“Average get-in price for an MLB game for Opening Day is around $200,” said Jeff Gurian with Gametime Tickets. “Padres are among the more expensive side.”

Jeff said it’s a bizarre year because teams are waiting as long as possible before releasing seats. They’re doing that with the hope the county they’re in drops into a less restrictive tier that will allow more fans inside.

“If the tiers change, they can release more tickets and sell more and that might also change the seating configuration for how they socially distance fans," he said.

With the Padres expected to make another playoff run, more fans want to see games in person and the Padres are rewarding those willing to make a commitment.

“We've had a pretty significant increase in season ticket membership because it does get priority access as capacity increases,” said Padres CEO Erik Greupner. “So we've had a lot of new members who placed deposits to ensure that when we do increase capacity, they're going to be able to come watch the Padres play.”

Because of that bump in season ticket sales, team officials doubt a significant amount of seats will be available to the general public until the county falls into the yellow tier. That will allow capacity to increase to 67%. But until then, prices are expected to be higher than normal and that leads to warning - with the Padres such a hot ticket, buyers need to be aware of scammers selling fake tickets.

“Make sure you do your research,” Jeff said. “Buy from a trusted seller. I think the days of Craigslist and meeting someone on a street corner for tickets are over.”

And Jeff has another tip: Keep checking prices online, especially for games after Opening Day. News 8 found tickets on the resale market for games later in that same opening homestand have already dropped significantly including several for less than $40.

“If you can wait, I would advise doing so. There are probably better deals to be had," Jeff said.

And if you're heading to a Padres game this season check out the tips below to make sure you know the latest rules at Petco Park:

No bags will be permitted inside Petco Park except for medical and diaper bags that do not exceed 4.5 inches by 6.5 inches, such as small purses, clutches and fanny packs.

Outside Food and beverage is not permitted except for medical or infant needs. Guests are allowed to bring in one factory-sealed plastic bottled water that is clear and unflavored and does not exceed 32 ounces.

No paper tickets will be issued this year. Fans will need to download the MLB Ballpark App. Tickets will be sent to the app and the barcode will be scanned as you enter. Under the red and orange tiers, the Padres say it is doubtful the team will be selling any single game tickets to the general public. Tickets will only go to season ticket holders. That should change in the yellow tier.

Fans will no longer line-up at stands. Instead, ordering and paying for your food will be done through the MLB Ballpark App. You will receive a text when your order is ready for pickup. Currently, only beer can be delivered to your seat. This can be done through the app’s “beer me” tab.

Under the red tier, capacity inside the stadium is limited to 20%. Every other row has been blocked off and rows with seating have been sectioned off into pods of 2 to 6 seats.

Park at the Park

This area will be open, but socially distanced pods have been painted on the grass. Groups up to 6 people will be allowed in each pod.

WATCH: Tips so you don’t strike out when heading to Padres games this season