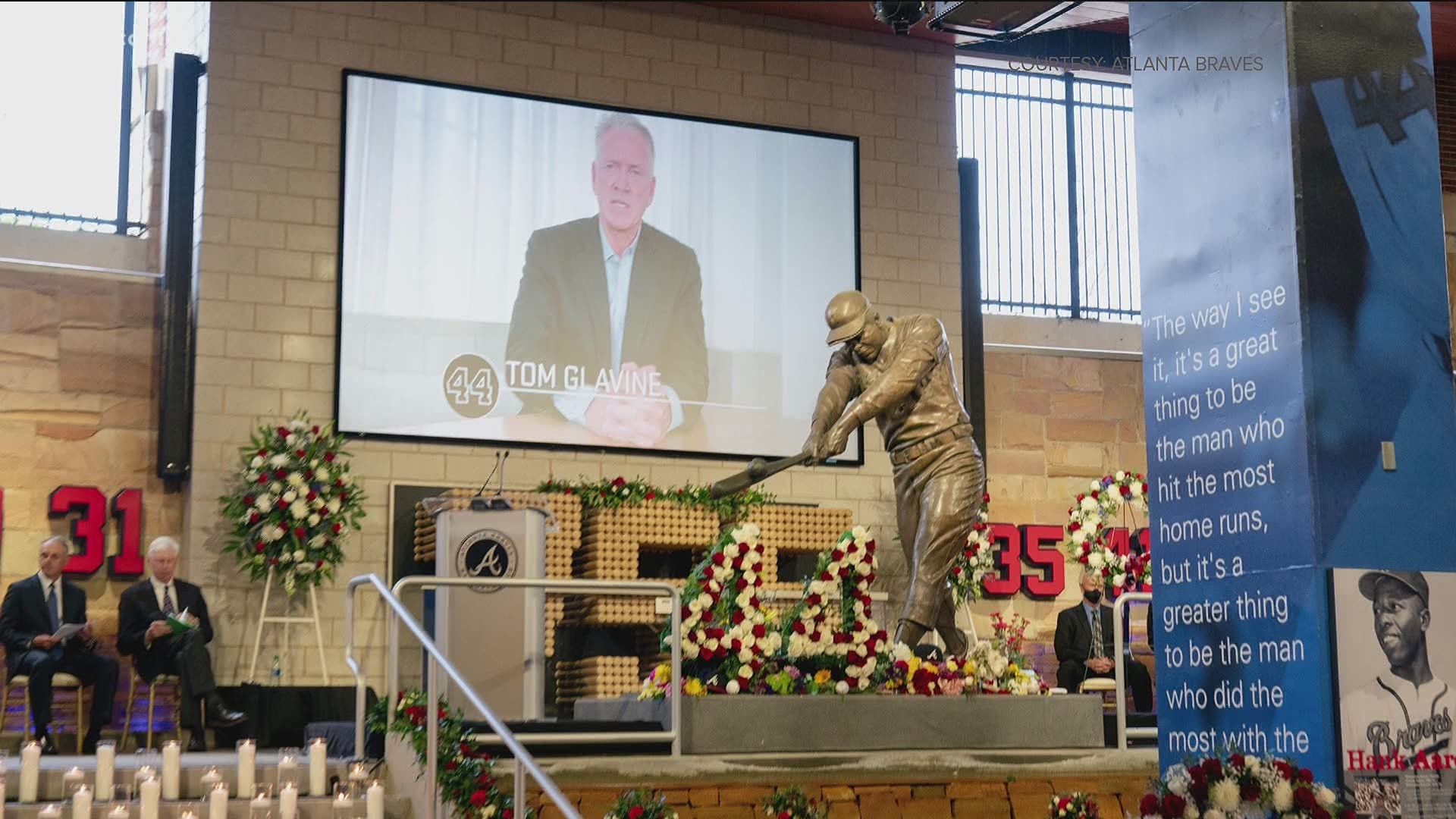 ATLANTA — A small group gathered near the Hank Aaron mementos inside the halls of Truist Park on Tuesday for "A Celebration of Henry Louis Aaron," a memorial service celebrating the life and enduring legacy of the late Hall of Famer and American icon.

Everyone shared personal memories of Hank Aaron, but the messages were all similar. Aaron was a humble man who cared more about the team and others than he did himself.

"He never was about himself," Snitker said. "He never talked about his accomplishments. There was always a humility and humbleness about him," he said.

Snitker said the reason he is here today is because of Aaron. He said he was a fill-in player on a rookie league roster. It was evident, he said, that his career as a player wasn't going to go much further.

"He gave me a chance to manage in the Braves organization," Snitker said. "And that's where I got to see him for the person he was - got to know him - and work with him."

Murphy, like others, said it was always different when Aaron was around.

"I felt something different when I was in his presence. There was something special about Hank," Murphy said. "Hank was the epitome of how we should all be as human beings."

Grissom, who met Aaron when he was a college ball player, said the baseball stats Aaron produced were all great, but the man off the field was even better.

Credit: AP
FILE - Hall of Famer Hank Aaron waves to the crowd during Baseball Hall of Fame induction ceremonies in Cooperstown, N.Y., in this Sunday, July 28, 2013, file photo. Hank Aaron, who endured racist threats with stoic dignity during his pursuit of Babe Ruth but went on to break the career home run record in the pre-steroids era, died early Friday, Jan. 22, 2021. He was 86. The Atlanta Braves said Aaron died peacefully in his sleep. No cause of death was given. (AP Photo/Mike Groll, File)

"We all talk about the numbers, the home runs, the stats. But I tell you, the man off the field was incredible," Grissom said.

An emotional Chipper Jones talked about the legacy Aaron left off the field and said Aaron was a transcendent figure in American history.

"I feel that if Hank were to have one last message for all of us, it would be to respect each other, to help each other, and to keep love in your heart," Jones said.

That was evident when Terry McGuirk, chief operating officer for the Atlanta Braves, alongside MLB Commissioner Rob Manfred, announced as part of the Atlanta Braves Foundation, the team would be creating the Henry Louis Aaron Fund to encourage minority participation in the game.

He announced that the team would seed the first $1 million. Manfred announced $500,000 from the league would be contributed, along with another $500,000 contribution from the MLB Players Association.

"I believe this is just the beginning of this growing fund," McGuirk said. "Rest assured, Henry Louis Aaron will always be a Brave and will always be so fondly remembered."

McGuirk said there would be many more tributes in the near future that would be announced at a later date.

The Atlanta Braves announced  Aaron's passing on Jan. 22. The Fulton County Medical Examiner's Office confirmed Monday to 11Alive the cause of death appears to be "natural."

A private funeral service will be on Wednesday, Jan. 27 at 1 p.m. at  Friendship Baptist Church. Aaron will then be entombed at South-View Cemetery at 1990 Jonesboro Road SE in Atlanta.

Aaron played 23 major league seasons and hit 755 home runs - the second most of all-time. He debuted with the Braves as a 20-year-old in 1954 and spent the next 21 seasons in a Braves uniform.