The 5-1 Cardinals have lost three in a row to the Wildcats. 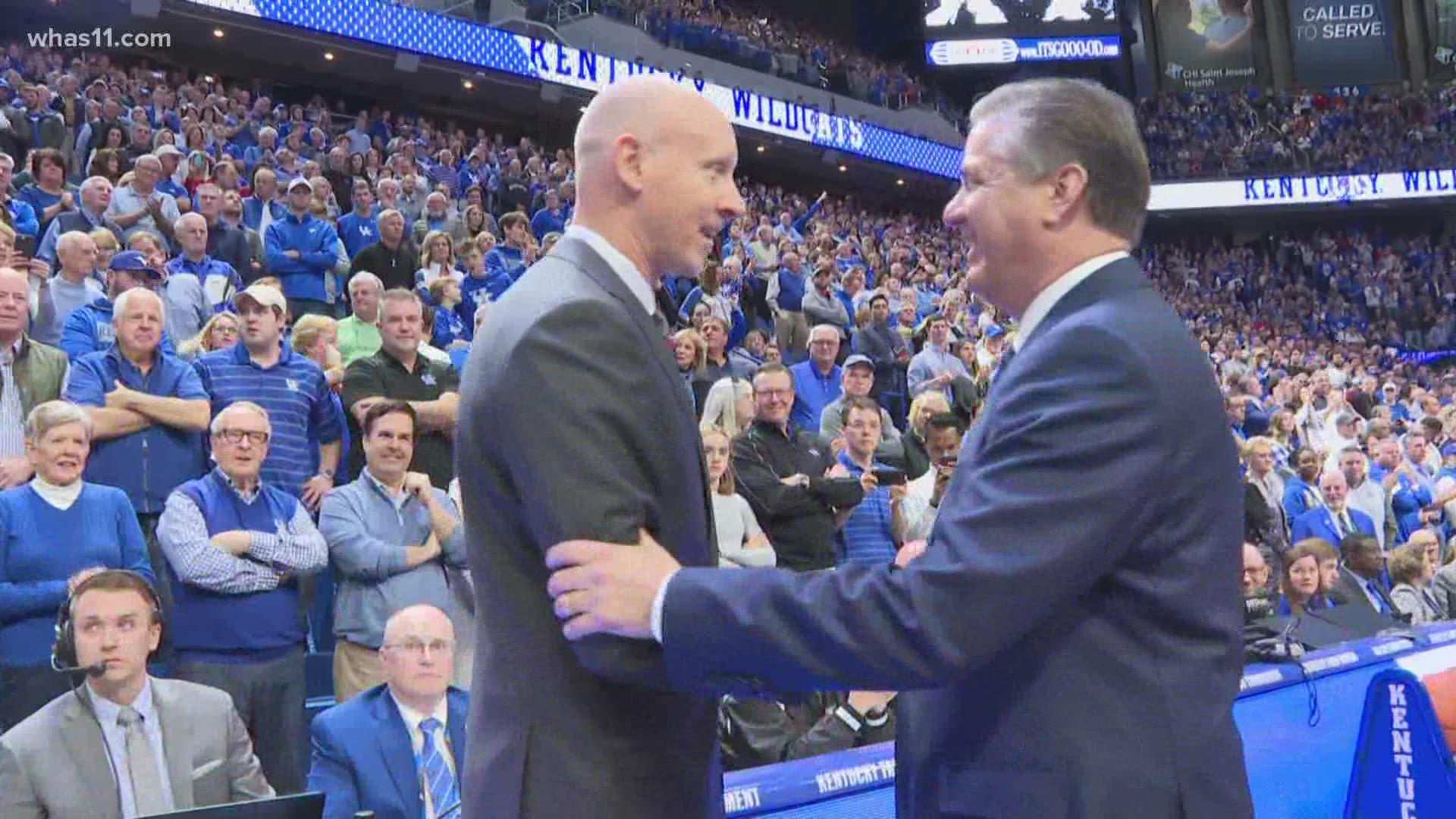 LOUISVILLE, Ky. — On Sept. 29, 2020 at 6:08 p.m., Louisville head men's basketball coach Chris Mack posted a video that shot some life back into one of college basketball's greatest rivalries.

"Whatever is most convenient for Coach Cal (Kentucky head coach John Calipari)," and then Mack slammed his fist. "We'll do it. See ya in the Yum! Center. Go Cards."

That back-and-forth between Mack and Calipari came as there were questions and accusations surrounding if, when and how Louisville and Kentucky would play in a season being staged during a pandemic. Now that the game is here, and even if it won't be played in front of the usual raucous crowd that accompanies it, no videos need to hype the matchup.

"You know about this game," Mack said. "It's part of the reason you came to a place like Louisville or come to Kentucky."

It's one where Mack and many UofL fans have to feel Louisville has its best shot to beat the Wildcats in a while, something it hasn't done since 2016 and accomplished just twice in the past 13 meetings. The 5-1 Cardinals host a Kentucky squad that is 1-5 for the first time in nearly a century and on its longest losing streak of the John Calipari era.

Like many who will play in this year's meeting, Cards guard Carlik Jones has never faced UK. But he said the team hasn't talked much about the Wildcats' recent rivalry dominance.

"We know about it," Jones, who admitted to learning more about the rivalry from teammates and fans, said. "But I wouldn't say we talk about it a lot. I know we want to win and are prepared for it."

Mack won't be underestimating the Wildcats either in pursuit of his first win vs. Calipari. While the results haven't gone the Cats' way, he's been noticing their effort, length and athleticism.

"I'm expecting a team that plays extremely hard on the defensive end," Mack said. "I thought we made some good strides at Pitt. But they're not Wisconsin. And Kentucky is a whole different animal in the way they play and the challenge they present."

To keep it tamed, he wants to cut down on turnovers. The Cardinals have 35 in their past two games, totaling 18 vs. Wisconsin and 17 vs. Pitt. Mack's problem with those is there have been too many careless ones.

"An experienced player, they have context of what's happening in the game," Mack said. "We've had two turnovers in a row, that's not the time to try to punch a gap when there's a couple players in there and make a play early in the shot clock. Now that leads to three turnovers in a row. Experienced teams don't do that and we're not experienced at times."

Neither are the Wildcats, whose offensive struggles this season are well-documented. They rank 273rd in the nation in scoring average (65.8 points per game), 228th in field-goal percentage (42.6%) and 302nd in assist-to-turnover ratio (.69). Mack isn't trying to help any of that improve by giving the ball away.

"I think we have to keep them as best we can out of the open court," Mack said. "And that goes hand in hand with how you're taking care of the basketball."

But the first Wildcat to come to Mack's mind when previewing Kentucky was an old ACC foe: Olivier Sarr. The transfer big man faced Louisville three times while with Wake Forest, with the most recent and successful outing coming last year in a Cardinal win. Sarr scored 16 points in 24 minutes while snagging six rebounds, four of them on the offensive glass.

"He gave us problems last year when we had two experienced post players in Malik (Williams) and Steven (Enoch) a year ago," Mack said. "Now, we have two freshmen. And so we have to do what we need to do make it a hard game on him."

Of course, Louisville has its own transfer star to flash in this game too. Jones returned to action after COVID-19 protocols caused him to miss the Wisconsin loss, where UofL's leading scorer and distributor was clearly missed. The former Radford star scored 11 points while dishing 7 assists, but shot a season-low 25% from the field.

The senior admitted it was difficult to get back into shape following his layoff, citing a "rough start" to conditioning.

"I think Carlik did an incredible job for a guy who hadn't practiced for so long," Mack said. "I think his stamina and his wind will be much better on Saturday than it was on Tuesday."

If Louisville wants to end its losing streak vs. its most bitter rival, it will need to be. That would certainly not be convenient for Calipari.

"Having conversations with my teammates, seeing on social media how crazy the fans are, it's definitely huge," Jones said of the rivalry.