The Cardinals worked out in front of fans for two hours as they hope to rebound this season. 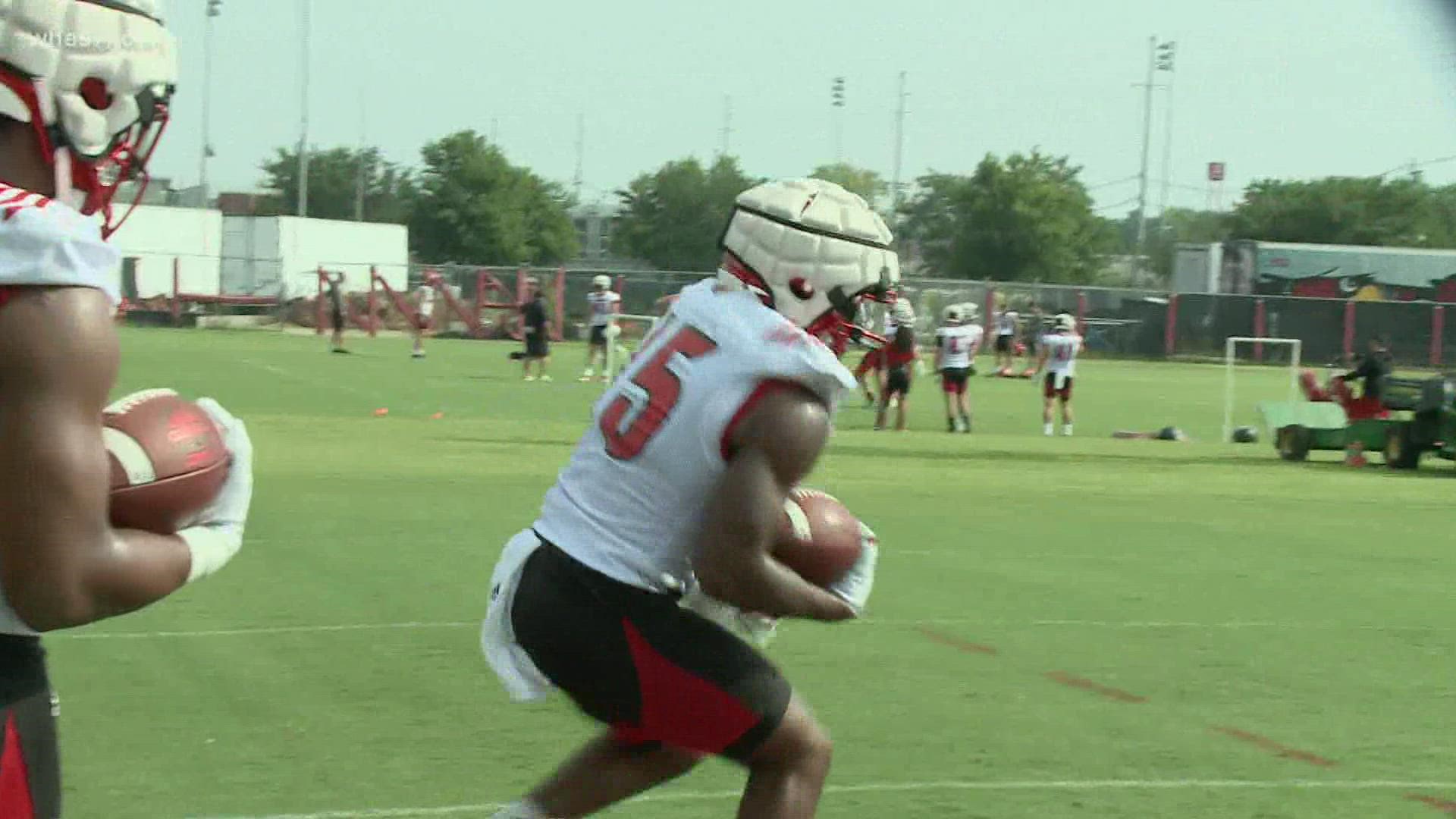 LOUISVILLE, Ky. — Entering his third season as Louisville football's head coach, Scott Satterfield has been noticing something about this group of Cardinals since January.

"We're a tighter bunch," Satterfield said. "The accountability they have for each other is different. And that's a different feeling."

He hopes that started to shine through to the fans in attendance Sunday morning, as UofL kicked off its fall camp with an open practice. The Cards worked out for two hours as 116 players took the field for the first time.

“It felt normal out there today,” Satterfield said. “Guys were flying around out there and competing. There was a lot of normalcy out there for the first time in a long time. I just like the way the guys competed for the first day.”

Here are some sights from the first day of fall camp for Louisville football. There's a good reel of Malik Cunningham throws before bouncing around the offense and defense during individual drills. Justin Marshall stood out. YaYa Diaby looks impressive too. pic.twitter.com/ldYZxzaNDX

It's a team featuring 43 new players, whether they came through traditional high-school signings, as graduate transfers or as junior-college players. There's a feeling-out process as Satterfield and his staff, which also features multiple new faces, get to know the players and vice versa.

Of course, there's no need to do that with the starting quarterback.

Malik Cunningham returns as a redshirt junior and the leader of Louisville. In a disappointing 2020 season where UofL went 4-7, Cunningham struggled, throwing 20 touchdowns and 12 interceptions while the team had the fourth-most turnovers in the country with 24. But Satterfield expects a rebound season for his signal-caller, who scored a combined 28 touchdowns with just five interceptions in 2019.

"He looked like he had a lot of confidence out there," Satterfield said of Cunningham on his first day of camp. "He's running the show and that leadership part has really, really gained over the past six months."

Of course, the pieces around him will need to step up after Louisville lost leading receivers Tutu Atwell and Dez Fitzpatrick as well as leading rusher Javian Hawkins. The Cardinals are counting on Tyler Harrell, Justin Marshall, Braden Smith and Jordan Watkins to contribute as receivers. Tight end Marshon Ford figures to have an expanded role after catching six touchdowns last year. And Jalen Mitchell, who impressed Satterfield with the strength he's gained, leads the running back group.

"We feel confident and good with those guys because of what they can do," Satterfield said. "They've made plays in games and they've gotten better throughout this summer. I'm excited about who's going to get these balls. Those guys are too. We've got some more balls to go around for these guys. What's going to be fun for me as a coach is to see who rises up."

Louisville lost Tutu Atwell, Dez Fitzpatrick and Javian Hawkins. But Scott Satterfield is confident in the arsenal of weapons surrounding Malik Cunningham to step up this season. "We feel confident and good with those guys because of what they can do." pic.twitter.com/samcuyqPCE

Defensively, Louisville has improved each year of the Satterfield era and expects to have its best unit since he took over. Linebackers CJ Avery and Monty Montgomery lead the way while Kei'Trel Clarke figures to break out more as a cornerback in the secondary. However, the starting safeties seem to be unclear as of now.

Georgia Southern transfer Kenderick Duncan brings the most experience, but has to learn Louisville's system. Outside of him, there are five freshmen and a sophomore. Chandler Jones is also working some at safety and cornerback.

"As we look through camp, that'll be one that'll be interesting to see how it unfolds and who gets the playing time," Satterfield said.

Cardinals athletics director Vince Tyra thinks his football team is underrated after being picked to finish next-to-last in the ACC's Atlantic Division. Louisville also has no preseason All-ACC selections. But Satterfield said he doesn't pay attention to those things at the start of an important third year.

"It really doesn't matter," Satterfield said. "I don't worry about preseason stuff. We want to be there on top at the end of the season."