The win — in front of a 50% capacity crowd of 7,652 — marked the first for LouCity under leadership of coach Danny Cruz. 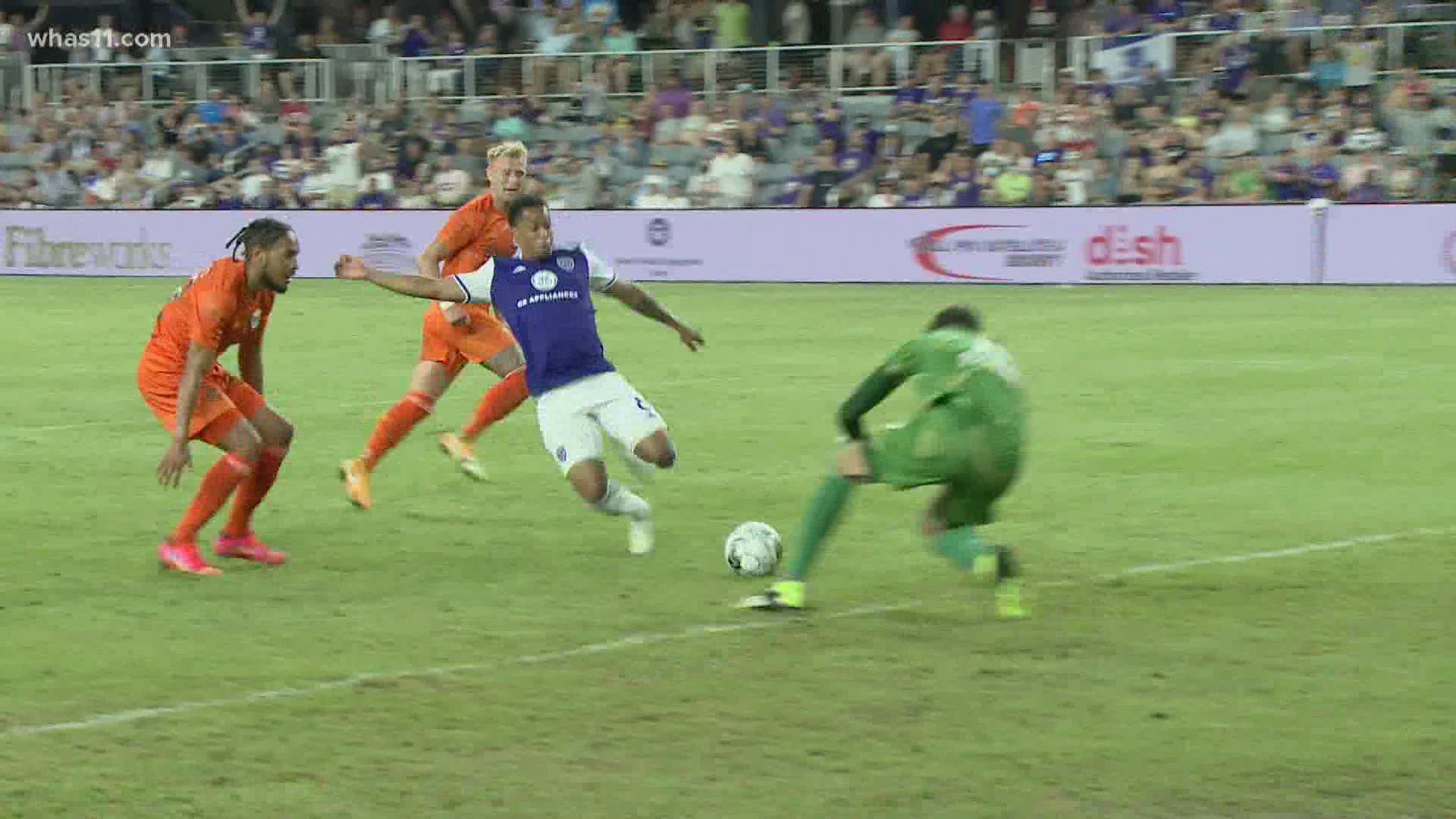 The win — in front of a 50% capacity crowd of 7,652 — marked the first for LouCity under leadership of coach Danny Cruz. On the opposing bench, it also came with a late red card and ejection of San Diego boss Landon Donovan, the U.S. Soccer legend tossed for failing to return to his coaches box.

The boys in purple improved to 2-0-1, making an unbeaten start to their 32-game USL Championship campaign.

"For me, certainly, I won’y downplay it," Cruz said, feeling the emotions of his first win. "It’s something I’ll never forget, in front of this group of fans, at this club. It certainly is a special moment for me.’

Having out-shot San Diego 20-11, with 16 of those tries from inside the box, LouCity found itself on the front foot Saturday. Still, the club nearly went into the halftime locker room with little to show for it.

That is, until midfielder Napo Matsoso was fouled in the area and the host side awarded a penalty. In stoppage time, forward Cameron Lancaster saw his initial try turned away by San Diego goalkeeper Trey Muse — a Louisville native — before finishing on a second chance.

"It was a great play by Napo," said midfielder Niall McCabe. "He sucked the defender in, felt the contact, went down and thankfully got a penalty. We hadn’t gotten one in a very long time. I think we were overdue on some.”

LouCity continued to threaten through creative combination play during the second half, with an 80th-minute change further keying the offense. That’s when forward Kyle Greig, who arrived midweek after three seasons with now-defunct Saint Louis FC, came on for Lancaster.

The veteran striker Greig nearly scored on his first touch as a cross caromed around in the box. Minutes later, in the 87th, forward Antoine Hoppenot turned over San Diego to spark a counter leading to a batted ball, handing in mid-air. Somehow, it rolled down the back of Greig’s leg, scooping into the net.

“Aggressive game, chippy, lots of fouls, lots of restarts, and that’s what I thrive on," Greig said. "(I enjoy) going in there and being able to put a body on somebody and fight and claw and just get myself into the box, because that’s where I know I do my darnedest.”

Donovan was dismissed in the aftermath of Greig's goal though his team did respond in the form of a Jack Blake screamer from distance in stoppage time. But by that juncture, the points appeared earned for LouCity, which ran out the minimum four minutes extra with ease.

A rare Western Conference opponent for LouCity, San Diego dropped to 0-4-0, while the boys in purple find themselves only two points behind the Eastern Conference’s Central Division lead holding a game in hand.