Tom Brady? Aaron Rodgers? Patrick Mahomes? Who takes the top spot and who was left out of the top 10. Check out Locked On NFL's top 10 QBs for 2021. 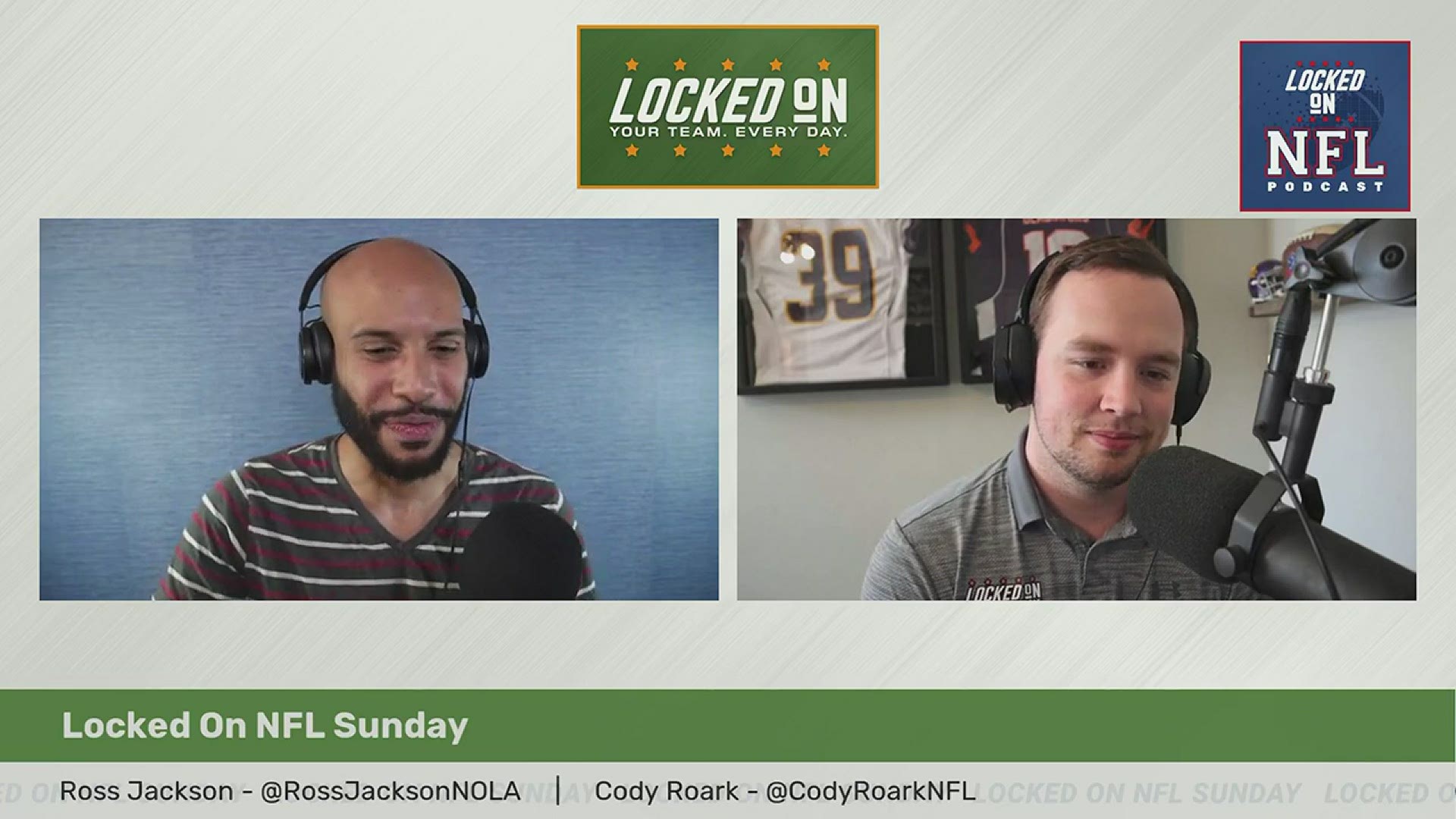 NEW YORK — We're in that slight summer lull in the NFL between mini camps and the start of training camp, so it's a perfect time for some position rankings.

Typically, there's a lot of agreement at least who the top few quarterbacks in the NFL are at this time and that includes Aaron Rodgers, Patrick Mahomes, Russell Wilson and Tom Brady.

But there's a lot of speculation on who fills out the backend of the top 10. That includes veteran QB's like Matthew Stafford, Matt Ryan, Kirk Cousins and Ben Roethlisberger, but also young up-and-comers like Arizona's Kyler Murray and Los Angeles' Justin Herbert.

On Locked On NFL, hosts Ross Jackson and Cody Roark went through the top 10 quarterbacks coming into 2021 as voted on by all of our Locked On NFL local team experts.

SUBSCRIBE: The Locked On NFL podcast is your daily NFL podcast on league news, rumors and analysis. Listen for free wherever you get your podcasts.

Leading the Titans over the past two years, Ryan Tannehill has solidified himself as a high-level NFL quarterback. In back-to-back years, Tannehill helped lead the Titans to the playoffs.

Last season, he passed for 3,819 yards with 33 touchdowns and seven interceptions and a 66.5% completion percentage.

It's hard to deny that Tannehill benefits from play action thanks to the best running back in the league standing behind him for most snaps. Whether that means he doesn't belong on the list is a convoluted argument.

Either way, since he took over the starting job for Tennessee in 2019, they're 18-8 in the regular season with two playoff appearances.

With the blockbuster addition of Julio Jones to line up opposite of A.J. Brown, Tannehill has a shot at a monster year.

As a diehard Lions fan myself, that's the first time I've typed "Matthew Stafford, Los Angeles Rams" so that was odd.

Bias aside, there's no denying Stafford has had one of the NFL's best arms throughout his career in Detroit. While that didn't translate into playoff teams, he's obviously joining a team this year with exponentially higher potential.

Stafford topped 4,000 yards for the eighth time in his career last season and he'll join a crafty Sean McVay offense.

"That's an interesting one, and we'll see," he said. "There's gonna be a change in offensive scheme, he's going to be hanging out with his buddy McVay, but I don't know, that's interesting."

The Dallas Cowboys have committed to Dak Prescott for the foreseeable future after a four-year $160 million contract earlier this year.

The 27-year-old suffered a compound right ankle fracture and dislocation last season, forcing him to miss the rest of the year after just five games.

In 2019, Prescott passed for nearly 5,000 yards, throwing for 30 touchdowns and 11 interceptions on a 65.1% completion percentage. He can also get it done with his legs. He had six rushing touchdowns in each of his first three seasons in Dallas, and three in each of the past two seasons (including three through five games last year).

He has a strong receiving corps to work with in Amari Cooper, CeeDee Lamb and Michael Gallup. If he can stay healthy, the Cowboys should be contenders in 2021.

The 2019 MVP had somewhat of a comedown year statistically in 2020, but he still led the Baltimore Ravens to a playoff win over the Tennessee Titans.

Jackson threw for 2,757 yards and 26 touchdowns in 2020 with nine interceptions and a 64.4% completion percentage. But, he's one of the most dangerous quarterbacks in the league because nobody can do what he can with his legs.

For the second-straight season, Jackson rushed for more 1,000 yards and seven touchdowns. The former MVP should have the Ravens in a good spot again in 2021.

Credit: AP
FILE - In this Dec. 27, 2020, file photo, Houston Texans quarterback Deshaun Watson throws a pass during an NFL football game against the Cincinnati Bengals in Houston. One of the 22 women who have filed lawsuits accusing Watson of sexual assault and harassment has dropped her case, citing privacy and security concerns after some of the women were ordered to make their names public following court hearings recently. In court documents filed late Tuesday, April 13, 2021, the woman's attorney, Tony Buzbee, said she "reserves the right to refile the case once such concerns are addressed." (AP Photo/Matt Patterson, File)

This one has a bit of an asterisk because Deshaun Watson may not even play in 2021. We really don't know yet but there is a good chance he could end up on the commissioner's exempt list as investigations into sexual assault allegations against the Texans star play out.

That aside for now, Watson led the entire NFL in passing yards last year with 4,823 yards despite losing his No. 1 option and top-NFL talent at receiver in DeAndre Hopkins.

Watson's completion percentage was over 70% and he threw 33 touchdowns and seven interceptions.

If Watson does not play this year, he would be removed from this list and Falcons quarterback Matt Ryan would move into 10, as the current No. 11 as voted on by the Locked On NFL hosts.

Credit: AP
FILE - In this Jan. 24, 2021, file photo, Buffalo Bills quarterback Josh Allen looks to throw a pass during the first half of the AFC championship NFL football game against the Kansas City Chiefs in Kansas City, Mo. Bills general manager Brandon Beane faces making two critical high-priced decisions by Monday, May 3, 2021, in determining whether to commit some $35 million in combined salary to pick up the fifth-year options and retain the rights of quarterback Josh Allen and middle linebacker Tremaine Edmunds through the 2022 season.(AP Photo/Charlie Riedel, File)

Last season, Allen led the Bills to a 13-3 record, completing 69.2% of his passes. He threw for over 4,500 yards and had 37 touchdowns passing and eight more rushing.

"I love seeing Josh Allen in the top five," Locked On NFL's Ross Jackson said. "He absolutely deserves it, he had a big ascension last year and I'm really interested in seeing if he can take another step forward in 2021. If he does that, it would put him in MVP conversations."

The Bills went all the way to the AFC Championship game last year. Big things are expected out of them again.

The GOAT! Some might say Brady should be No. 1 on this list, some Brady haters might say he belongs on the backend, but here he is at No. 4.

The 43-year-old did the unthinkable last offseason, leaving the New England Patriots to play for the Tampa Bay Buccaneers and what happened? He took them to the Super Bowl and won it.

Brady threw a whopping 40 touchdowns last year and had 4,633 passing yards while completing 65.7% of his throws. He's 43 years old and he's showing no signs of slowing up. Brady has been to four of the last five Super Bowls, winning three of them.

If the season ended after five weeks last year, he would've been the MVP, but his stats pulled up despite leading the Seahawks to a 12-4 record and another playoff berth.

The 7x Pro Bowler will look to drive the Seahawks to their first Super Bowl appearance since the 2014-15 season.

It's undisputed that Aaron Rodgers is a consistent top 5 or even top 3 NFL quarterback. He was the NFL's MVP in 2020, his third time winning the award.

In 2020, Rodgers had the best completion percentage in the NFL at 70.7% and the most passing touchdowns with 48. He threw for nearly 4,300 yards and threw just five interceptions all year as he led Green Bay to a 13-3 record.

Is Rodgers going to play in Green Bay next year? Who knows. He skipped mandatory mini camp as reports have funneled since the end of the year that he's very  unhappy with the Packers' front office. If he's on the Packers, they're a Super Bowl contender. If he's on any other team next year, they're a championship contender. So that's that.

He's a generational talent and you really can't blame anyone for giving him the No. 1 spot on their lists.

Patrick Mahomes won the MVP in 2018, his first year at the Chiefs' starting quarterback. He's now taken them to back-to-back Super Bowls (1-1).

Mahomes changes the game. And as long as he's healthy, the Chiefs are going to be title contenders every year.

Coming off a Super Bowl loss to Tom Brady, Mahomes will come in hungry next season to take the Chiefs back to the promised land.

SUBSCRIBE: The Locked On Today podcast hosted by Peter Bukowski gets you caught up each morning on the biggest stories without taking up your free time. Listen here.