The Elizabethtown native is leading Louisville as it hosts an NCAA Tournament Regional for the first time. 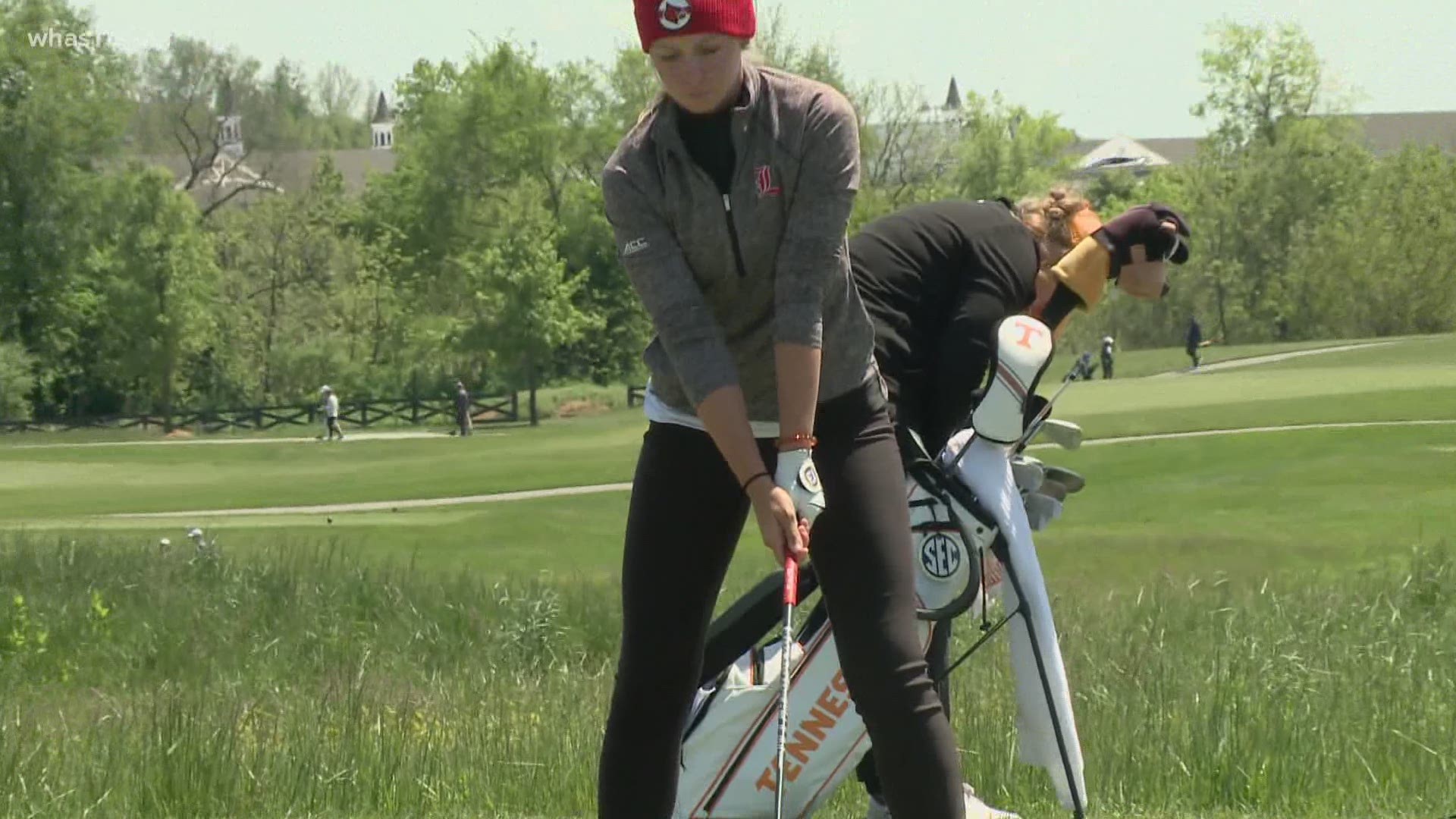 SIMPSONVILLE, Ky. — Like the rest of her Louisville women's golf teammates, fifth-year senior star Lauren Hartlage feels right at home at the University of Louisville Golf Club for an NCAA Tournament Regional.

"We play out here every day," Hartlage said. "So I know the course really well and I was just ready to go out and have some fun."

But she also feels at home for another reason: a tailgate in the parking lot filled with family and friends. Her parents, sister, grandmother and more are making sure she feels the hometown love.

"Everybody knows where we're at," Lauren's mother Kim said. "We get to watch her play golf, but then after she's done, we're not really around her from that standpoint. So for us, it's just kind of relax, go over the round, sit back and enjoy the day."

It started with Louisville football games and grew from there to hit the road for all kinds of sporting events. The Hartlage family has become well-known for its festivities and one menu item: homemade pretzels.

"We have some pretzels that we make with our special recipe that's been handed down through our family," Kim Hartlage said. "And so we've kind of gotten a little bit of notoriety for our pretzels."

But also for what holds their refreshments. When Louisville needs some birdies, the group pulls out red koozies with Cardinal logos and "Birdie Juice" labeled on them.

Then, when UofL is done with its round, they switch to blue koozies with "Bogey Beer" and a water splash to try and bring down the opponents.

"It's UK colors," the group explained while laughing.

The family's tailgating skill is on par with its golf game. Kim played collegiately at Western Kentucky and later was the head coach at Elizabethtown High School. Her kids grew to play too, with Lauren actually taking lessons at the course she's now trying to lead her team at this week. Well before that, she won a parent-child title with her mom and eventually played under Kim as a high school golfer.

"Lauren took it another step further and was able to go to college," Kim Hartlage said. "She's progressed so much more than I've ever imagined."

Coming back for a fifth season thanks to extra eligibility offered due to the coronavirus pandemic, Lauren Hartlage has continued to leave her mark on Louisville. With an improved mental game that she credits to not being as hard on herself, she's one of just four Cardinals to be an All-ACC honoree at least four times and the program's record-holder for most top-10 finishes.

"Being close to home, I kind of grew up a Louisville fan," Lauren Hartlage said. "And being able to be a part of the team here for my fifth year has been an awesome experience."

Hartlage is also slated to help represent the United States in the Palmer Cup, a Ryder Cup-style tournament featuring the top male and female collegiate golfers, against an international team from June 11-13. She's already played in the Augusta National Women's Amateur as well.

"Some of the opportunities she's had have just been eye-shattering," Kim Hartlage said. "I get tears just thinking about her opportunities that she's had. It's been actually just a dream for everybody in our family."

None are more meaningful than the one she has now. In her last collegiate season, the star is leading Louisville as it hosts an NCAA Tournament Regional for the first time in program history. Through one round, she is just a stroke off of the individual lead, in a tie for third at three-under after shooting a first-round 69.

"I didn't expect to be here for the fifth year, being able to play at my home course," Lauren Hartlage said. "But I was super excited."

"This week has been a little more calm, to be honest with you," Kim Hartlage said of the experience. "I don't know, I can't explain it. Maybe that's why she played well today because I wasn't too upset about shots. It just kind of came natural to her today. And hopefully that spills over the next two days."

"She's like the hometown hero, the girl next door," Young said. "So everyone's rooting for her."

Including her family that's scattered around the course watching her.

"Being able to have the support means a lot and knowing that I have a lot of people that support me definitely helps out," Lauren Hartlage said.

And the same family that's waiting in the parking lot for her.