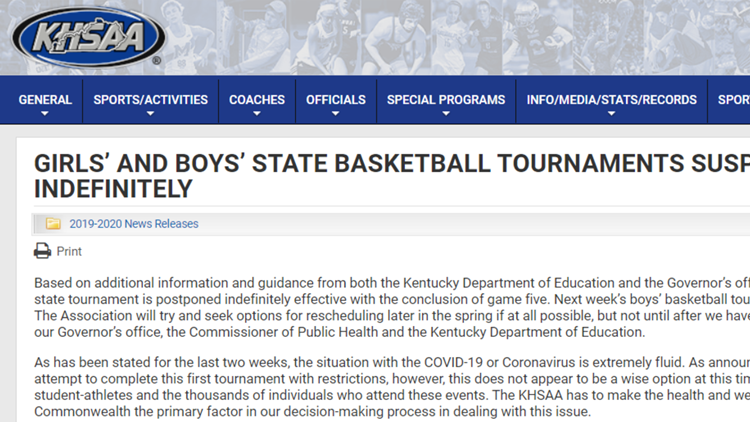 The KHSAA announced the decision after originally suspending ticket sales and only allowing essential people attend. The tournament was being held at Rupp Arena in Lexington.

In its statement, the KHSAA said the situation with COVID-19 is fluid, and it does not seem to be in best interest of players and fans to continue the tournament. Refund options will be coming later today, KHSAA said.

"The Association will try and seek options for rescheduling later in the spring if at all possible, but not until after we have received collaborative approval from our Governor’s office, the Commissioner of Public Health and the Kentucky Department of Education," the announcement said.

The Indiana High School Athletic Association said state tournaments will continue, but with limited to no spectators on Thursday.

IHSAA released the following statement on the postponement of the boys' state basketball tournament.

Kentucky Gov. Andy Beshear has advised Kentuckians to avoid large gatherings. The NCAA March Madness Tournament and the NBA and NHL seasons have been suspended at this time.

This is a developing story. Check back for updates.