Boat Racing, LLC is one of the ownership groups involved with Hot Rod Charlie. 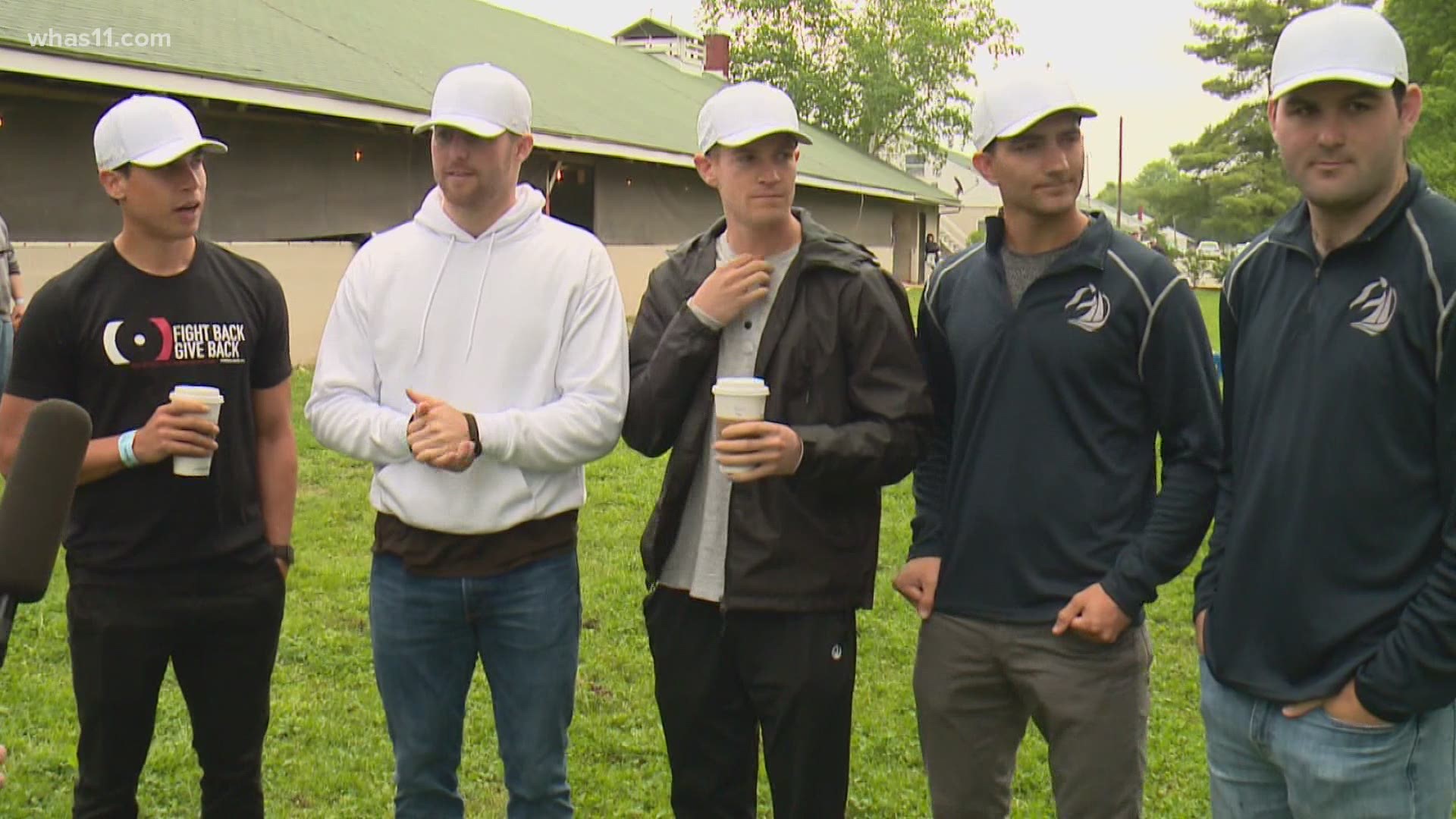 LOUISVILLE, Ky. — Since Patrick O'Neill could start walking, he was around a horse racing track.

"The joke amongst my family was that I was born in a stall," O'Neill said with a laugh.

The kid in those pictures would grow up to attend and play football Brown University. There, he'd have horse racing on the television in his house, where his friends would join to watch.

"And I think it was something that was just kind of a weird, quirky obsession in their opinion," Patrick O'Neill said. "Quickly, they realized with the 2012 Kentucky Derby happening when we were freshmen, that it was more than just something that I liked on the side. It was actually a family business."

That is one of the two Derby races Doug O'Neill won, taking the Run for the Roses with I'll Have Another. The family business goes back to Patrick's grandfather. His four sons in Dave, Danny, Dennis and Doug followed.

Dave, Patrick's father, eventually passed away due to melanoma. But he stayed in touch with Dennis and Doug, who continued to rise in the horse racing ranks as a bloodstock agent and trainer.

Eventually, some of those friends who watched it in the house started to agree with him. Eric Armagost, Dan Giovacchini, Reiley Higgins and Alex Quoyeser all played football with O'Neill, were in the same fraternity together and even lived in the same house before going their separate ways for a bit after graduation.

After keeping in touch and taking some trips together, the young businessmen all ended up in California. In 2016, Doug O'Neill won a race at Del Mar with some of them present.

"We were talking about and brainstorming ideas of bucket-list experiences we can experience together," Higgins said. "And that happened to be at Del Mar, and Doug won a race. We had an amazing time."

"Everyone has a text chain and everyone has a snowboarding trip," Patrick O'Neill said. "But how do you take that next step?"

"And that's when we started kind of talking about possibly getting an ownership together," Quoyeser said.

That's how their current group in Boat Racing LLC came to life. It's one of three groups, along with Roadrunner Racing and William Strauss and Gainesway Thoroughbreds, Ltd., that own Hot Rod Charlie. The fraternity brothers' name for it is based on a beer drinking game from their college days.

"There are a lot of ownership groups that end in 'racing,'" Higgins said. "And I think it's just kind of a cheeky way to reference our past and how we all met."

"Did we ever think that we would be explaining on camera at Churchill Downs at the 147th Kentucky Derby that we represent Boat Racing," Patrick O"Neill asked. "No."

Yet here they are, hoping Hot Rod Charlie can speed out of post nine and win at 8-1 odds to cap off an unforgettable week for these new owners, plus make Doug O'Neill just the seventh trainer to ever win the Kentucky Derby three times.

"I'm convinced that horses are mirrors of us," Doug O'Neill said. "They bring so much youthful energy to the barn and to Charlie. You can just see Charlie feeding off all the positive energy."

It's getting more and more nervous amongst the competitive group of 28-year-olds as the race approaches. But they're still confident.

"We've prepared the right way, thinking about football," Patrick O'Neill said. "We got in the film room, we had an amazing Tuesday practice with full pads. We had our Wednesday and Thursday practices with shells. We had our amazing walkthrough on Friday. The coaches have the perfect game plan. The players are mentally sharp."

And if all of that adds up to Patrick O'Neill posing for a picture in the most famous Winner's Circle with his uncle and brothers, the celebration will be memorable.

"Watch out, Louisville," Eric Armagost said. "We got a big crew coming in."

"I can tell you right now: We'll be partying, that's for sure," Doug O'Neill said.

But that's likely happening no matter what.

"Win, lose or draw with this group, they celebrate life every day," Doug O'Neill said.

"Life is about people," Patrick O'Neill said. "It's about memories and it's certainly about experiences just like this one."