If the essential backside employees, can't come to an agreement with Churchill Downs, they could decide to strike during Louisville's biggest event. 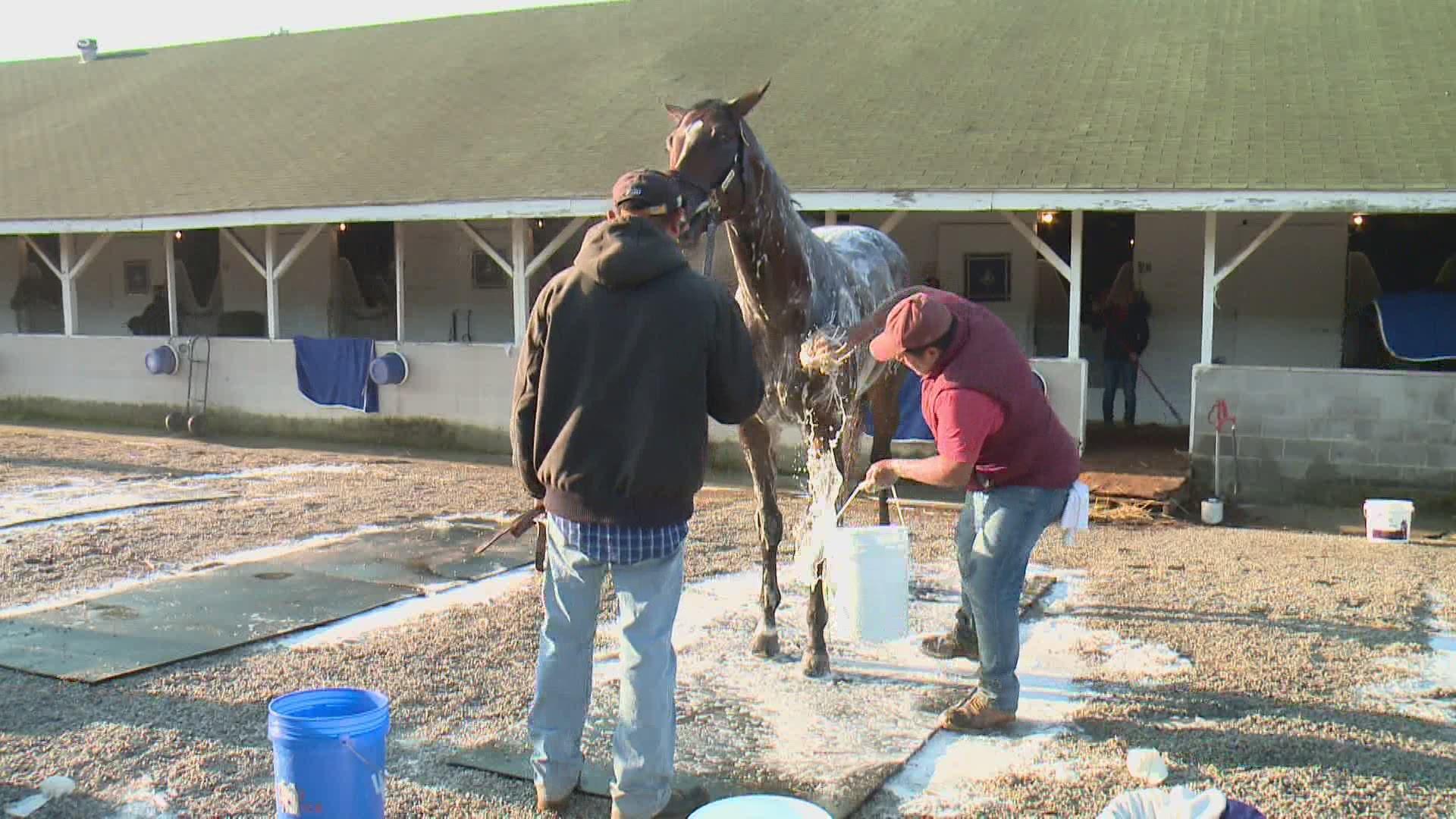 LOUISVILLE, Ky. — If Churchill Downs and the union that represents racetrack employees do not come to a contract agreement, Derby day won’t be running as smooth as normal.

Just days before the Run for the Roses, the Service Employees International Union (SEIU) has approved a potential strike by Local 541 — now it’s up to those employees to decide if they will call a strike.

The employees striking would be valets, those working behind the scenes at Churchill Downs saddling horses and making sure the race is safe and compliant to regulations.

They’re essential to the sport, and often have decades of experience. Now, they say they are asking for a fair contract and better wages.

David O’Brien Suetholz represents the union, which is not only looking for better pay, but a certainty that they will have jobs for the next three years.

"We’re very concerned that Churchill could just start not fielding enough horses, not looking for horses, and therefore cut their costs by shaving the number of valets on a normal race day," Suetholz said.

The decision to strike is up to the valets. Suetholz said the decision is not made lightly, and would be considered a last resort. Valets would form a picket line on Derby day, and someone else would have to perform their essential roles.

"I would imagine that Churchill executives would actually get dirty on the Derby and would saddle the horses themselves," Suetholz said.

The Greater Louisville Central Labor Council, which is a group of unions in the city, is meeting Wednesday night to discuss how members will support Local 541.

Members of other Louisville unions would likely staff the picket line. It could also mean other track employees, like the parimutuels who take bets would come out to picket.

On Friday, SEIU Local 541’s Executive Board President Don Vest said in a release, “The parimutuel clerks stand in full solidarity with valets who have been patiently waiting for a fair contract since last fall. They have informed the valets that they will honor the picket line if they choose to go on strike tomorrow.”

The absence of 200 parimutuel clerks means hundreds of betting stations would shutdown, causing disruption to people trying to place bets.

Suetholz said it will also force fans to make a decision.

"Everybody who wants to attend the Derby is going to have a moral question of whether or not they honor the work of these people and honor their picket line, and thus decide not to cross," Suetholz said.

Suetholz said the union is asking for an additional $27,000 total, spread across about 30 employees. They also want a contract to standardize wages across the board of $20 per hour no matter where races are held.

Suetholz said Churchill has not made an effort to come to an agreement, and the clock is ticking.

"In 2021, working people are tired of the corporate abuses, and I actually feel like people are ready to push back," Suetholz said. "So if the phone doesn't ring, stay tuned."

While it is not unusual for the Kentucky Derby to be used as a platform for awareness, we regret that in this situation, there are factual inaccuracies reported by those attempting to leverage the Derby that affect our valued team members and potentially the critical work they do at Churchill Downs Racetrack. Valets are Churchill Downs seasonal employees whose primary role is saddling and unsaddling horses. Additionally, they may be employed by individual jockeys to care for tack and personal items.

The last and best offer by Churchill Downs Racetrack, which  that was unanimously rejected by the Union, included:

A pay increase for 2022 that is nearly 6% - double the typical cost of living increase. There is more than a 4% increase offered for 2023.

Special pay for Oaks/ Derby and holidays, including the Oaks/Derby bonus which would increase throughout our proposed agreement.

These wages also do not include additional pay that valets may receive from jockeys for work jockeys hire them to do. The payment percentages that many valets are eligible to receive from jockeys are based on winnings earned and those amounts have increased over the years as we have worked to build purses at Churchill Downs (purses increased by $3.1 million this Spring Meet alone).

Churchill Downs’ proposed wages are higher than any wage offered by any other track in the region, with comparable racing dates.

RELATED: Kentucky Derby 2021: How to watch and how to bet